Paint by the Penny 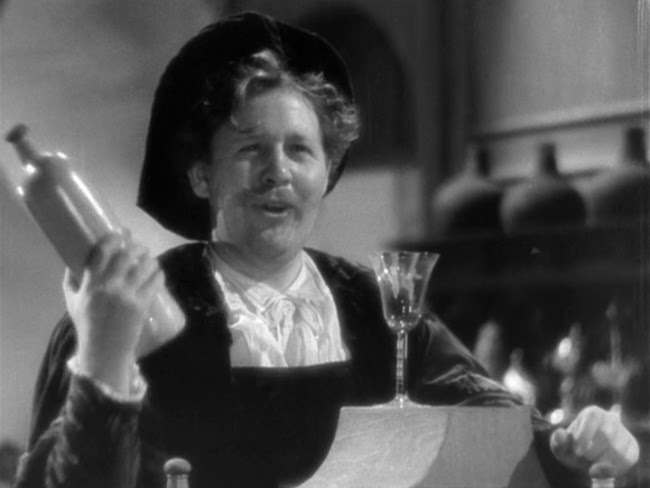 History is filled with artists who became successful after death. Rembrandt van Rijn, although he died in poverty, wasn't quite one of them, but Alexander Korda's 1936 film Rembrandt focuses on the lack of appreciation for Rembrandt and his works in his latter years. At times simplistic in its moralising, the film is for the most part a very good depiction of the artist and his world with absolutely wonderful performances from Charles Laughton and Elsa Lanchester. 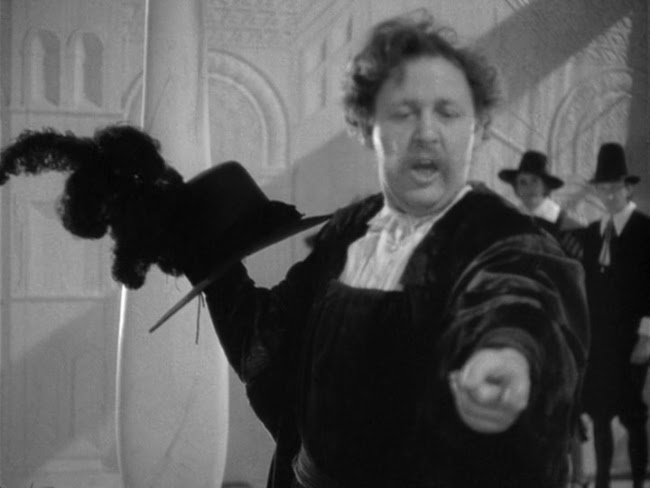 This is the thinnest I've ever seen Laughton who bears a pretty good resemblance to the painter's self portraits. Korda seems to have been well aware of the acting powerhouse on his hands and Laughton's Rembrandt casts a spell with his voice, musing beautifully on his love for his first wife, Saskia, silencing a crowded tavern with his display of reverence, or humbling a sarcastic beggar (played by Roger Livesey) with an earnest and sober oration on King Saul. 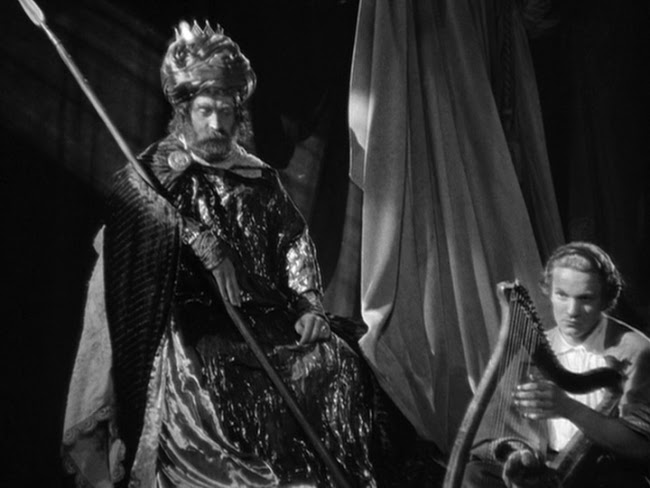 The film begins at the height of Rembrandt's good fortune. He has a large home and three servants. Then two misfortunes befall him--his beloved wife, Saskia (whom we never see), dies and the début of what is to-day considered one of his greatest paintings, commonly called The Night Watch, is met with ridicule that begins a popular dislike of Rembrandt and his style. 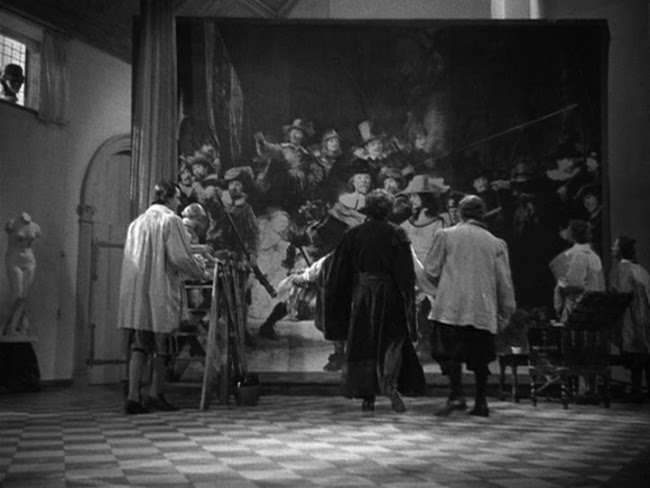 According to Wikipedia, the idea that The Night Watch was considered a failure when it was first shown is not true though the story has been around for centuries. But it's true that Rembrandt's career went into decline as his paintings became less fashionable. Getting drunk with his servants after the painting's début, he gives a speech in this film I rather liked:

"What is success? A soldier can reckon his success in victories. A merchant in money. But my world is insubstantial. I live in a beautiful, blinding, swirling mist." 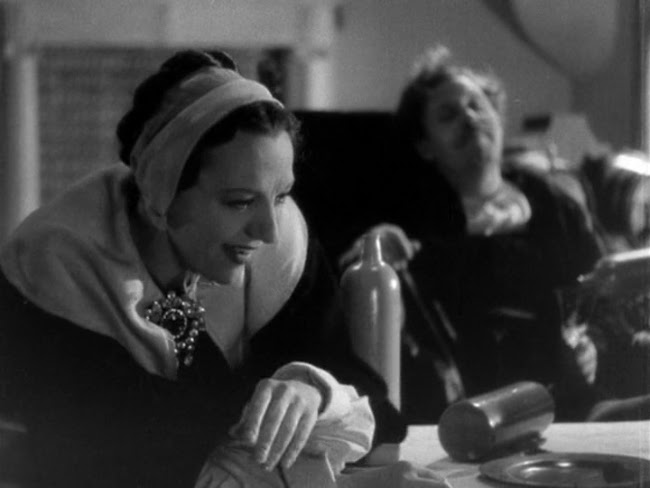 Legal complications surrounding a fortune belonging to his wife--which he never received--being required to be divided between himself and his son if he remarries prevents him from marrying again--he can't divide the fortune he doesn't have and his son can't renounce the claim because he's not of age. So he takes a lover, his servant Geertje (Gertrude Lawrence), who ends up being an opportunist who treats him badly. He runs away from her and tries living in the country with his father and brother where he grew up but finds the life just isn't for him. He returns to Amsterdam and falls in love with Hendrickje, played by Laughton's real life wife Elsa Lanchester. 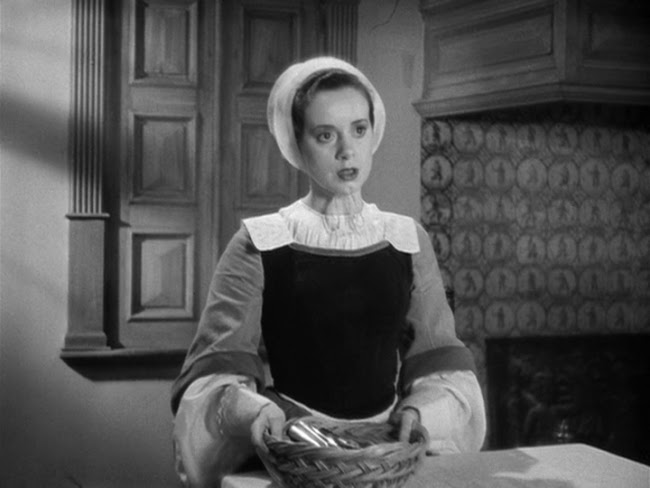 She's a servant employed by Geertje and he immediately wants her to pose for him. Unlike Geertje, she has a genuine love for him and his work and figures out a way to use the tangled laws to their advantage when debtors won't allow Rembrandt to sell his own paintings. Since she can't become his wife, she becomes his employer and takes legal possession of all the paintings her employee produces. Watching Else Lanchester's face light up as she gets the idea from an analogy about a fish monger is one of the film's great delights. 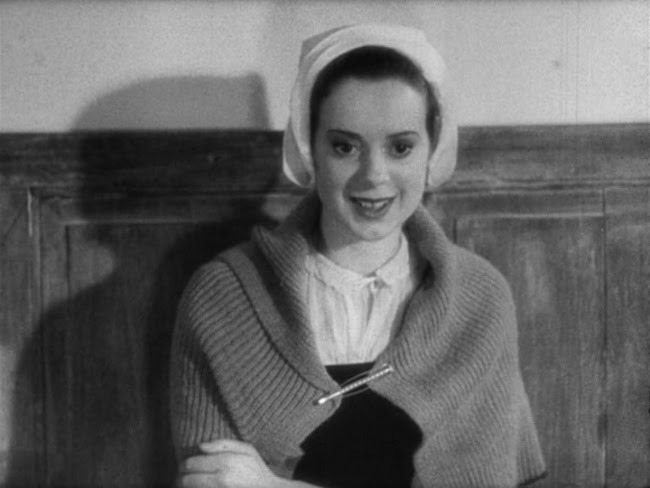 Seeing her and Laughton together is another and it's a shame they didn't appear in films together more often. 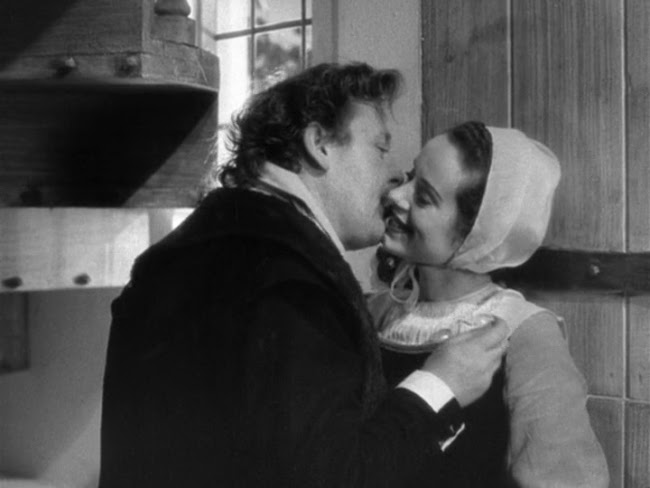 A knowledgeable slice of cheese went by
Unnoticed, crossing dairy lines to stick
Forever, bound to lunch like wheat or rye,
Or quesadilla clouds adrift and quick
For what won't freeze a pastry robs the jam
Of doughnuts past and bear claws yet to come
Directly plucked from fixed finger ham
The reddened digits hold to grab the sum
The lot of endless dripping faucets hot,
Redacted plumbing jobs that keep the Feds
In files strangely vexed by absent rot,
Organic matter kept from flower beds
In view of rivers under golf courses
And beetles under plastic pink horses.

Posted by Setsuled at 11:38 AM
Email ThisBlogThis!Share to TwitterShare to FacebookShare to Pinterest