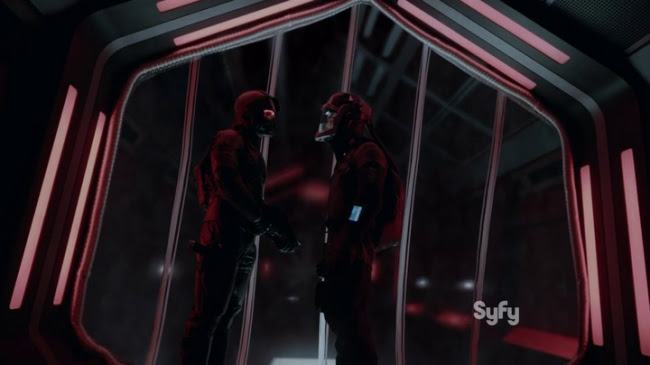 it seems like the SyFy channel has freed itself from the reality television model it unwisely adopted years ago. It seems like they have quite a few actually, genuinely Sci-Fi series on the air, more than one, even, so it's not like they're hanging their hat on a new Battlestar Galactica. At the recommendation of my friend Ada, who's reading the books upon which the show is based, I've watched the first six episodes of The Expanse, a space opera series. It has some of the best world building I've seen in a while, helpfully established by a plot that covers a lot of ground in that world.

There are three main storylines so far--the desperately running former crew of a freighter called the Canterbury, a detective story starring Thomas Jane on a space station, and a political intrigue centred on a politician played by Shohreh Aghdashloo. 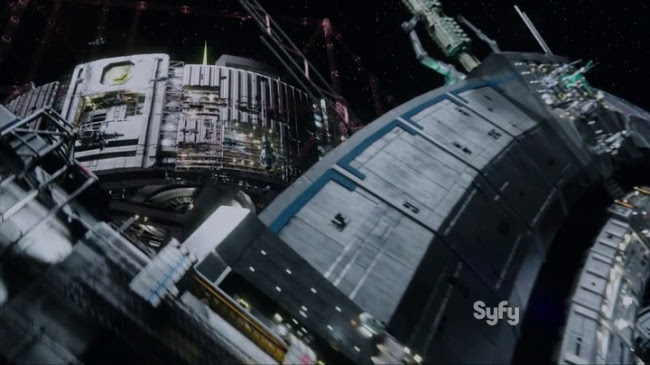 It's a couple centuries into the future and there's a human civilisation on Mars with which the government of Earth is locked in a cold war. The detective played by Thomas Jane, Miller, is investigating the disappearance of a rich girl (another plot kicked off by a possible dead beautiful woman) who is somehow tied into a plot to put Mars and Earth at war with each other. By odd coincidence, the plot bears similarities to the Doctor Who serial Frontier in Space which I've been watching again recently. But this is why David Bowie called originality an overrated virtue. The Expanse is quite engaging for its characters and the feeling it creates of this complex solar system. It's nice seeing a show bold facedly creating sub cultures and I liked that the "belters", people who grew up in the asteroid belt, are no longer able to survive in Earth's gravity. 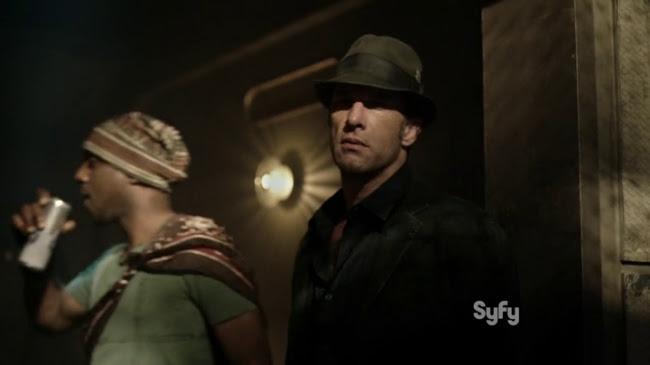 Really sleepy to-day. Just as I was planning on adjusting my sleeping schedule for the later classes I'm taking this semester, there was problems with water again in my apartment building which means workmen have been here all day beginning at 9:30am dismantling my shower. I'm definitely moving soon--I'm paying more for this studio apartment than many two bedroom places in town. Right now it's looking like I'll be getting a place with my friend Tim, I'm going to check out places to-morrow, hopefully I can get this all sorted quickly.

This morning I read the new story in Sirenia Digest, the first new story for the Digest in a while, and "EURYDICE EDUCTION" is a welcome return to form. Caitlin R. Kiernan takes the story of Eurydice and the concept of Orpheus instructed not to look back at her and uses it as a way to discuss the contrast between the mind trying to rationally organise the universe and the beauty of things unexplained. The compulsion to have questions definitely answered is met with the beauty and frustration of things being much bigger as the imagination is allowed to endlessly probe. Something many people to-day have lost touch with as the curtain is drawn back on just about everything and many people consider it standard to read all the spoilers for a TV show or movie they haven't watched yet, trailers now tend to give away whole movies.

One of the many interviews I've seen going around now with David Bowie is one from 1999 where an incredulous interviewer scoffs as David Bowie confidently predicting almost exactly what the internet is to-day. Bowie also talks about how it's probably a good thing that the internet will take the mystery away from icons, that the model of the 60s with Hendrix or the Beatles at the centre of a following will no longer work as the audience becomes more part of the artwork. Ironically, Bowie himself proves that the old model isn't dead with the posthumous success of ★. Indeed, it's the unreachability of someone who's dead--moreso with Bowie who successfully kept a private life--that I think is fuelling much of the attention he and the album are receiving now.

I certainly can't stop listening to and thinking about ★. Lately I've been thinking about the line "Ain't that just like me," from "Lazarus", referring at first to dropping his cell phone. It reminds me of the line "Isn't it me . . . putting pain in a stranger," from "Sweet Thing" on Diamond Dogs. This desperate attempt to grab onto identity, the consummately familiar and intimate thing, the absence of which seems a sure sign of death. This is the other side of "Changes", not only the song but of course how that song is emblematic of Bowie's entire career. If someone changes all the time, then who is that person? Is that person still the same person, what happened to the person who was here before?

I love the Lovecraftian feel to the ★ video. I don't recall Bowie ever mentioning Lovecraft, I wonder how much of the video was his ideas or the director's. But the bejewelled skull found by alien women is certainly an eloquent image of the human endeavour to make beauty and spiritual meaning out of something that is likely entirely physical. The fact that it's in a space suit on an alien world also conveys the desperate fragility of human technological achievement. The album's focus on women is also served by this. The anxiety about women and his feelings about women fit with the contemplation of the beautiful, strange, familiar, intimate, and separate. The women in the video have tails and seem to live in an alien realm, reminding me of Lovecraft's Ulthar. But their shaking ceremony oddly humanises them. "On the day of execution only women kneel and smile," Bowie sings. Do they kneel in prayer for the condemned or for the headsman's axe? Unlike Bowie's "Wild Eyed Boy from Freecloud" the women are at peace with the fate, or in some way accept it, a concept alien and seductive to Bowie.

Looking over some of my older entries on David Bowie, I see I wrote this about his song "Where Are We Know" from his penultimate studio album The Next Day:

"Where Are We Now", the title of the song, emphasises that there's a sense that sooner or later one gets to the point where one realises moving house or reinventing oneself will never satisfy the need that prompted those actions in the first place and there's an insubstantial, alien reality we're always stuck with.