The Spaceship Knows which Way to Go 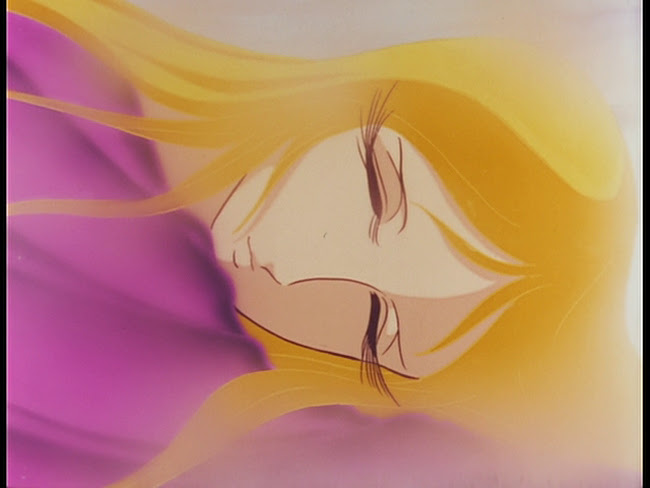 How many great movies and television series begin with the mystery around a beautiful dead woman? Laura and Twin Peaks come to mind. One could easily interpret it as a male writer treating the subject of distance between men and women, the desire for intimacy with a being who is different in obvious ways and in ways a young person can't understand. The classic 1974 anime series Space Battleship Yamato couples this psychological compulsion and anxiety with Japan's problem with patriotism in the post World War II era. The result is a fascinatingly beautiful, unfiltered transcription of human fantasy. And I'm only three episodes in.

The story begins with two young men discovering a crashed alien spacecraft on Mars and a beautiful dead woman bearing a message from the distant planet Iscandar. 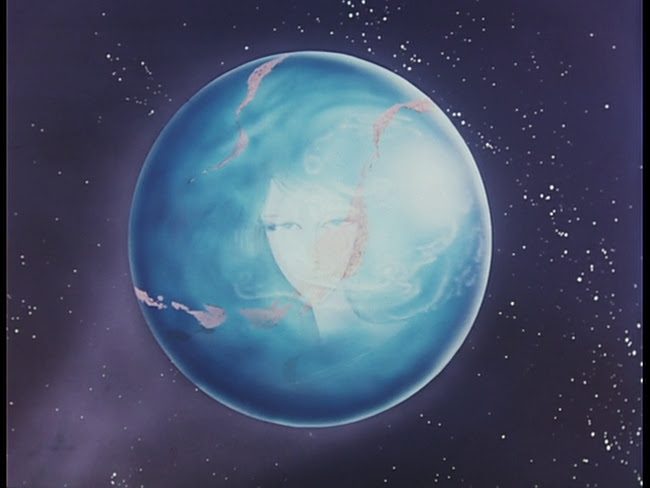 It is an offer of safe haven for the human race which faces the simultaneous threats of a decaying planet Earth and obliteration by an alien military force called the Gamilas. The hope for mankind has two focal points: the planet Iscandar and the Battleship Yamato. 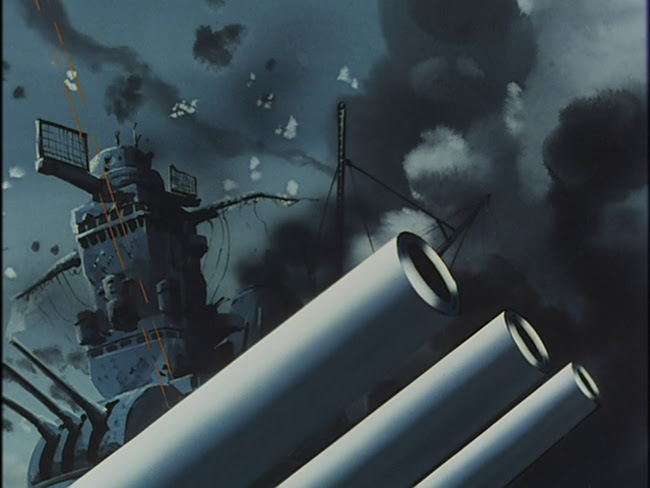 The same two young male protagonists also discover the decaying hulk of the famous World War II battleship. It's rebuilt in secret underground as a spacecraft bearing some structural similarities but outfitted now with the faster than light travel technology found with the dead woman on the Iscandar craft. The two men become crew members and their captain is the gruff and mysterious Juzo Okita. 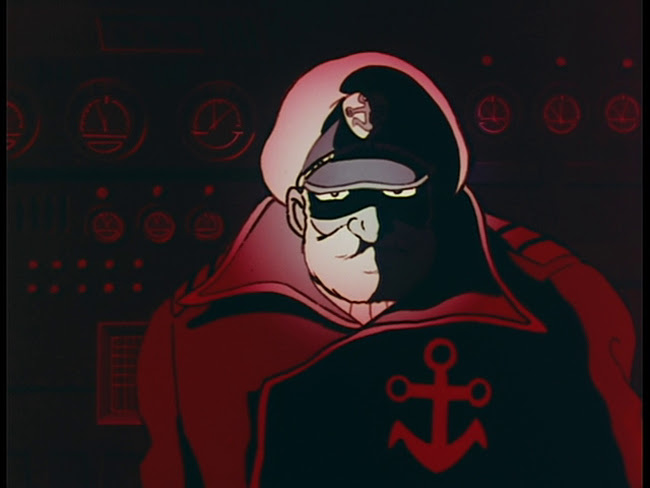 You have a father figure with the captain and a mother figure in Iscandar and bringing the two together, against all odds, is the only hope for humanity. But of course the mother figure is confused with sexual attraction. The men meet a beautiful nurse who ends up joining them on the Yamato who is there to warmly congratulate them on their first successful battle. She is a sort of mother as well but we're also made aware of her as a sexual being--not by the men but by a weirdly licentious robot. 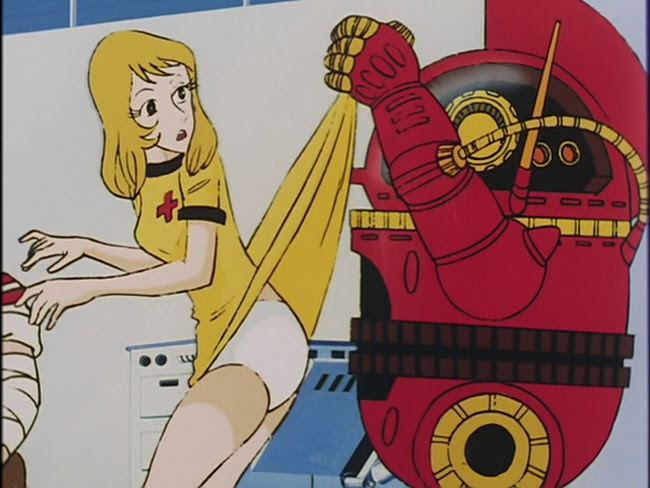 Who programmed this robot to lift women's skirts and grope their breasts? It's not explained but these things are on the show in place of any show of sexual attraction on the part of the men (so far). The desire to revere women and keep them distant seems only capable of coexisting with lust if the lust is transferred to a robot whose actions based on that lust preclude emotional intimacy. 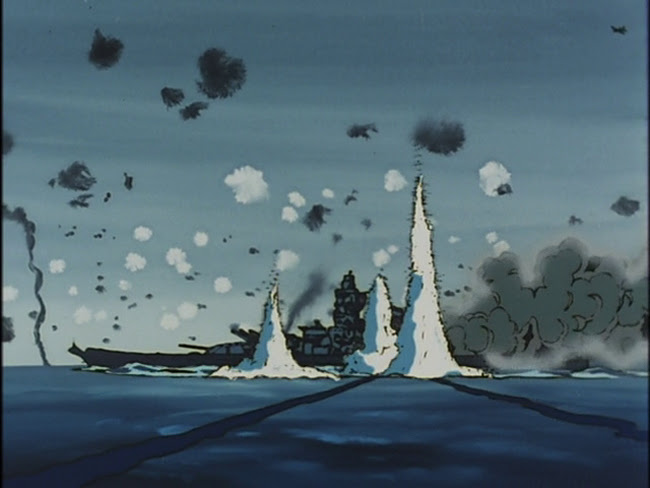 We also have some really beautifully animated sequences depicting the historical Yamato. Those who've followed the nature of Japan's national pride in films of the previous three decades will find this stuff really fascinating. From the strong pride in the emperor depicted in propaganda films like Kurosawa's The Most Beautiful, post-War films in Japan, incidentally some of the greatest films ever made, are permeated by a sense of floundering identity and guilt as ideals of democracy imposed by American occupiers coexist with the sudden and total loss of a national spirit of devotion to a common cause, in films as diverse as Naruse's Floating Clouds and Suzuki's Gate of Flesh. So the resurrection of the Yamato and attaching hope to it has an incredible thematic resonance, it's no wonder the show was so beloved. 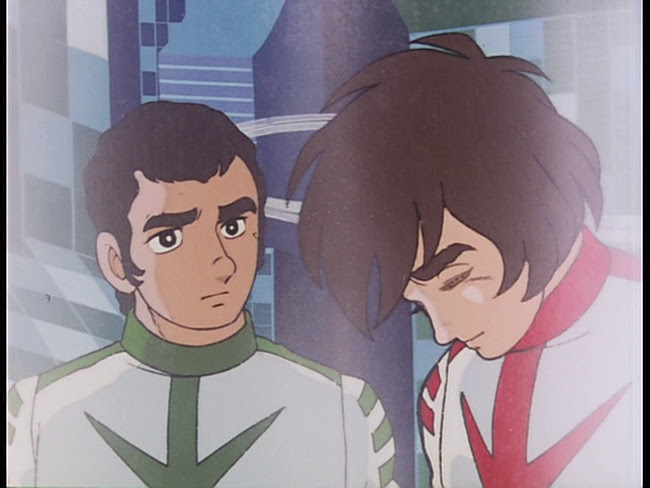 The series was released in the U.S. as Star Blazers in 1979 and can you guess which two aspects were edited out? All references to World War II and all the robot's sexual misconduct. In other words, two of the most significant psychological aspects of the show.

It's a shame because, like so many great, old anime series, one of the best things about Space Battleship Yamato is the feeling that this stuff didn't pass through some moral committee. Whether or not we approve of the show's attitude toward World War II or sex it's very honest. It's how good art is supposed to work. Director Leiji Matsumoto and writer Yoshinobu Nishizaki put themselves into it without prescriptively analysing themselves and that visible heart is complex and beautiful.

Economy dumplings redeem tickets.
At every branch of meal you get gingham.
Now sinking in pudding are bad wickets.
Accuse the night's nostril in old Arkham.
Amoeba shops were once but one retail.
A Sith's own bobble head beheld the mall.
Religious cards are packed for quick resale.
A pocket pen can try to take a call.
A secret cellophane profaned the pope.
Leftover snow reformed the depths of coal.
Amphibians give tips on how to cope.
A piece of cake is harder than the whole.
The oldest ship of long defeat emerged.
Strange hope and far distant planets converged.

Posted by Setsuled at 2:48 PM
Email ThisBlogThis!Share to TwitterShare to FacebookShare to Pinterest