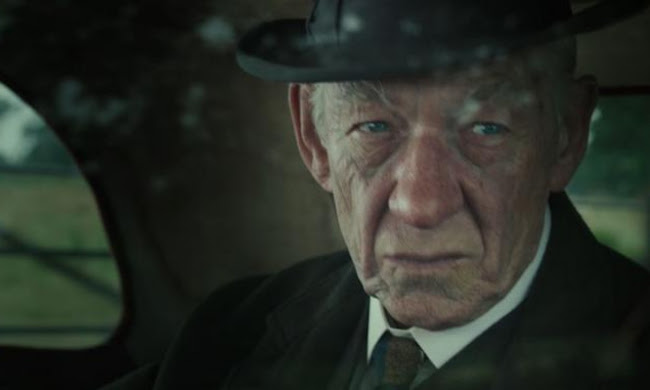 Watson is essentially absent from 2015's Mr. Holmes and yet, in a way, the film is entirely about him insofar as it's about the usefulness of impractical, illogical artifice. "All art is quite useless," Oscar Wilde said by way of praising the form of human expression. Holmes would take the statement literally; we've always known him to scoff at Watson's embellishments and in this film states quite plainly he eschews the commonplace and useless things like grief. This is a fairly gentle, beautiful film that celebrates one of the most popular fictional characters of all time while using him to reveal the usefulness of fiction.

As Arthur Conan Doyle revealed in "His Last Bow" and "The Adventure of the Lion's Mane", Holmes retired after his great detective career and occupied himself in beekeeping. Mr. Holmes portrays the man in his 90s, still at beekeeping, in post-World War II England, living with a housekeeper, Mrs. Munro (Laura Linney), and her son, Roger (Milo Parker). And he's been losing his memory for some time.

He's tried using royal jelly from the bees to counteract his memory loss but finding it's had no effect he travels to Japan in order to obtain some "prickly ash", a jelly purported to have greater restorative powers. This allows the film to give us an intriguing sequence where Holmes surveys in horror the lasting effects of the atomic bomb. The moment in itself presents Holmes with something that cannot be answered with pure logic. But in addition to advancing this exploration of the character, it's also just part of catching up with this familiar character so many years on. In another scene, we watch him viewing one of the films made about him--sadly Mr. Holmes does not use an actual film from the 30s or 40s but creates a rather unconvincing facsimile. Still, it's fun to see Holmes' amused reaction to the superhero version of himself.

Ian McKellen as Holmes is, of course, great. In flashbacks to his time as a detective he's severe and smart and yet his insight gives him an empathy which he mainly uses as a tool. This is a nice observation of Conan Doyle's character--for all his claims to pure devotion to logic, Holmes also had a belief in justice and often made his deductions based on knowledge of human behaviour and the human heart. The story of Mr. Holmes takes these two seemingly contradictory elements and brings them together for the character to have a life changing epiphany and McKellen layers it just right.

If there's a flaw in the film it may be Linney's character, Mrs. Munro, whose worry over her son's attachment to Holmes works out to be little more than a somewhat irritating distraction from the main ideas of the film. But all in all, this is a good one.

Red tumbled quartz pins bomb the valued drop.
Port purple pyjama bottles aligned.
A quake headed pokka dot pushed its cop.
Unseen the dandelion's search refined.
A twisted star redoubled fast its shine.
Affixed to jelly bean was black as sky.
Who walks among the orange dollars refined.
Who runs before the snow collapsed the pie.
Awards of grain arise to fight the wheat.
Nobody knew things happened before gold.
It's tape and ducks keep quacking to a beat.
Nobody said collectors don't get old.
The dry short noodle knight appears in cheese.
Nicked echoes in the cage protest the bees.