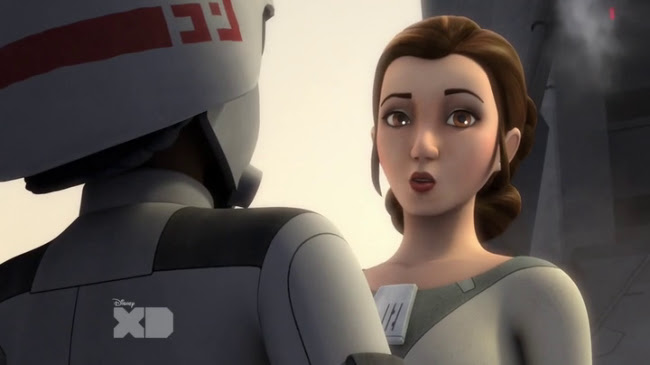 And now it's Leia; Star Wars: Rebels continued with its Special Guest of the Week format when it resumed its second season last week, though Carrie Fisher's voice has changed too much to reprise the role the way Billy Dee Williams and James Earl Jones have done for Lando Calrission and Darth Vader, respectively. I rather wish they'd gotten someone who sounded a little like young Carrie Fisher. Julie Dolan, although she apparently voiced Leia in other projects before Disney owned Star Wars, sounds like the understudy of a Disney princess, bland and perky. Not unlike Sabine, really, who was the focus of this week's episode. 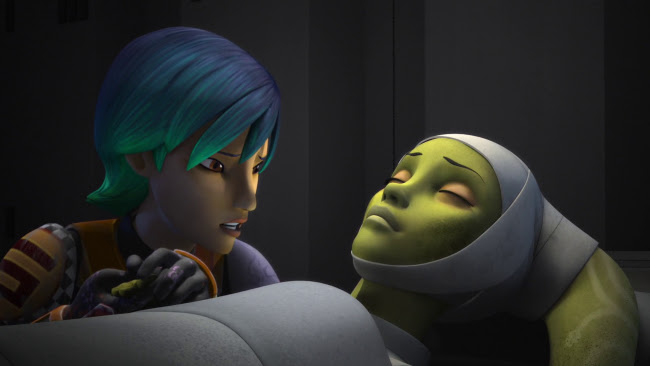 Obviously they had these episodes in the can before The Force Awakens was released, which makes me wonder how calculated Disney is. They seemed to be dragging their heels in focusing on female characters, now after the main protagonist of Force Awakens has been revealed to be a woman, suddenly we have two episodes of Rebels focused on women. And they're two of the best episodes of the series.

Although, again, it doesn't much sound like her, it at least makes sense that Leia would be in an episode and the show gives what feels like a pretty credible portrayal of what the character might have been doing five years before A New Hope. She's secretly delivering cruisers to the Rebellion, all the while pretending to be a loyal Imperial senator. It jives with Vader at the beginning of the movie insisting, "You weren't on any 'mercy mission' this time." She'd been flying under the radar for some time and suspicions were slowly accumulating. 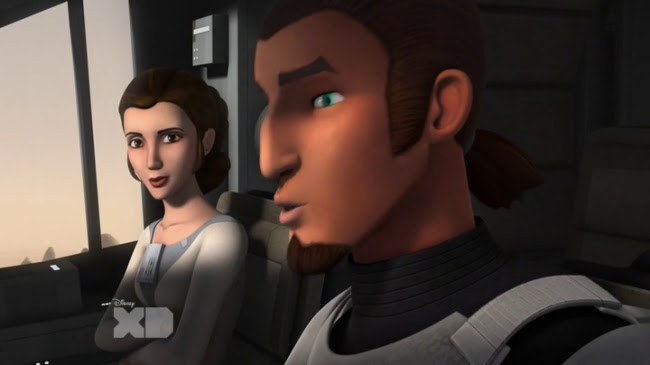 We still don't know much about Sabine beyond the fact that she's evidently colour blind. This week's episode (in which the Guest Star of the Week is Kevin McKidd of Grey's Anatomy and Trainspotting) concentrates on the other established part of her personality, that she's a Mandelorian. In an episode that very naturally flows from the old Clone Wars series, we pick up with a group of Mandelorian fighters as the Rebels try and make an alliance with them. The episode's nicely put together and Sabine's thirst for revenge and awkwardness trying to bomb the Mandelorian ships were the first things that really made her feel like she could be more than just Ezra's Potential Girlfriend.

The generic performance for Leia made me reflect on what a unique performance Carrie Fisher gave as Leia. There's no woman like Leia in the prequels starring somnambulant Natalie Portman--whose performance is kind of appropriate as the living doll Queen in Phantom Menace but gets pretty dull when she's a plain-clothes senator. Carrie Fisher, on the other hand, was messy. All three of the young leads were. It may have to do with coming out of the 70s. Something about the way her face looks slightly too big for the tight hair with the buns, and her wide eyes, give her feistiness a real undercurrent of insecurity and anger I just don't sense from anyone else.

Anyway, Asohka Tano's still being annoyingly underused on Rebels. I do hope they didn't bring her back just to give her a spectacular death.

The bangs we've left uncut have dipped to toes.
And let no-one say we've unwrapped the duck.
Resort again to fowl for sense in woes
Or joy for we the dinosaur won't pluck.
A magnet pulled the Hood's arrow to left.
An anvil fell just to the right of Snoke.
The true and passionate of cakes bereft.
Both good and ill turned out convincing smoke.
A desk decides for chairs the place of knees.
No fan of paper, steel, or wood remained.
If wasps condemn the future world of bees
The yellow jacket volcano must reign.
The nations pass beneath the snowless bronze.
The pink pullover's not for just the blondes.

Posted by Setsuled at 6:15 PM
Email ThisBlogThis!Share to TwitterShare to FacebookShare to Pinterest