I guess the fact that I start school to-morrow explains the rather broad metaphor of the dream I had last night; I went to school to find that everyone had been turned into vampires. The vampires came in two varieties; mindless zombies and intelligent evil. It was totally random which kind of vampire you turned into--there were also two ways you could be turned, either by getting bitten or by sitting in some kind vampirising mechanical chair. When I was caught, I was taken to one of these, but before I got strapped in I asked the guy in charge if I could use the bathroom first.

"I gotta take a shit, man," I said. I know people void their bowls when getting executed and I thought something like that might happen in the chair. I didn't want to have an accident in front of the vampires.

So he gave me directions to the restroom and I started off through the halls. I passed one of the zombie vampires and it occurred to me that there's no reason the other vampires in the offices knew I had permission to use the restroom.

But honestly, I'm looking forward to school. Sort of. Well, I love microcosms. That's why I love shopping malls. Now I have an excuse to hang out in just such a microcosm two days a week. 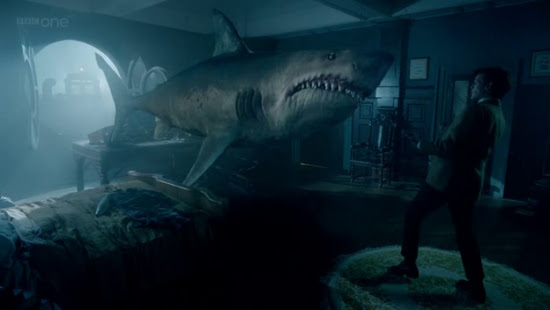 Last night I watched the 2010 Doctor Who Christmas special, "A Christmas Carol". It skated on the edge of too twee for me, but it made the crossover into being genuinely effective. I loved the fish swimming in fog, the beautiful woman charming the shark with her song.

I kind of wish there were some explanation as to why it no longer causes an explosion or some other kind of catastrophe when someone comes into physical contact with themselves from another point on their timeline. That was a rule used as a major plot point as recently as Eccleston's era, established, I think, in the fifth Doctor's Mawdryn Undead.

But Steven Moffat has a knack for writing stories where people meet themselves. I also enjoyed the two three minute miniature episodes, "Space" and "Time", which the BBC currently has on YouTube;

Posted by Setsuled at 3:27 PM
Email ThisBlogThis!Share to TwitterShare to FacebookShare to Pinterest