I dreamt last night I lived in some kind of dark, brick complex with a small entrance between video game arcades leading back to the larger space, which was a collection of rooms. Sort of like a base in Antarctica. I think it was closer to how I always imagined the Ninja Turtles' home in the sewers. Living with me was Tegan and Nyssa, companions to the fifth Doctor on Doctor Who, and Kurt Cobain. Cobain had a recording studio there and I heard him recording a new song, adding extra "y" sounds to words like Courtney Love tends to do. Tegan and Nyssa were upset with me because I kept bringing hemp milk home but I explained to them that there was a lake of hemp milk to the south, so I was getting it for free, which calmed them down.

Then Tegan was trying to tell me something really important but I accidentally accepted a teleport from a bot Amee had sending out automated notices and teleports for her business. I arrived in a bazaar of brightly coloured tents and Amee was with five other women, all dressed in saris, chasing a man in a bear costume. Since she didn't seem to have time to talk, I went back to the compound and found Tegan in Nyssa's room where Nyssa was playing video games on a console system. Tegan still seemed worried but no longer interested in talking about it.

Maybe the weird dream is to do with all the wine I had yesterday--my parents have been watching a series of DVDs on wine making and wine tasting and yesterday they invited my sister and me to join them. They'd gotten the four wines discussed in the chapter we were going to watch, two whites and two reds, so we could taste along with the host, Jennifer Simonetti-Bryan. Does she look crazy to you? 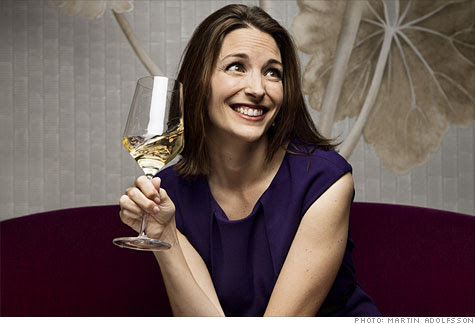 My sister thought she looked like Jennifer Carol Wilbanks, a.k.a. the "Runaway Bride", the woman who ditched her wedding with an abduction hoax a few years ago. 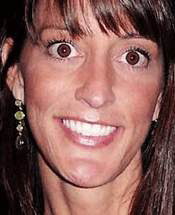 I guess it's those wide open eyes, which Simonetti-Bryan had pretty constantly throughout the video. My mother, like probably a lot of people, doesn't quite get the "we mock because we love" concept. The more wine we all drank, the more tickled my sister and I became with Simonetti-Bryan and the somewhat hokey production values of the video and the less our mother was willing to take it in stride. I kept saying, "No, I really like her. I think she's great." And I meant it, but I couldn't stop it from sounding insincere. "I just think she's fierce," I said, which didn't help. Then I started digging a Lars von Trier press conference style hole for myself, "I think I could save her. I think she just needs to be held."

Oh, well. My mother brought up the fact that Simonetti-Bryan is well educated and makes a lot of money as though that somehow disqualified the impression my sister and I had. But that was part of her charm as far as I was concerned--she seems really into what she does, and that she seems a little awkward, kind of emotionally fragile . . . I don't know, it's cute. I feel weirdly like a pig for feeling that way, but I do, I just can't help it.