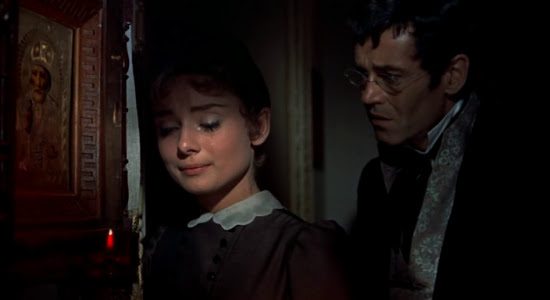 King Vidor's 1956 adaptation of War and Peace is amazing in a lot of ways, and might have been a great film if it had had a different director. He's the one I blame for the movie not only exhibiting a lack of understanding for the material but in some cases expressing a philosophy exactly opposite of that which Tolstoy was writing from.

A crucial element in the book is the lack of real control Napoleon, Kutuzov, and the people nominally in charge of the involved nations actually had over the battles that took place in the war. The 1956 movie instead gives insights Tolstoy had into the war and puts them into the mouths of Napoleon and Kutuzov, both men clearly being portrayed as the powerful forces that were solely responsible for deciding things. One of the aspects of the book that supported Tolstoy's argument, and one of the most viscerally effective aspects of the book, impressions of the conflict from the perspectives of the common soldier, are entirely omitted, and the most prominent character of those sections, Nickolai Rostov, is reduced to a very minor role, which is a pity because he's played rather well by Jeremy Brett.

I'm not sure knowing the book made the movie easier or harder to follow, as characters are assigned different bits of dialogue and functions within the plot. Boris is totally absent and Natasha is shown to have interest in Pierre from the beginning--of course the characters don't age as much as they do in the book, which creates problems especially in regard to Natasha about whom there's still dialogue about how much she's grown up since the first part of the movie. The drama between Nickolai, Maria, and Sonya still apparently exists and is referred to off hand by other characters, which makes it feel even stranger that we don't actually get to see any scenes dedicated to them. 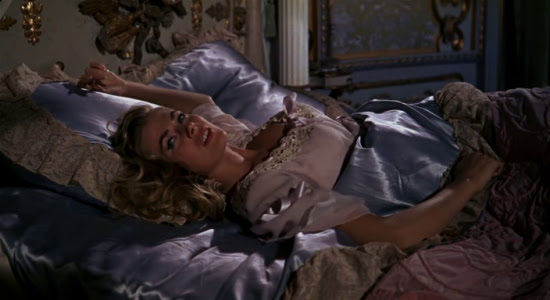 Yet, the film isn't without its good points. Audrey Hepburn as Natasha is perfect casting, and Anita Ekberg is lovely as Helene, though another part of the problem with the movie is that people who are portrayed by Tolstoy as simply not having the nobility of character displayed by Andrei, Pierre, or Natasha are portrayed as outright villains, which is particularly frustrating in the case of Lise and sabotages the impact of much of the story. Henry Fonda was a great actor of greater range than most people might think--compare his roles in The Lady Eve and Once Upon a Time in the West--but he's not convincing as an aristocrat. 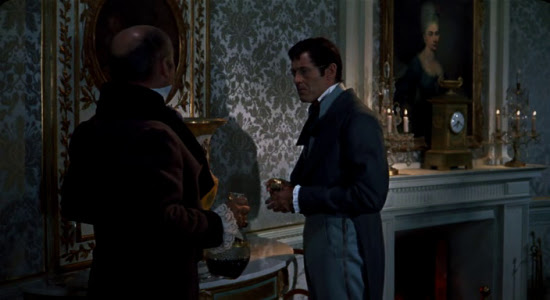 It is a beautiful film. Shot by Jack Cardiff, it has a wonderful complexity of tone not usually associated with Technicolor films of the 1950s. His indoor scenes are filled with his usual Rembrandt shadows and contrasts of cool and warm colours that are both striking and subtle. 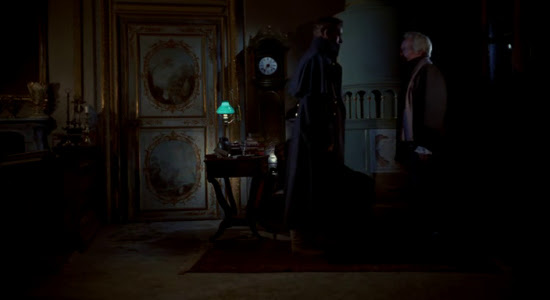 I noticed that for scenes dealing with God in some way, Cardiff used very strong red light, for churches and death beds, as in this scene with a very striking slash of red across the floor; 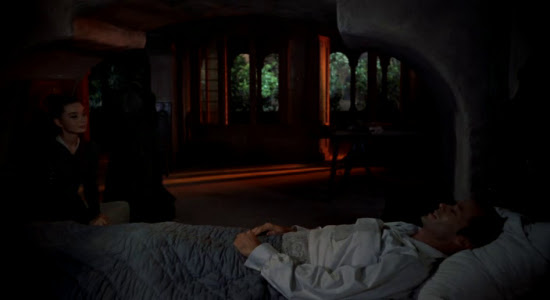 His outdoor shots are often gorgeous, too. Although I rued the absence of Tolstoy's soldiers' perspectives, the sort of bird's eye view of the battlefields often look like paintings. 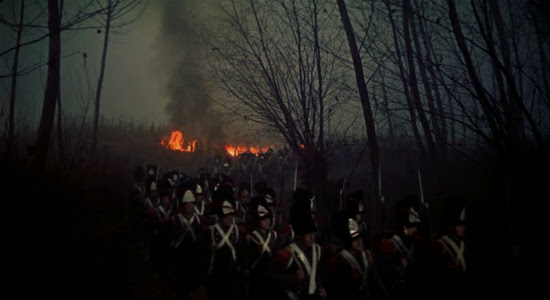 A scene of Pierre walking from one view of battle through proscenium trees to another is both amazing for its visual beauty and for the coordination of so many extras. 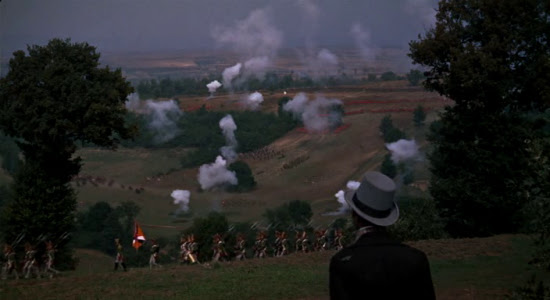 And speaking of which, I was astonished by a scene of the French cavalry galloping through retreating infantry;

I'm guessing horses were hurt in the making of this film. They sure don't make 'em like that any more.

The camera angle probably conceals the careful rows in which the infantry is probably arranged, but it's still a damned impressive piece of choreography.

When indoor sets are used for outdoor scenes, Cardiff's photography is still amazing. The scenes don't look like they're actually outside, of course, but they're excellent examples of beautiful artificiality. My favourite was the sun through haze causing the snow to glitter during the duel between Pierre and Dolokhov. 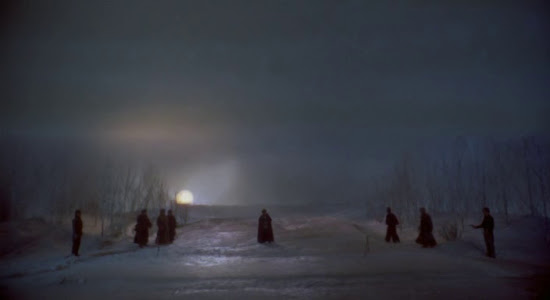 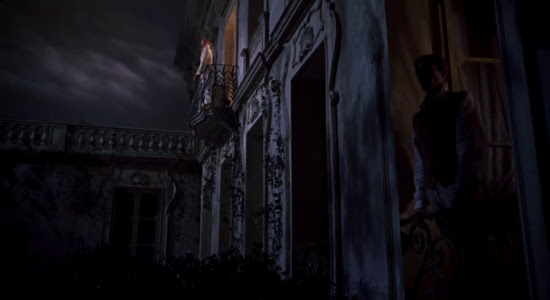 I was a bit disappointed by the costumes at first. I realised this may be reflective of the different impressions of beauty by the English costume designers I'm used to seeing in Jack Cardiff shot films--a plain yellow dress worn by Hepburn at the beginning of the film was terribly boring and this outfit worn by Maria may be one of the most hideous costumes I've ever seen; 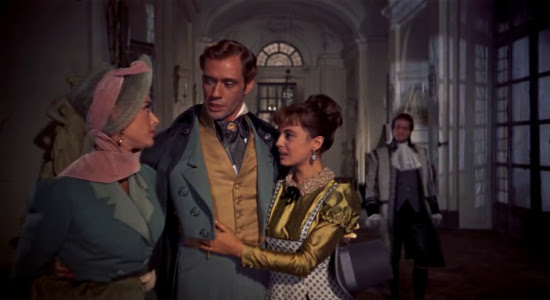 I almost wonder, since IMDb lists two costume designers, mentioning that one was uncredited, if the film's initial costume designer was fired and replaced because later the costumes become absolutely gorgeous. Dig Maria now; 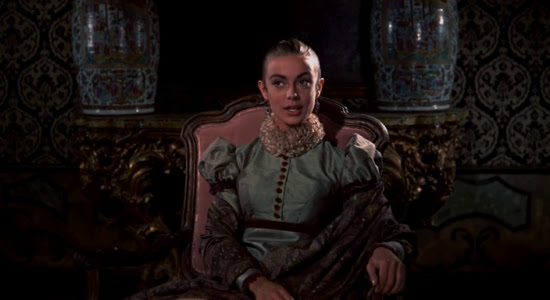 I love that wrap. From behind; 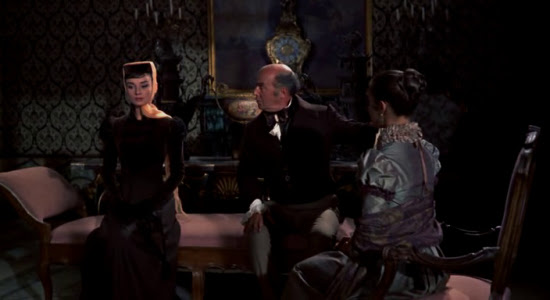 And I loved the use of flowers on the dresses Sonya and Helene wore to the opera, and Natasha's grey with gold is also lovely; 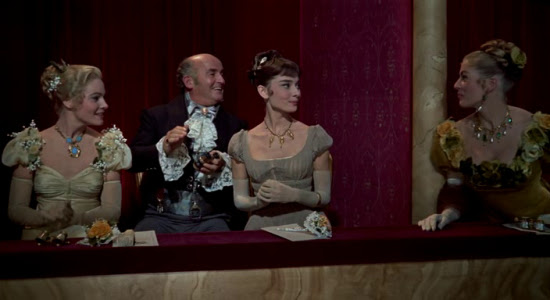