Time and the Right Version 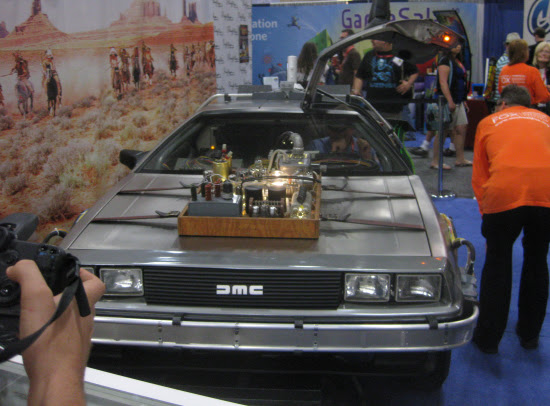 One of the many pictures I didn't post from Comic-Con--this is the DeLorean from Back to the Future Part III. Yesterday I actually saw a DeLorean on the street, exactly the same kind that was used for the Back to the Future movies, only it didn't have the time travel stuff in the back. It's an oddly flat car.

I actually meant to talk about the DeLorean at Comic-Con because it was accompanied by Claudia Wells, who played Marty's girlfriend Jennifer in the first film; 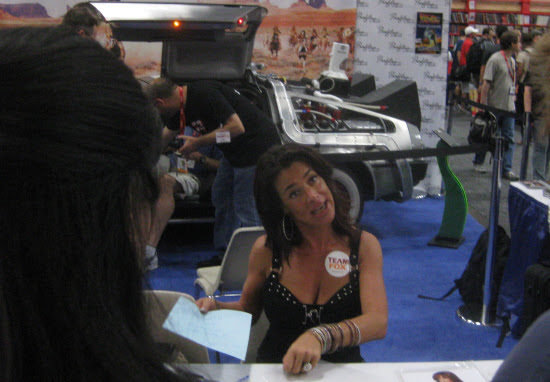 She was replaced in the second and third films by Elizabeth Shue, and I remember when I was a kid pointing out to an adult, I don't remember who, that it was a different person and I was told I was wrong. Elizabeth Shue looks enough like Claudia Wells that I could doubt myself, which made the subtle differences in their features and mannerisms sort of disturbing. There was kind of an uncanny valley quality, except with real people.

I tried watching The Big Boss, a.k.a. Fists of Fury last night, the 1971 Bruce Lee film. I was enjoying it until I recognised "Time" by Pink Floyd on the soundtrack--from the album Dark Side of the Moon released in 1973. And I realised either Pink Floyd ripped of a Chinese film composer or I wasn't seeing the original version of the film.

So I checked Wikipedia and found out that I was indeed seeing a version rescored in 1983, not only nicking Pink Floyd but King Crimson as well. I couldn't continue watching after this--which was pretty annoying as I was already halfway through. It doesn't look like Bruce Lee's films have ever been released in particularly good DVDs and it sounds to me like some motherfuckers are cynically exploiting the popularity of these films.

This morning I read "THE GRANTING CABINET", a new story in the latest Sirenia Digest, which read more as an interesting discussion of how the mind processes fiction. Alongside Caitlin's recent blasting of the "trigger" phenomenon in her blog, she seems to be focusing on the often unrecognised fundamental effects fiction has on the mind. It sort of reminds me of Pierrot le Fou, and makes me contemplate a literary version of the French New Wave in film.