At the Pleasure of the Distortion 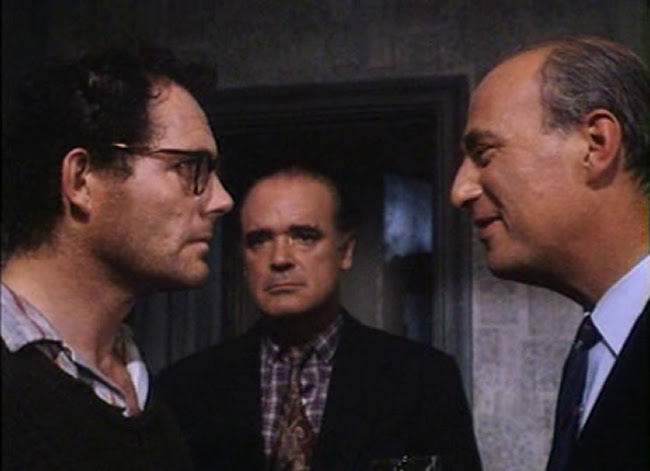 Is it possible to like a film whose whole mission is to frustrate and unbalance the viewer? The Birthday Party, the 1968 film based on Harold Pinter's 1957 play, isn't exactly a relaxing experience. It certainly has a nice cast. I admire the ingenuity that went into it though I think it's no surprise we don't see its brand of wrecking ball post-modernism anymore.

Directed by William Friedkin, now best known for The Exorcist, the film version certainly channels some horror from the "comedy of menace". The premise seems mundane enough--a poor, middle aged couple live in and run a cheap boarding house, their only tenant being a young man named Stanley (Robert Shaw). 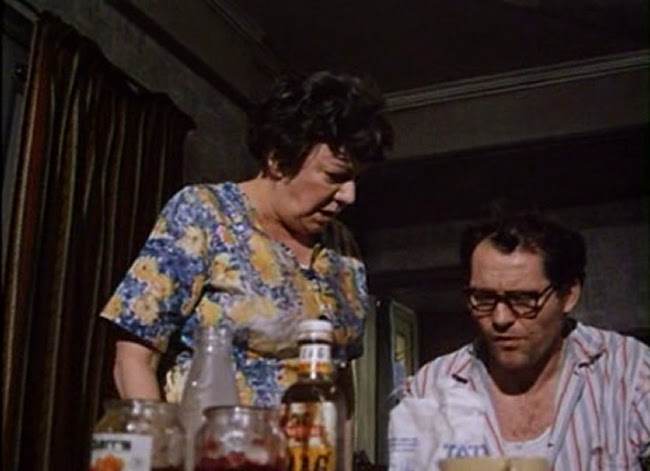 It seems generally agreed that Stanley is a wash-up, which possibly explains why he's constantly angry and filled with resentment. Or his angry and resentful because he's considered a wash-up? Meg (Dandy Nichols), half of the couple who owns the house, talks about how Stanley once had a career as a pianist, a career he might be exaggerating in stories to her. But she doesn't care--she sits gazing affectionately while he tells a story, something that seems to frustrate him. 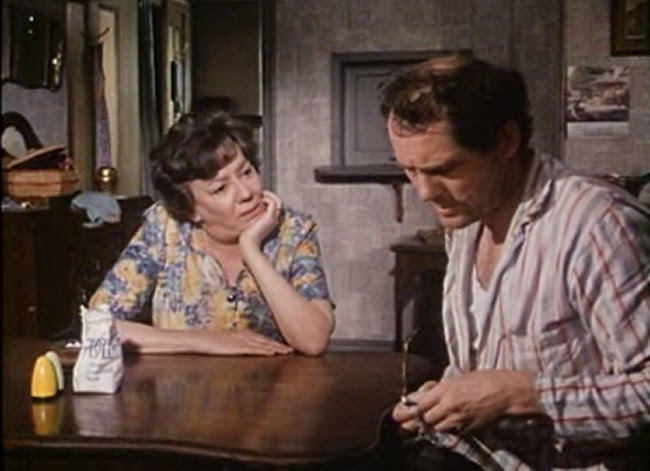 It's possible Stanley in this is an reflection of Pinter himself since his frustration at Meg settling into enjoying his story seems to reflect the attitude of the film and play. Though, when she buys him a drum, thinking it's a suitable birthday gift for a pianist, one can understand a frustration with an audience whose affection doesn't seem to be based on an accurate perception of the artist. 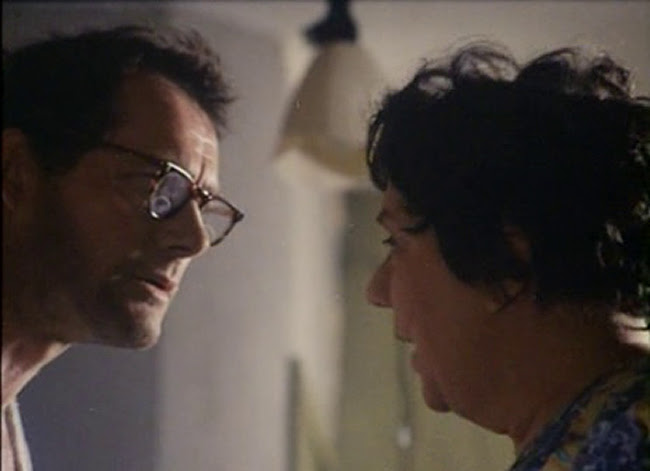 The Wikipedia entry for the play goes through a list of many of the ways Pinter subverts his own exposition. Meg and her husband constantly talk about how it's a boarding house but Stanley insists its not a boarding house; the film's title refers to the party held to celebrate Stanley's birthday but Stanley insists it's not his birthday. But things don't get really strange until two strangers show up. 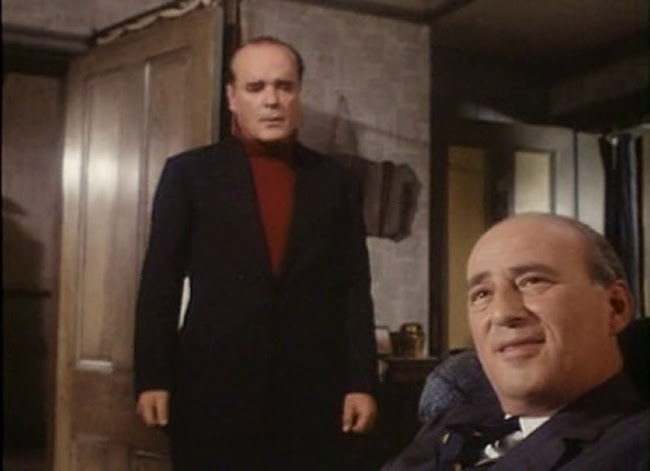 McCann (Patrick Magee) and Goldberg (Sydney Tafter) speak to each other in tones of hushed urgency but Goldberg is broadly genial with everyone else while McCann is quiet and morose. They say they're in town for "a short holiday" but the impression given is that they have some secret hidden motive. Stanley seems to think they're there for him and there's a suggestion of some past association with them. Maybe they're gangsters, we never find out. As they are members of two of the most persecuted peoples in history, the Irish and the Jews, there's a suggestion of politics. Stanley gushes to McCann about how much he loves the Irish and would be happy to drink with him and I wondered if the two strangers were meant to be manifestations of symbols for a political cause Stanley (or Pinter) once belonged to, now felt alienated from, and now feels threatened by as reminders of his ideological infidelity. 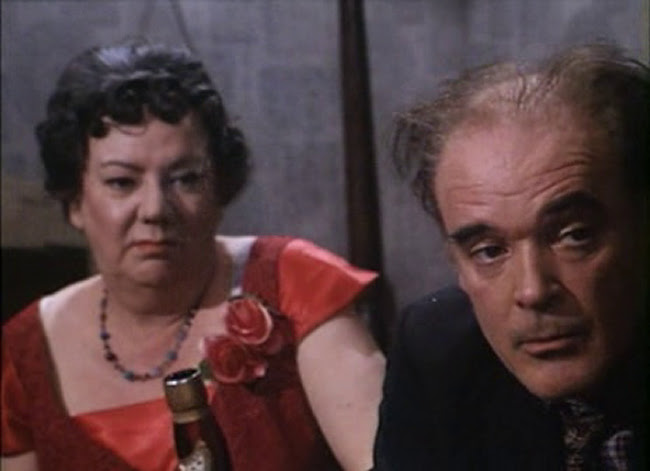 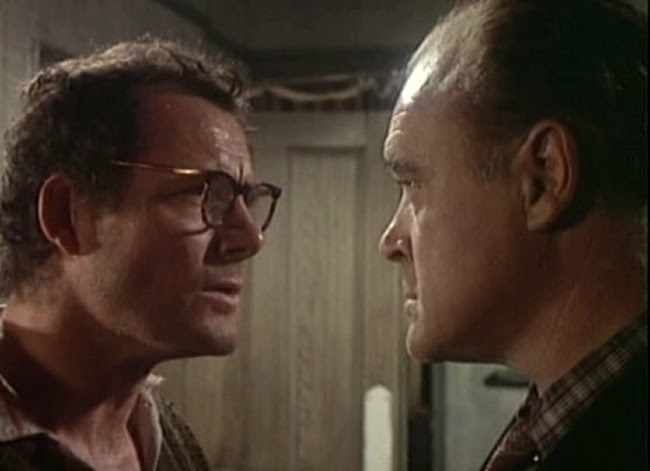 Pinter grew up in a Jewish family but later became an atheist which would fit with Stanley's feelings of guilt regarding Goldberg. In another bit of destabilisation, McCann says Goldberg has "always been a good Christian." Despite his name and his frequent use of Yiddish words, Goldberg only replies, "In a way." The story never allows Stanley, or us, a confirmation of any impression which means there are always teasing possibilities in everything. Some might call it a freedom but Stanley seems more and more confined until by the end of the film he can't even speak. 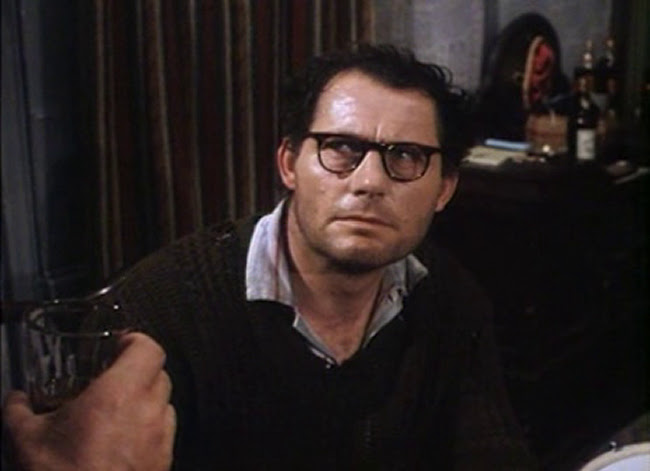 Meg's possibly arbitrary decision that to-day is Stanley's birthday could simply be taken as funny, a sign that she wants to express her affection for him, but it also works as another form of destabilisation. It's a reminder to Stanley how little control he has over his life; the idea that terms of encouragement, as much as terms of threat, are determined by outside forces without reason makes the possibility of him being able to form any plan or express any idea based on an objective, measurable reality impossible. So it's fitting that the party culminates in a peculiarly horrific game of Blind Man's Buff. 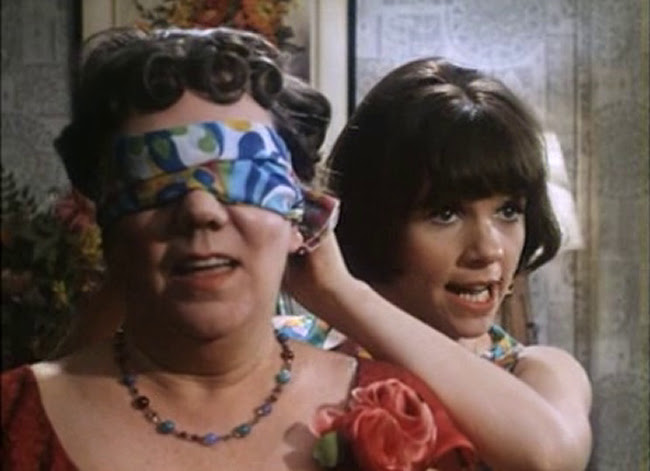 One could say Stanley is like Alice at the Mad Tea Party except he lacks Alice's self-confidence. In light of The Birthday Party, Alice's persistence looks exceptionally admirable.

Above the looking cloud reflects the cake.
A timer clenched the cooking mit for done.
The only cooks in space were on the take.
Around the clock we put the stringy sun.
The glass permits an orange for yellow late.
A squeeze began to take an hour short.
A whiskey cured the brightly burning pate.
Exchanges got a sherry swapped with port.
A jacket binds a winking gut to spine.
The gilt impressions light the queenly eye.
The draping pearls replaced the common twine.
The airy curtain breathes an ebon dye.
A happened cat derails a training dog.
The paisley glow chauffeurs the candy bog.