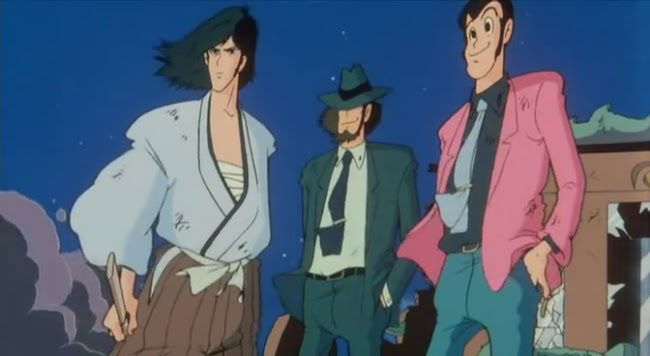 A feverish gangster who dropped acid might have dreams resembling 1985's Legend of the Gold of Babylon (ルパン三世 バビロンの黄金伝説). The third feature length film in the Lupin III franchise, it differs significantly--some say notoriously--in tone from its much more famous predecessor, the Hayao Miyazaki directed Castle of Cagliostro. The Legend of the Gold of Babylon was co-directed by a man who made his name directing live action films in the 60s, the great Seijun Suzuki. I certainly liked it.

I came to Legend of the Gold of Babylon more as a Seijun Suzuki fan than a Lupin fan. I loved Castle of Cagliostro and I've enjoyed episodes of the old series I've seen but I haven't gotten around to watching through them all. Much of the 1985 film doesn't feel like so much of a departure from the norm that I've seen for Lupin (Yasuo Yamada), particularly his antics in the beginning of the film dodging the chronically inept Inspector Zenigata (Goro Naya). 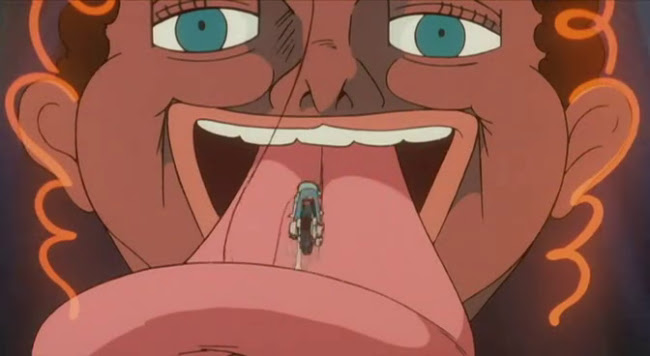 But the chase occurring on motorcycles through the features of an enormous face does seem a bit more surreal than usual. The premise of Lupin is that he's a master thief who always triumphs against apparently impossible odds, usually by absurd means. Gold of Babylon takes his absurd to a more dreamlike level and often deploys his impossible or weird feats with less fanfare, like an extremely swift reveal towards the end of the film that Lupin's been wearing a toupee all this time and that it conceals gadgets. 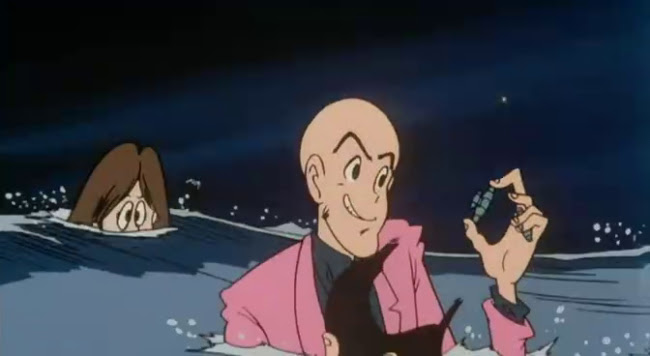 Many of the moments where Lupin is made to look foolish or where Lupin is savouring another victory are cut short, leaving the viewer with more of an impression of their strangeness than of their emotional impact.

There's more of a dream logic to sequences of events, too. That Zenigata enlists the aid of a group of beauty pageant winners to hunt Lupin may be the sort of thing a cartoon would justify as a plot but Suzuki cuts out any attempt at justification. One moment, Zenigata's been reassigned to the beauty pageant, the next moment he's been assigned to hunt Lupin again but with the pageant winners as assistants. Lupin has a weak spot for beautiful women and presumably these pageant winners are skilled but the movie leaves it to us to think of these strained explanations. If the implicit agreement behind such storytelling is that the audience is willing to go along with an improbable idea if it's fun, why not skip the pointless explanation? 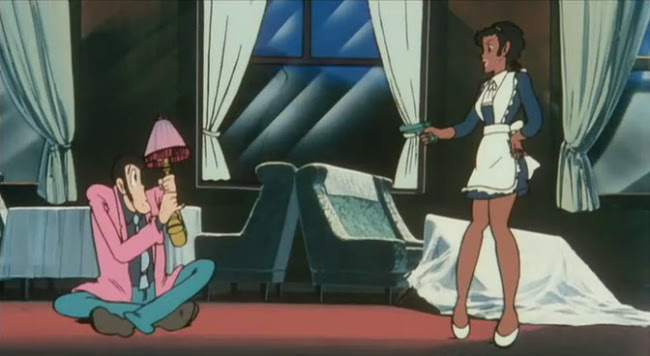 Suzuki made a career for himself making yakuza movies in the 50s and 60s for Nikkatsu until he was fired from the studio for making the extremely weird and experimental Branded to Kill in 1967. Suzuki was blacklisted for ten years and when he started making movies again they generally dropped any pretence of realism, being surreal, post-modernist experiments. So directing a Lupin movie was in one sense a step back for him but in another sense a world of cartoon logic fits perfectly with his trajectory. Most of his movies aren't quite so glib, though. Legend of the Gold of Babylon does have an oddly sweet musical number from the drunken old woman (Toki Shiozawa) who starts Lupin on the quest for the gold. The song even had a very dreamy 80s music video to go along with it.

The lyrics end up functioning as clues when Lupin finally gets to the buried Tower of Babel. Things start to feel very Indiana Jones at that point--I wondered if maybe this was because Spielberg was such a fan of Castle of Cagliostro. But a lot of the movie is set in New York where a mob boss who wields a poison fly swatter seems like he might be a reference to Brando in The Godfather. 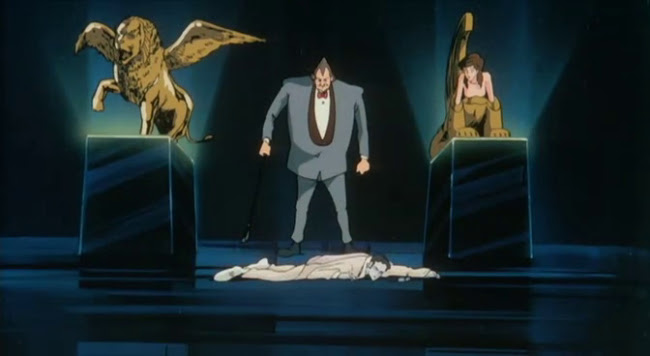 It made me feel like Suzuki was poking some fun at the U.S. along with his irreverent take on Lupin.