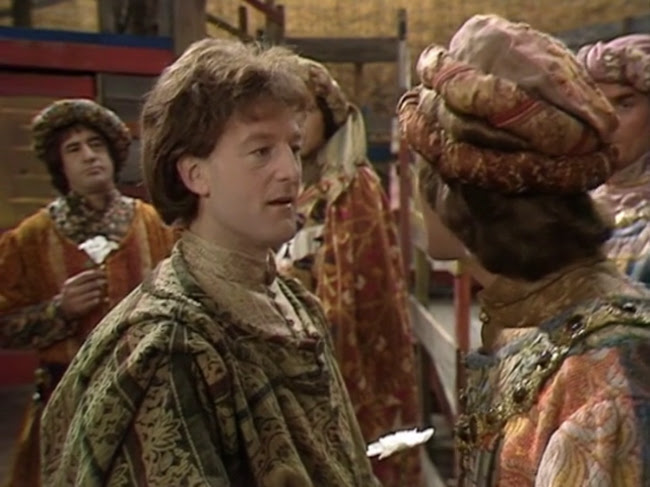 So speaks one of the parties in the origin story William Shakespeare imagined for the War of the Roses in his Henry VI: Part I. It's not considered one of Shakespeare's best plays--in fact, not considered altogether a Shakespeare play but widely believed to be a product of collaboration, possibly with Thomas Nashe and Christopher Marlowe--but there's plenty in it that rewards reading or, as I did last night, viewing a production. I watched a 1983 production directed by Jane Howell. It's significant that a woman directs the production as it is a play in which its handling of gender has been a topic of much analysis. It's one of the chief points of interest in it alongside a neat depiction of how superficial rivalries can lead to substantial harm. 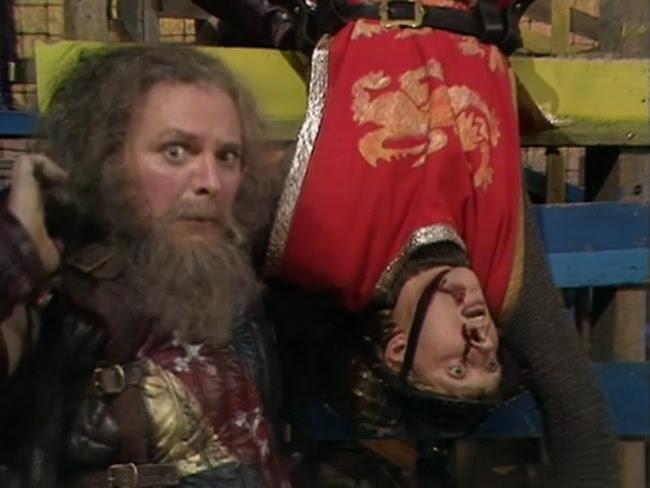 The play's also noteworthy as the earliest appearance of Sir John Falstaff, though he's generally not regarded as being the same character as the one who first appears in Henry IV: Part I. The Falstaff who appears in the Henry IV plays, and later in The Merry Wives of Windsor, is generally considered one of Shakespeare's greatest creations--some have said his greatest--while the man of the same name who figures into Henry VI has only a couple brief, undistinguished scenes. And, of course, chronologically the Falstaff of Henry IV would be dead by the time of Henry VI, though I would say this is no argument since The Merry Wives of Windsor is apparently set in Shakespeare's time. Falstaff does not seem a man bound by temporal physics, so I say one might as well regard the one in Henry VI as one and the same. Jane Howell evidently was of the same opinion because, like the Falstaff of the more famous plays, her Henry VI Falstaff is fat and has a big beard. 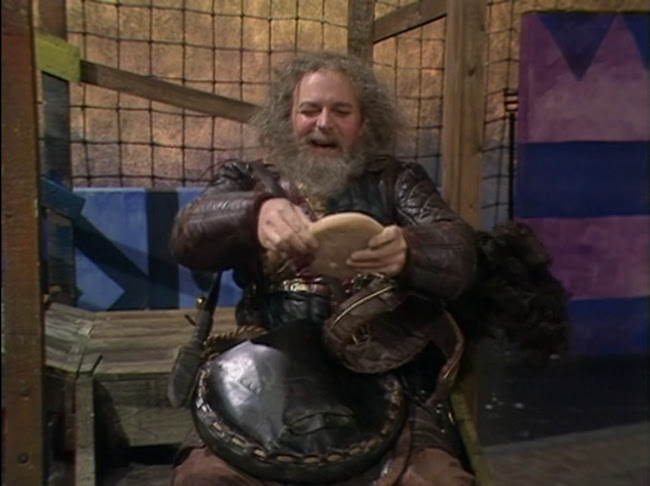 She also includes a broad comedic moment for him where he flees a battle and starts to snack on some bread when he thinks he's at a safe distance. But while the Falstaff of Henry IV has no direct historical analogue, the one in Henry VI seems to be based on the real Sir John Fastolf--in fact, some editions of the play spell the character's name "Fastolf"--who had a reputation for cowardice now considered to be undeserved. He certainly seems to have had the respect of one of the ablest commanders among his adversaries, Joan of Arc, who demanded her forces be wary of his approach to Orleans. She's recorded as saying to a subordinate, ". . . as soon as you hear of the arrival of Fastolf you will let me know, for if he gets through without my knowing it, I promise that I'll have your head cut off." 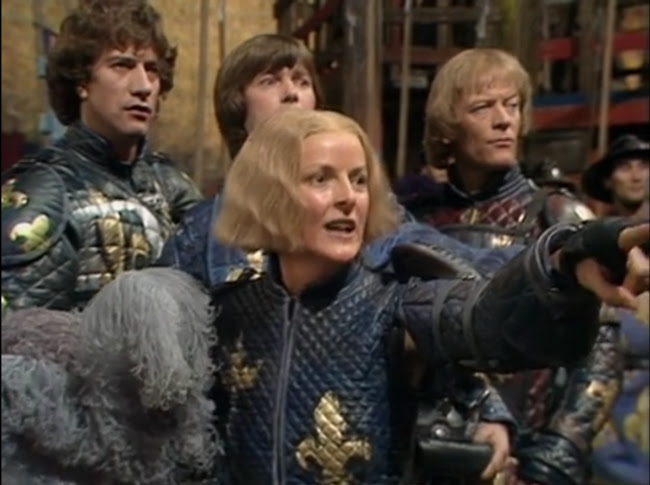 Henry VI: Part I also takes some liberties with Joan of Arc though the play accords her more valour and skill than it does Falstaff. Brenda Blethyn plays Joan in Jane Howell's production with a broad northern English accent emphasising her provincial background. Her lines often have the quality of clear common sense next to the male French commanders whom Powell portrays as a gang of bumbling buffoons, including the French Dauphin, Charles (Ian Saynor), whose devotion to her is portrayed as a bug eyed puppy love. 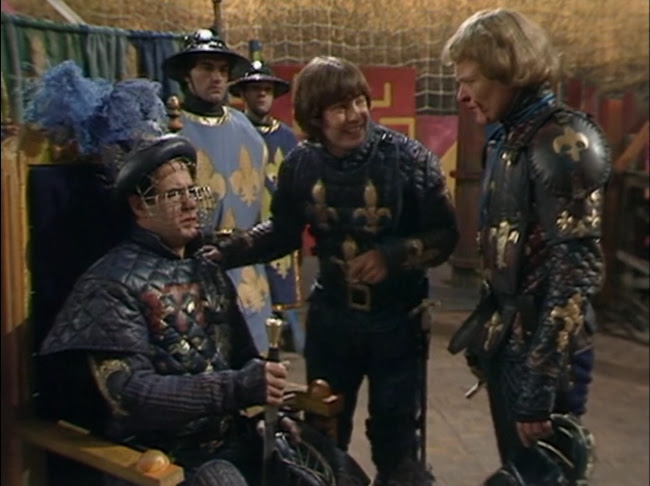 Far from the devout soul heart-breakingly portrayed in Carl Dreyer's film, this Joan turns out to be every bit the witch the Inquisition condemned her for being and a hypocrite, too. In her final scene she first calls herself a virgin then tries to save herself by claiming to be pregnant. Whether or not Shakespeare and his collaborators are really trying to smear Joan is more debatable than one might think, though. For one thing, it's the Duke of York who sneeringly condemns Joan, played in this production effectively by Bernard Hill (wearing a wig that seems to be trying to get away from him). 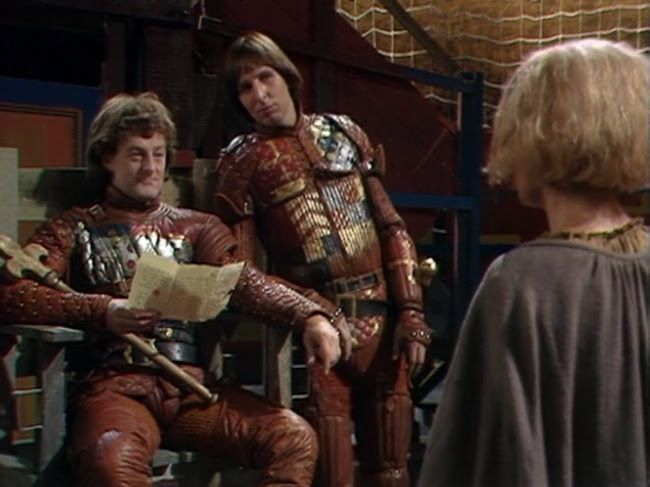 He's one of the two faction leaders in that garden scene where noblemen choose between red and white roses after a seemingly trivial argument turns ugly. York's pride and posturing are matched by Somerset's (Brian Deacon) and histories of rivalries and loyalties come to a head over flowers. The King who, despite lending his name to the play has a fairly minor role, tries to make peace by mingling York's cavalry with Somerset's infantry when sending them to France but this has the result of both taking it as an excuse to blame the other for not reinforcing Talbot. Their inaction leads to Talbot's defeat. 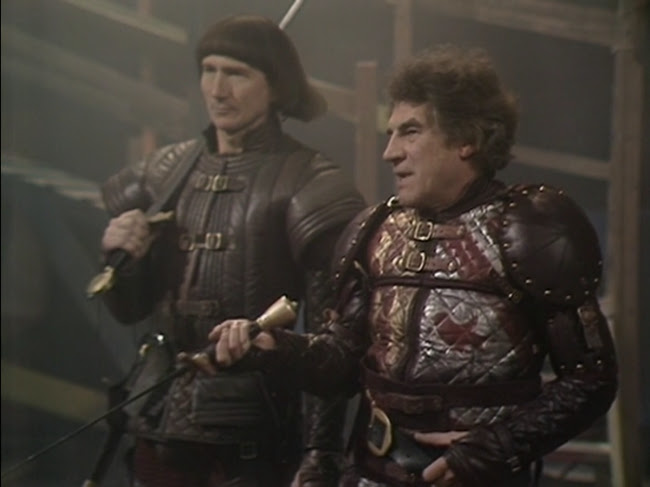 Portrayed in the play as the epitome of a great English knight, Talbot's defeat is a poignant symbol of the dangers of infighting. Trevor Peacock plays him in Jane Howell's production and really elevates the role, appearing world weary and heroic in battle scenes and humorously awkward and out of place in the king's court and the home of the Countess d'Auvergne (Joanna McCallum) who tries to entrap him--a scene Howell wisely plays again for comedy. The first part of the play has so much rapid actions and plot developments on top of each other that they do seem best suited for a sort of Keystone Kops tone, though this does sit oddly with more straightforward dramatic scenes later on. 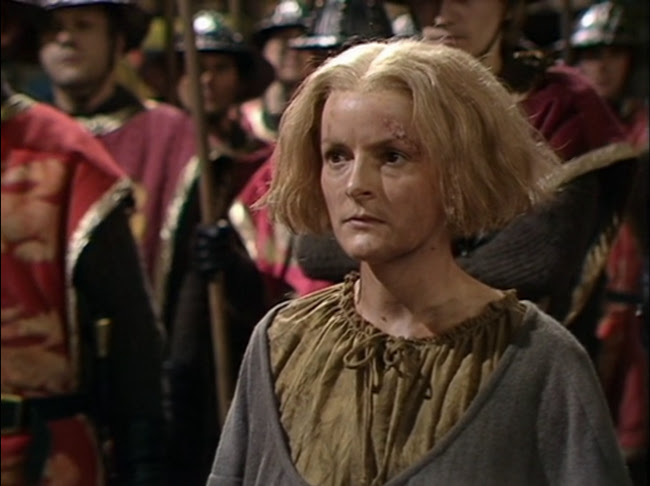 Joan's attempts to save herself in the end could be ranked alongside Falstaff in their heights of cowardice and yet Falstaff's cowardice has been a fertile point of interpretation and reinterpretation over the centuries. Falstaff's speech condemning honour in Henry IV is seen by many as profound, including Orson Welles whose respect for Falstaff was clearly great. One could also interpret Talbot and his son's final scenes, in which both refuse to flee a battle as a point of honour and thus both perish, as another subtle argument against that kind of devotion to honour. I think it would be fair to see Joan as a more nuanced character.

Approaching plans cement the silly bank.
The fishing tackle formed the brains of this.
As Terry-Thomas counts his teeth and rank.
As fragrance heaves ashore enforcéd bliss.
From air impressions build a golden chain.
Illusion's metal prised the place of wood.
The seeds for ants descend as palid rain.
Yet ev'ry leg could say just where it stood.
In silver orbits crickets jumped for Mars.
A tinsel building brought recurring dreams.
A billion people wait in idling cars.
Unwieldy stitches seal the jacket's seams.
A want of colour yet was brightest hue.
A light condemns the shapes to kinds of true.