Gambles in a Fairy Light 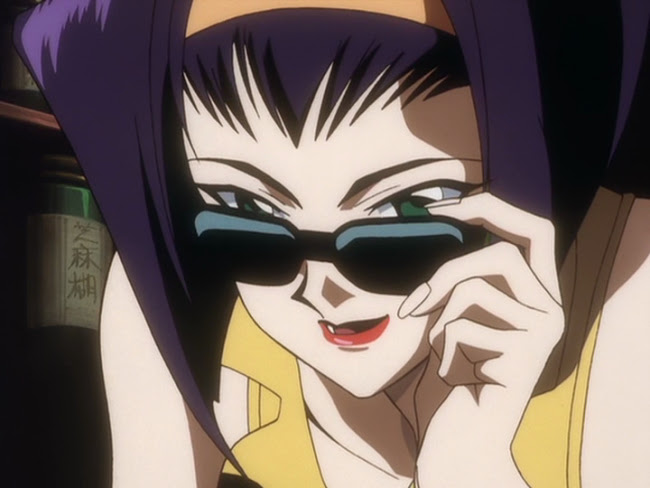 Three episodes in, Cowboy Bebop finally introduces Faye Valentine, its female lead. Faye herself, and the episode that introduces her, continues the show's jumbling of familiar symbols, forcing us to take characters and events on their own terms. 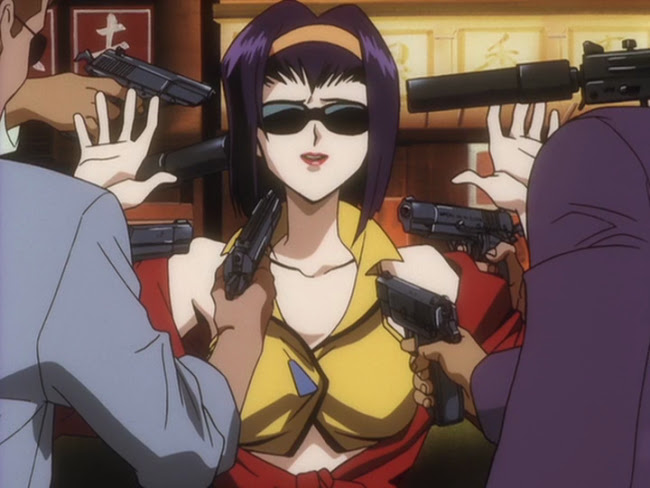 The title of this episode, like many of the episode titles, comes from a famous English language song, in this case "Honky Tonk Woman" by The Rolling Stones. The song's description of a promiscuous woman who's left the singer broken hearted doesn't really fit Faye insofar as she never seems to break anyone's heart over the course of the series. But does fit insofar as she is a woman who is quite comfortable exploiting men for her own pleasure only to cast them aside later. Which makes ironic the quote from Goethe included in the episode, "Only hands can wash hands," which comes from an epigram:

Which Google translates as:

Man with buttoned pockets,
Nobody cares for you:
Hand is only washed by hand;
If you want to take, give it!

When Jet tells Spike that Charlie Parker had spoken the words in his dream, Spike wonders with some apparent scepticism if Charlie Parker would quote Goethe. The great jazz musician of the mid-20th century does seem a long way from the German poet of the early 19th. And yet, why shouldn't he quote Goethe? 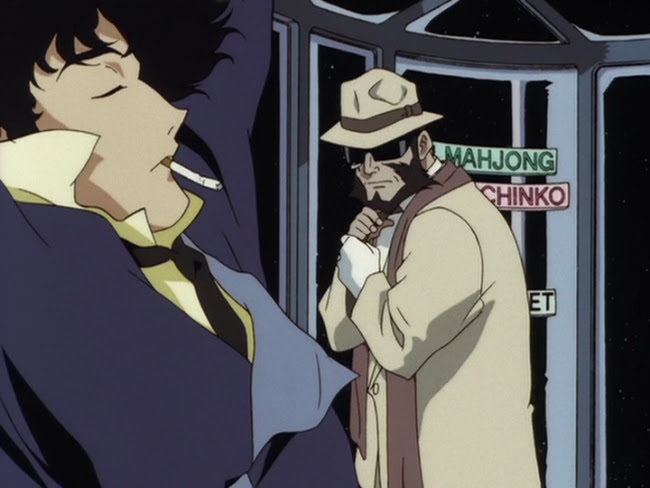 Charlie Parker is certainly a more appropriate figure for Cowboy Bebop as he is considered one of the founding innovators of the jazz subgenre called bop or bebop. Characterised by spontaneous improvisations based on familiar jazz melodies, one could describe it as a form of post-modernism, yet it is a much more affectionate version than that of someone like Salman Rushdie. Rushdie's version of post-modernism is generally bent towards subverting and fighting the familiar. The great bop artists instead took the familiar and made it their own with expansions based on their own feelings and instincts.

And one could say that's the world Cowboy Bebop is presenting--familiar symbols re-contextualised and built on by new generations of people, naturally growing their own impressions and associations. The show's score by Yoko Kanno frequently seeks to emulate bop musicians, particularly during action sequences where fluid animation complements Spike's strangely easy going martial art. But that's an issue better left to be discussed with episode eight. 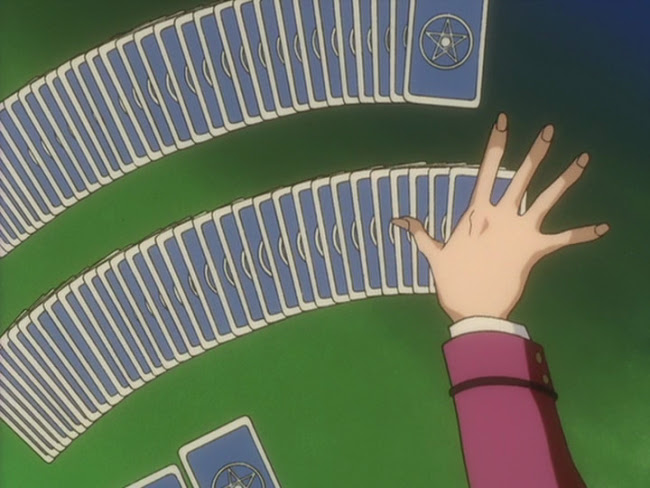 Faye first meets Spike at a blackjack table where she's been forced to act as dealer. Once again, the show makes a point of how you can't trust appearances when Faye mistakes Spike for the man she's supposed to be making a surreptitious exchange with. Spike happens to look like him a bit. 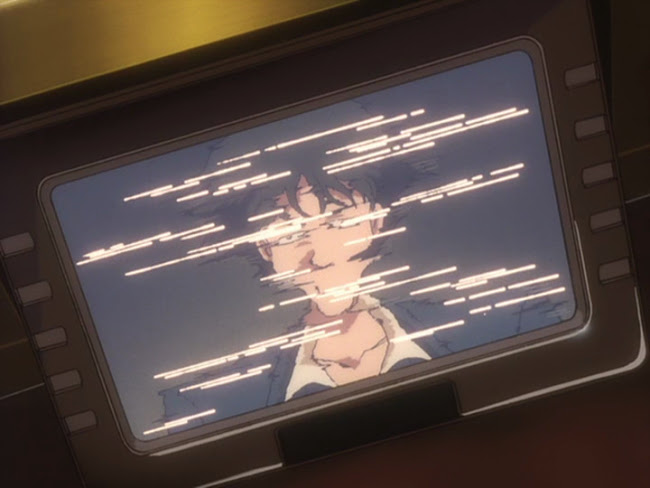 Faye is voiced by the great seiyuu Megumi Hayashibara, a voice actress known for versatility. It's extraordinary to think the same woman voiced Rei Ayanami on Neon Genesis Evangelion and Girl Type Ranma in Ranma 1/2. It's no wonder Satoshi Kon chose her for the lead role in Paprika that required such versatility.

Faye Valentine's name is one of the more straightforward uses of symbolism. "Faye" can refer to fairies, as she herself points out in a later episode, but it also has the connotation of treachery or illusion, so as a "fey valentine" she presents a counterfeit lover, like the "Honky Tonk Woman", a capricious figure of heartbreak. Though Faye is more likely to break a safe than a heart. 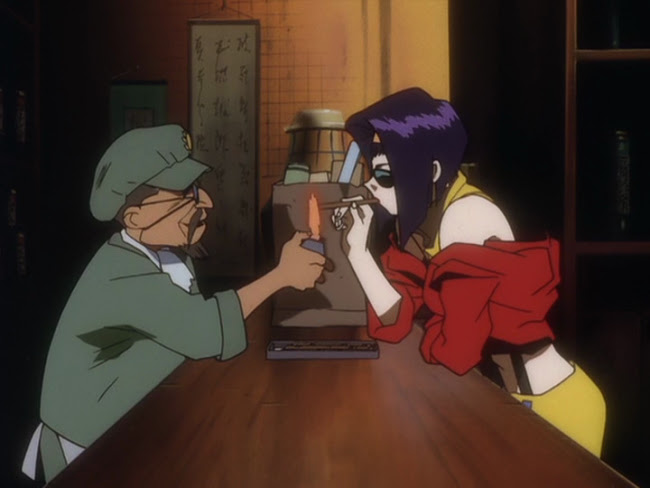 But her sexuality is always on display visually however infrequently it's invoked in the narrative. The mob boss who captures her at the beginning of the episode finds an ace concealed in the seat of her shorts and Faye's look of discomfort, which at first seemed to be provoked at the unwelcome molestation, is revealed to have signified her reaction to her cheat being discovered. Her clothing is self-consciously fetishistic and one could call her a femme fatale, if a particularly benign one. She's never a villain in this episode but more of a competitor for Spike and Jet. 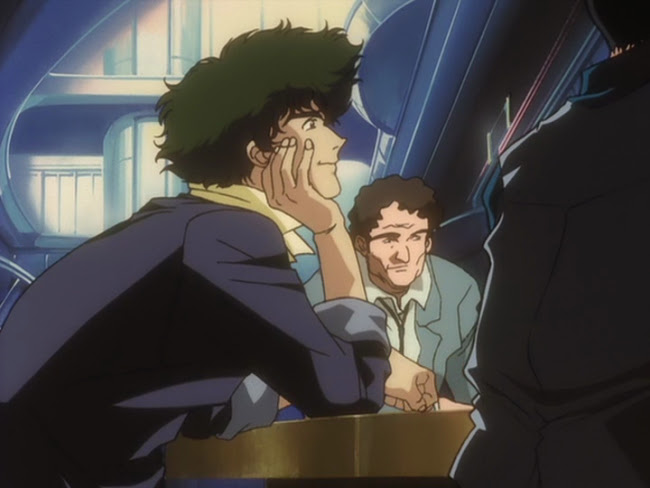 Why aren't Spike and Jet interested in her sexually? One of the models for Spike is the famous anime character Lupin (himself based on the famous French thief character) and one of the more striking differences between Spike and Lupin is Spike's stoicism and coolness compared to Lupin's unabashed, comic lasciviousness. We learn later more about the women both Spike and Jet have fallen in love with. Instead of the coy flirtation that the protagonists are too self-conscious to acknowledge found in most anime, Spike and Jet are presented as too mature to pursue a woman simply to gratify sexual pleasure. Faye, meanwhile, is too mercenary to waste time being horny. Somehow this does add a sexy undertone to things, like the notes in jazz that aren't played. Like a Hitchcock woman, Faye is frequently humiliated and her constantly referred to debt, and her lack of shame over it, have the piquancy of original sin. On the other hand, Jet and Spike are also often humiliated and at her mercy--the physical vulnerability they trade with each other adds to the other elements to highlight those notes that aren't played. 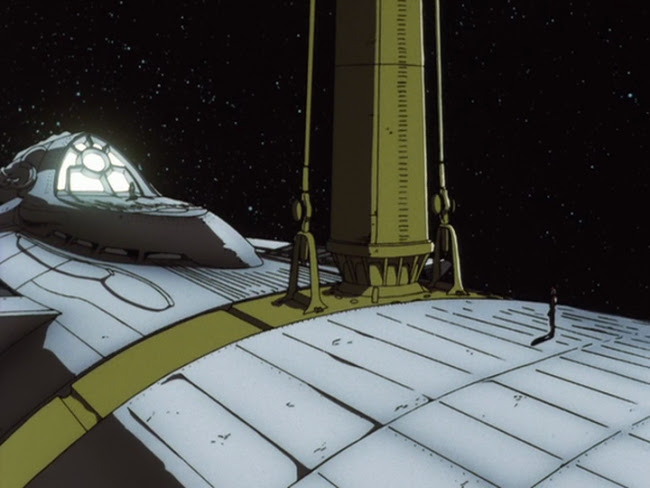 Faye cuts in on a fantastic set piece in the climax of the episode where Spike goes EVA to make an exchange. He and the other party are to toss their respective items across empty space between a slowly rotating, enormous pylon of some kind. 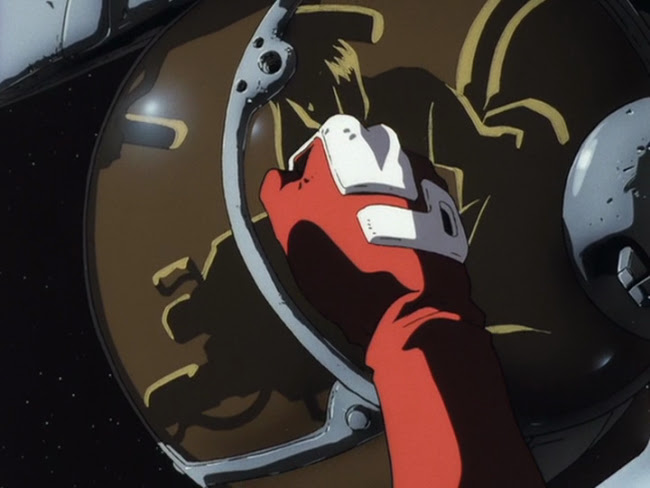 And then Faye comes in to take the goods and there's a callback to her calling herself Romani, or a gypsy, which Spike now calls her with some bemused respect. Of course, we later learn than this is another familiar symbol in which we shouldn't have put our faith, and yet it's not necessarily false.