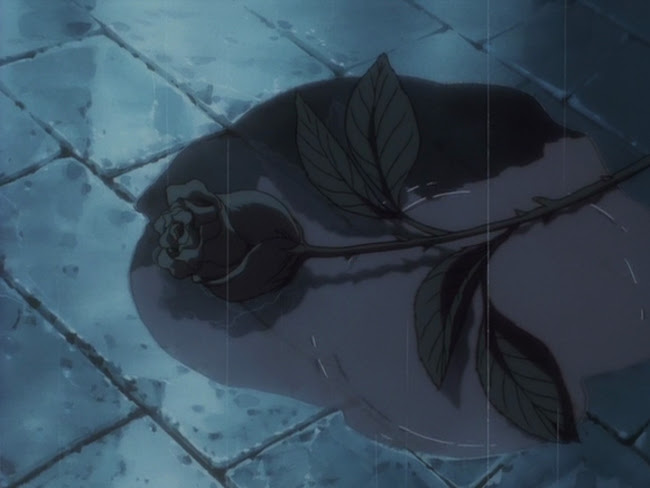 Cowboy Bebop turns twenty years old this year. Since its premiere in 1998, its audacity of style, its inventiveness combined with an evident work ethic have remained unique. There are plenty of other great anime series but none have so successfully divested themselves of any established genre, something its creative team did quite intentionally as the original release featured the tagline, "a new genre unto itself." It is in fact, as many people have noted, a mixture of genres; predominately space opera, cyberpunk, western, and film noir. To properly pay tribute to this twenty six episode series (and one movie) in which every episode has the scope of a stand alone story, I'm going to be writing about individual episodes, or "Sessions" as the series refers to them, throughout the rest of the year. 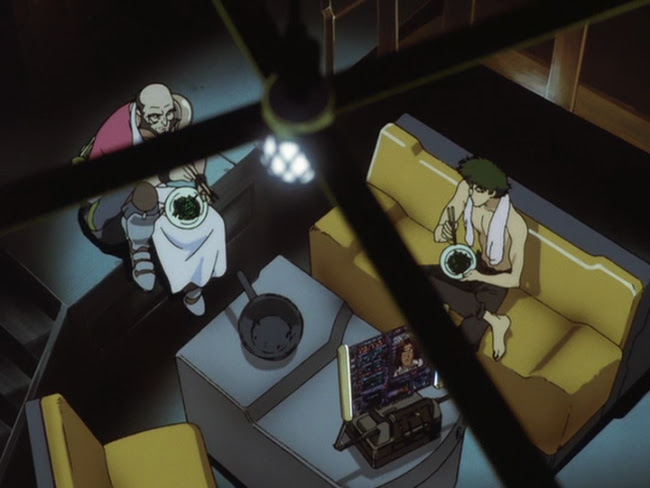 Many people regard cyberpunk as a definitively post-modern genre but Cowboy Bebop demonstrates why I like to call cyberpunk "post-postmodern". I've heard recently there's a misconception going around that post-modernism invariably has a leftwing political component but it doesn't. Post-modernism simply refers to a work of art that requires the audience's familiarity with existing cultures or works of art and often requires an audience that is happy to not get lost in fiction--that is, an audience who enjoys a work without suspending disbelief. There's a lot in Jean-Luc Goddard's Alphaville, for example, that doesn't make sense in terms of any internal logic of its own universe but it all does make sense as a commentary on film, particularly film noir. In the first episode of Cowboy Bebop, "Asteroid Blues", we see how the show takes one of the typical qualities of a post-modern work--taking familiar symbols out of their original contexts and applying them elsewhere--but breathes life into it for its own sake. 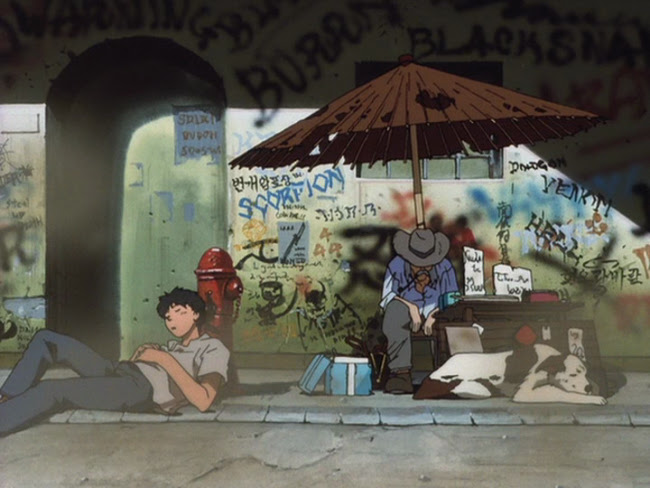 Our protagonists visit an asteroid named Tijuana. It's not the Tijuana we know, it has some aspects of our Tijuana, including a reputation for criminality and desperate people. But from the people who live there and its location we know it's not the same place--it may have been originally a comment on the original place but now it's its own place. This is highlighted by three old men; Antonio, Carlos, and Jobim (their names themselves references to the great jazz musician Antonio Carlos Jobim) who reminisce about the hard work of building the place when they were younger. "Tijuana" isn't just some kind of subversive reconfiguration to get you to think about what Tijuana really means. It's a lived in place, its a sincerity that grew up organically on top of an appropriated symbol; it's post-post-modern. 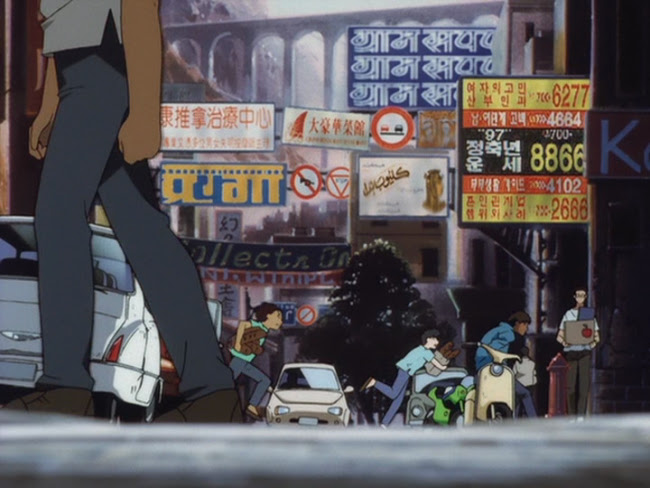 Oh, the detail in the backgrounds. The stories we don't hear are evident in little slices of action, like the kids running across the street with loaves of bread. The main plot itself avoids the direct route--normally the first episode of a series is about the main characters. Instead, "Asteroid Blues" is predominately about two characters we never see again--a rogue gangster named Asimov and his girlfriend, Katerina. 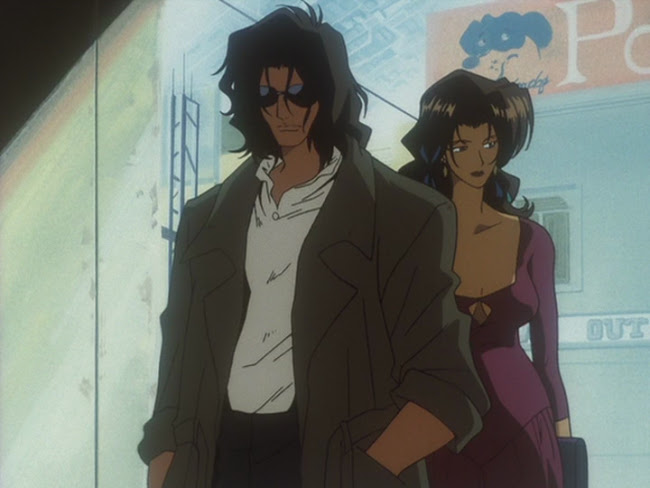 Theirs is a film noir story, not unlike Sterling Hayden and Jean Hagen in The Asphalt Jungle--a woman devoted to a desperate man who's going down the wrong road. We meet two of Cowboy Bebop's main characters, Spike Spiegel (Koichi Yamadera) and Jet Black (Unshou Ishizuka) as relatively minor characters in Asimov and Katerina's story. They're two bounty hunters after the bounty on Asimov's head, though Spike seems to have some sympathy for Katerina after he accidentally-on-purpose collides with her while she's carrying groceries. She catches him trying to steal most of the contents of her bag. 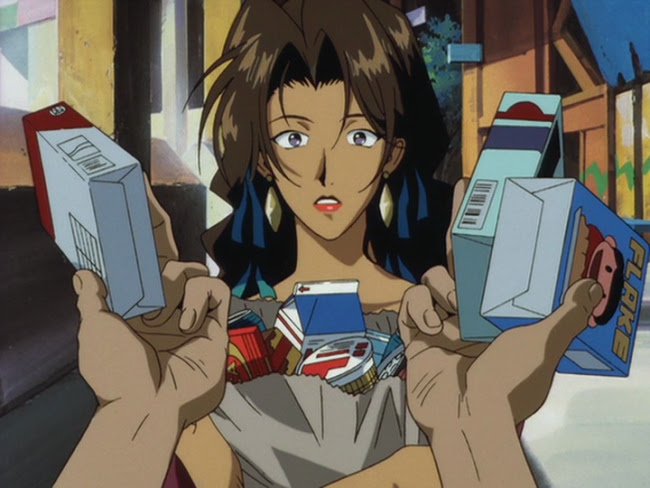 Spike describes himself as an old fashioned cowboy. We eventually learn a lot more about him but apart from a brief unexplained flashback at the beginning of the episode we don't get much about Spike more literal than this. From the way he says it before telling her he's going to allow her and Asimov to walk away it suggests he espouses a certain chivalric code. As the episode allows us to learn about Spike and Jet entirely through their reactions to the two criminals (as well as to mundane phenomena like food and sleep) the characters grow organically on top of the symbols they present much as Tijuana grew up on top of its symbols. Spike and Jet, like everyone else, are both collections of appropriated and lived in symbols. They both speak Japanese (unless you're watching the overrated English dub) but they have western names. Their clothes are amalgamations of various cultures in our present but they have histories that grew up organically in their reality. Asimov and Katerina are apparently Hispanic but their names are Slavic.

As interesting as Asimov's trouble is with the strange "red eye" drug he takes that gives him super speed and strength, I doubt anyone regrets its Spike and Jet we're left with by the end of the episode. We know next to nothing literal about them--they present cool visual character designs along with voice performances and dialogue that's laid back but also somehow grave like Robert Mitchum in Out of the Past or Charles Bronson in Once Upon a Time in the West. They make us want to know more about them even as what they do give us to start with argues for the value in their immediate state of pure impression. Instead of being merely a reference to old films noir and westerns, it sincerely adopts the virtues of the old storytelling techniques.

Posted by Setsuled at 11:22 AM
Email ThisBlogThis!Share to TwitterShare to FacebookShare to Pinterest
Labels: anime, cowboy bebop, television, tv show