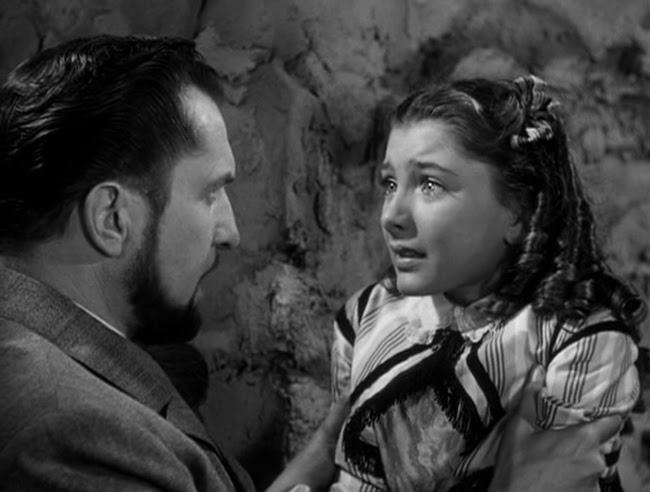 There are many strange and sinister tales of European settlers in America, perhaps none stranger than that of James Reavis. His scheme in the 19th century to establish a claim on Arizona based on ties to 18th century Spanish nobility formed the basis of Samuel Fuller's very strange 1950 film The Baron of Arizona. An off-puttingly uneven film I suspect was borne of conflicted motives, some that might have been intentionally buried, it nonetheless has a solid foundation in a lead performance from Vincent Price as Reavis. 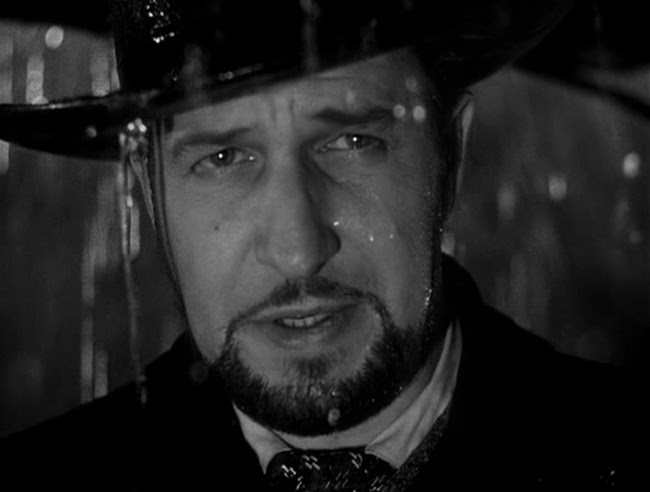 There's a striking similarity to Citizen Kane in an early scene where Reavis shows up on dark, rainy night to the home of a young girl in order to bestow upon her an inheritance that will drastically change her life. Poor Sofia (Ellen Drew) is just one part of Reavis' intricate, brilliant swindle. 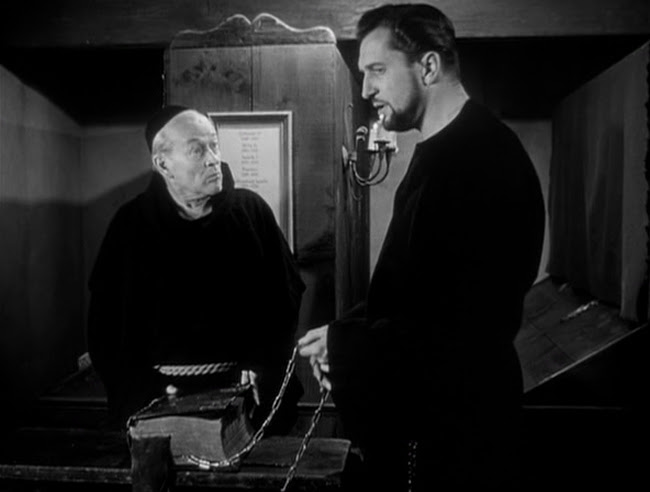 While Sofia is being educated to act like and truly believe herself to be a Baroness, Reavis travels to Spain and joins a monastery with the sole purpose of infiltrating the monastery's library to falsify a one hundred year old record. He seeks to establish Sofia's ancestor as being granted a claim to the Arizona territory by the king of Spain. The real Reavis' scheme was about as intricate except the real life version of Sofia entered the story much later. 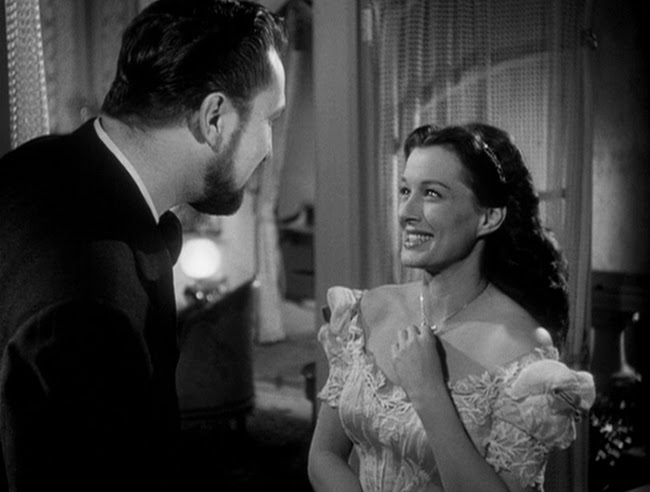 Fuller gives us something creepier, a story Price is certainly suited for. When Reavis returns from his adventures in Spain, he finds Sofia a full grown woman who gazes on him with unabashed rapture as one of the only two men she's known all her life. He shifts from the role of father to that of husband, thus making himself Baron of Arizona. 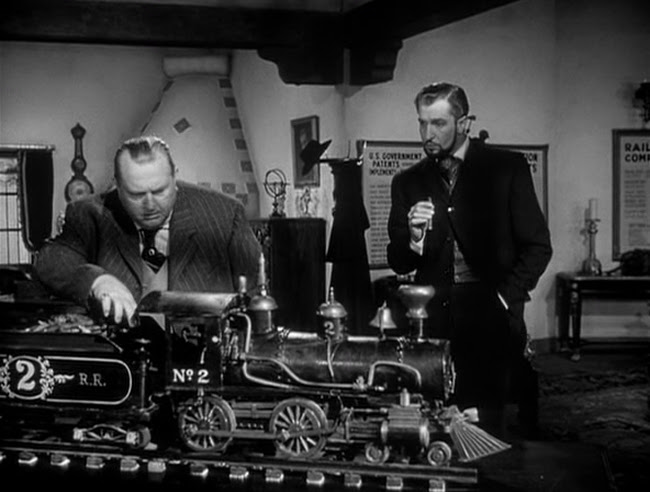 The film formed the basis of Quentin Tarantino and Matt Wagner's Django/Zorro, a comic series in which Tarantino's cinematic hero teamed up with Zorro against a Duke of Arizona. Django/Zorro's version of Sofia is far less complicit, as might be expected of a Tarantino heroine, and the Duke is far more clearly a villain than Price's Reavis. But a more striking difference is in how the Duke's defeat is partly accomplished by Django and Zorro aiding an uprising of Hispanic labourers. Whether Fuller had considered how the story of The Baron of Arizona connected thematically to disenfranchised American peoples is unclear. White land owners rebel against Reavis in the film, as they did in real life, and in one shot we do see a Native American man seemingly allied with them but not speaking. 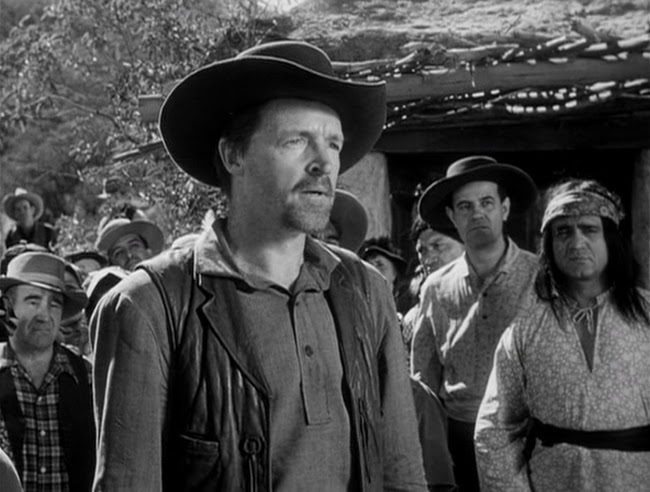 Maybe this was the most Fuller could do in the era of the Hays Code. It was fourteen years before John Ford's Cheyenne Autumn, a western that portrayed the Northern Cheyenne Exodus as part of the long term crimes committed against Native Americans by European colonists and the United States. 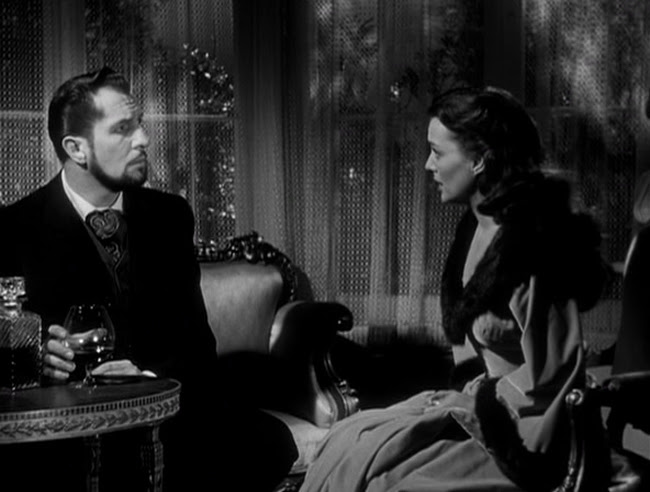 Maybe Fuller had something like that in mind, though, when it's revealed late in the film that Sofia has Indian blood. This is partly why the latter portion of the film feels completely destabilised and the viewer is left uncertain as to who the heroes and villains are. Sofia's claim is part of a swindle and yet maybe she has the most honest claim of all.

For submarines, the sandwich fills the world.
At lunch the peace became about the breads.
Around the edge a data card was curled.
A cookie claims the thoughts of crumbled heads.
Beneath the golden foil silver waits.
A phantom hanged in island spoils then.
The soil rashly eaten never sates.
A claim escaped the dreams in fevered din.
The water took a fender for the boat.
Crustacean teams demolish metal hulls.
A look conveyed a pen to folly's note.
To sleep again the violent washer lulls.
A desert stage condones a summer play.
Abnormal shields conceal the hotter day.

Posted by Setsuled at 8:10 AM
Email ThisBlogThis!Share to TwitterShare to FacebookShare to Pinterest
Labels: movies, samuel fuller, the baron of arizona, vincent price