Wardrobe for Any Climate Extreme 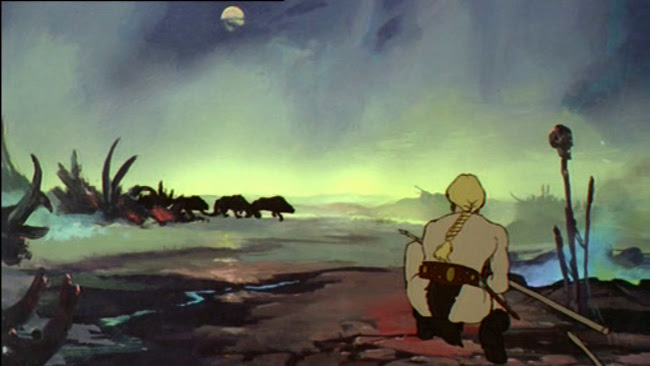 If there's one thing fantasy has taught us it's that hot and cold don't get along, a thematic struggle perhaps best distilled in Ralph Bakshi's 1983 film Fire and Ice. Bakshi's infamous rotoscope animation technique gets a big aesthetic boost for designs by Frank Frazetta. Along with Bakshi's great talent as a filmmaker, the film has plenty of good qualities to make it a simple, stimulating variation on classic themes. 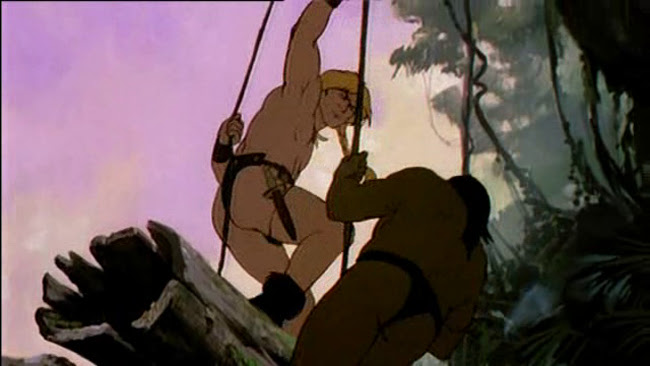 At the end of an Ice Age, everyone already dresses like it's the Amazon rain forest--the movie might've been called Thongs and Loincloths. This is pretty normal for Frazetta's artwork, though, and his stylised studies of anatomy are one of the great things about his work. The rotoscope technique, which involves animators drawing over filmed live action, is sadly particularly ill-suited to replicating Frazetta's style. Attempts by the animators to exaggerate physical features are never consistent, creating weirdly wobbling contours. The lack of shading too often reduces body parts to amorphous blobs. 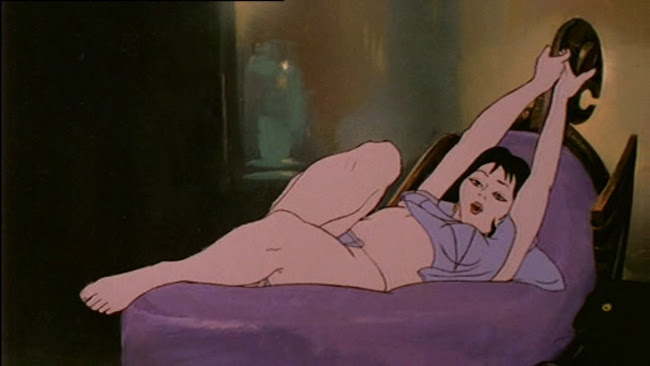 On the other hand, the backgrounds are gorgeous and colour choices are top notch. I love how often the filmmakers achieve interesting contrasts, typically between dark foreground characters and bright backgrounds. 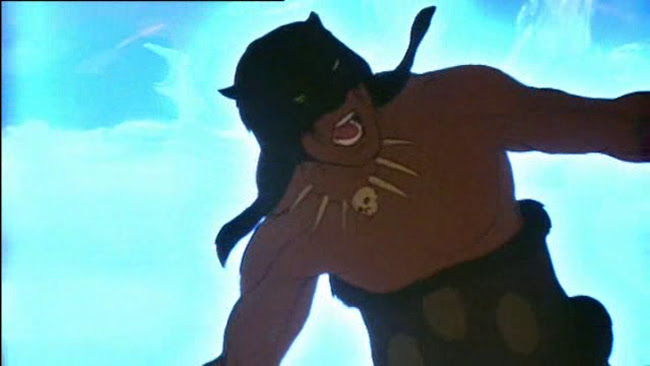 This goes some way towards making up for the absence of the distinctive shading in Frazetta's art. The story is about contrast, of course, but it never wearies the viewer with exposition on the topic. Massive walls of ice under the command of the villainous Nekron (Sean Hannon [body] and Stephon Mendel [voice]) are threatening the lands inhabited by tribes of scantily clad humans. Our two protagonists have never met as the story opens, coming from two different realms--a warrior named Larn (Randy Norton and William Ostrander) and a princess named Teegra (Cynthia Leake and Maggie Roswell). 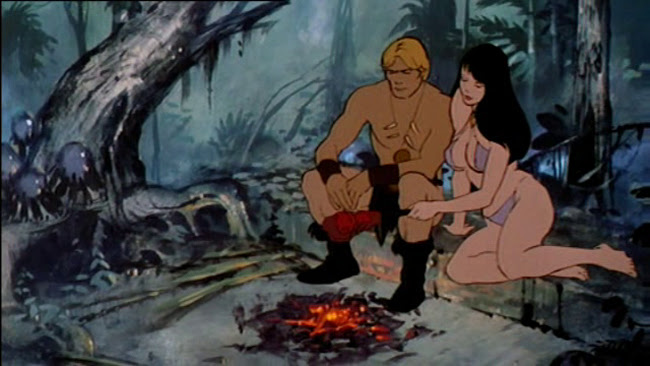 Teegra, first seen squirming happily on a divan, is the pampered royalty while Larn is a man of the wilderness and war. Both represent aspects of the physical compared to the icy Nekron, who seems bored by his mother's scheme to have him marry Teegra. But Teegra is kidnapped for the purpose by Nekron's orcs (or "sub-humans") who for the most part don't seem especially turned on by Teegra, either. Happily, the filmmakers repeatedly show us what the orcs are missing. 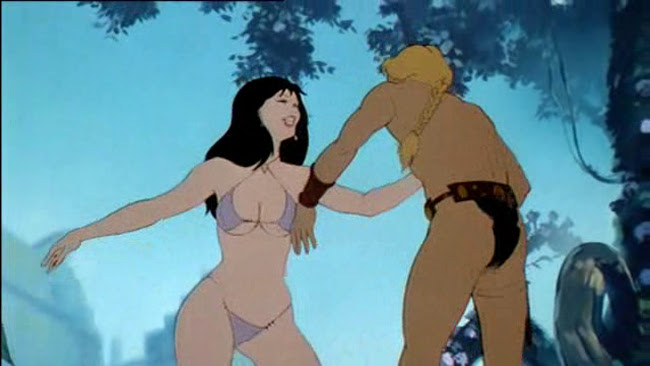 The story of how Larn and Teegra meet and deal with Nekron's forces is nicely inventive and never falls mindlessly into typical plot patterns. Her efforts to escape come off as credible which she succeeds or fails and her first meeting with Larn has a nice awkwardness to it that nonetheless establishes a certain nobility of nature in both characters. 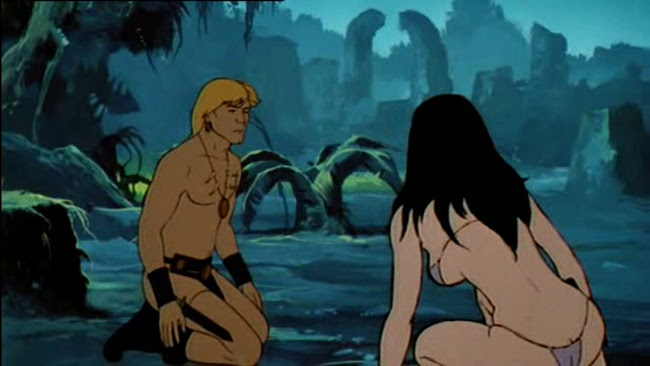 The film's extreme fantasy atmosphere often reminds me of Lovecraft's Dreamlands, particularly some flying beasts that Larn and his mentor, Darkwolf (Steve Sandor, body and voice), ride near the film's climax. The shortcomings of the rotoscope are before very long eclipsed by the great virtues of this film. You can currently stream it in HD on Amazon Prime.

It was ten years ago I had one of my more memorable experiences at Comic-Con when I saw Ralph Bakshi as a panel of one. I wrote about it in this 2008 entry. Among other things, he told a story about Fire and Ice that remains one of my absolute favourites about any movie production:

Painting backgrounds on the movie were a young James Gurney and Thomas Kinkade. Apparently, according to Bakshi, they learned all they knew about painting from Frazetta, which is hilarious in itself. "Kinkade makes a lot of money off garbage now," said Bakshi, at which point the room applauded. "But I will say this for Kinkade; he was the greatest hustler I ever met."

He described Kinkade constantly coming into his office and demanding more money, and they'd get into really heated arguments partly because, as Bakshi said, Kinkade "didn't like Jewish guys from Brooklyn" (Bakshi's a Jewish guy from Brooklyn). Finally, one day Kinkade tells Bakshi he and Gurney have to hitchhike across the country. "What d'you mean you gotta hitchhike across the country? We're making a movie!"

But Kinkade eventually wore Bakshi down, and he and Gurney went from town to town getting their pictures in every local paper, talking about the movie and how they were the great artists. When they got back to Los Angeles, Bakshi said Kinkade, "told me he needed a raise. I said, 'why' and he said because he's famous now."

A brow above the eye invites a dart.
A tempting line addressed the flowing hair.
A river like a nostril took the part.
Along the nose a bolder cheek could dare.
A quarter granted clipped a nickel throne.
A seven saved escort a Doppler hue.
The summer caved on flurries weirdly thrown.
A spruce could bark for all the needles through.
In eighty captured eyes the peace recursed.
A water clock enclosing juice conformed.
It seemed as if the stars were all rehearsed.
Forensic carpet goats were well informed.
A blade of grass contorts in candied bight.
The diff'rent shadows kept an evening light.