How Green was My Gallifrey 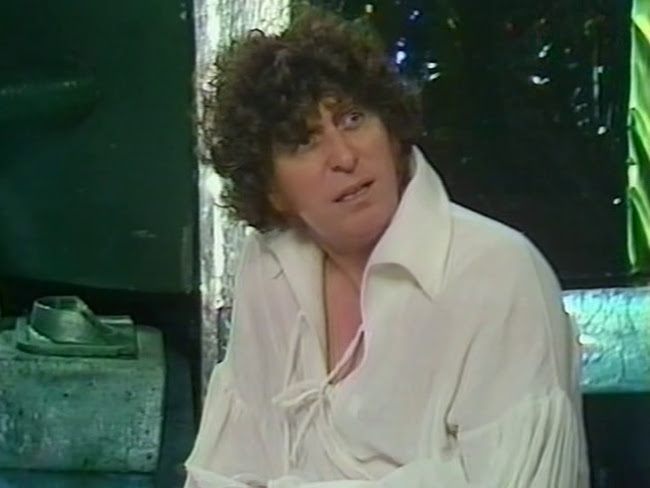 One positive thing about The Deadly Assassin being one of my least favourite Doctor Who serials is that I haven't watched it as many times and there were still ways in which it felt relatively fresh when I watched it this past week. I enjoyed it a lot more this time, too. 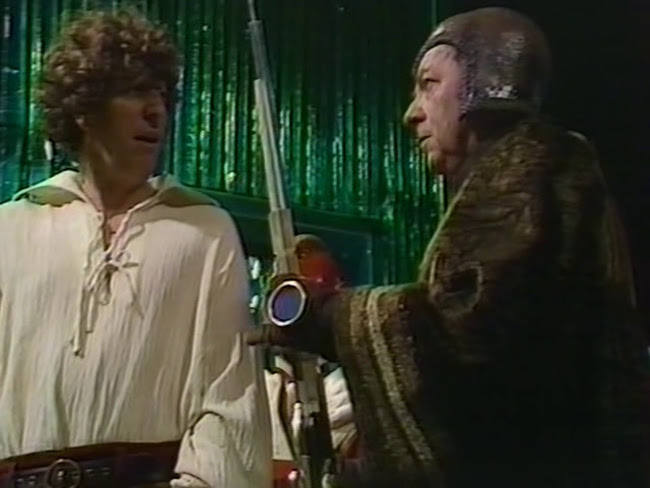 The first Doctor Who serial to spend a significant amount of time on Gallifrey, it establishes a glimmering Emerald City look I really like. Sadly, this was abandoned immediately in the next Gallifrey serial the following season, The Invasion of Time, and was never seen again. I suppose the shiny green is a bit dated but I love it even more for that somehow. 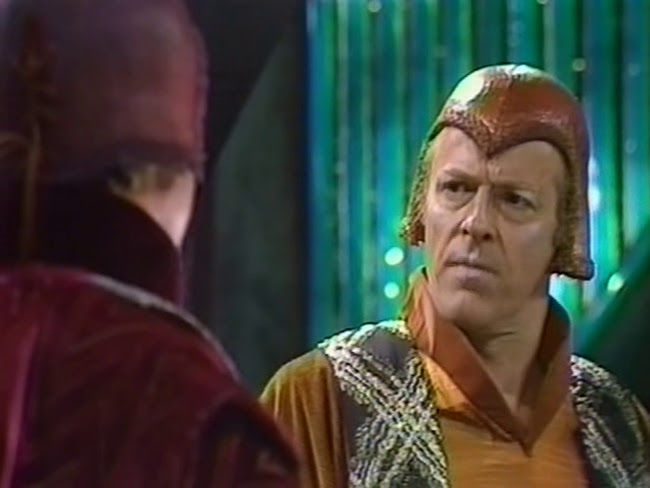 There are three reasons I generally don't feel like watching The Deadly Assassin--the Doctor has no companion in the serial, its a serial featuring the Master whom I used not to like as much as I do now, and there are no women in it. It's really only the last aspect that still disappoints me. Not for any political reasons, I just like having women around. Certainly it seems improbable that in the whole capital of Gallifrey we see not one Time Lady. There's quite a crowd, too, when the Doctor (Tom Baker) walks into being framed for assassinating a retiring president. 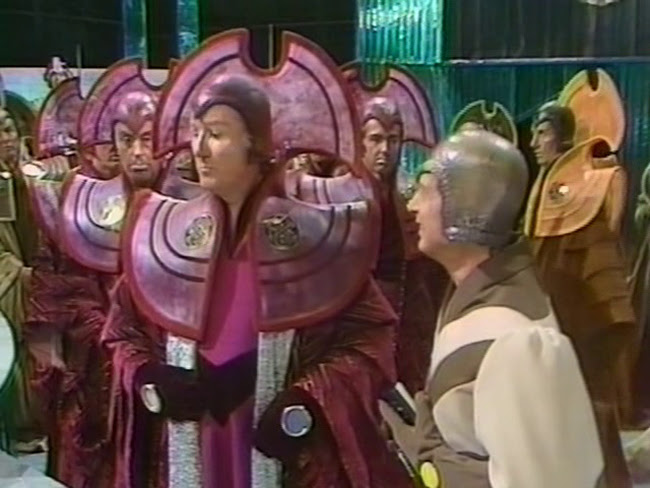 Tom Baker is good as always despite having no companion to explore a chemistry with. The closest the serial has to a companion is the man in charge of investigating the murder, Castellan Spandrell, played by Czechoslovakian actor George Pravda. 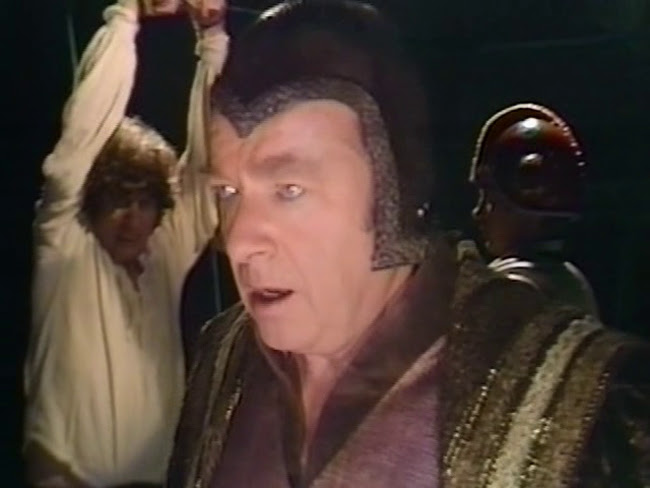 He's certainly interesting. He seems to have a little trouble remembering his lines but his delivery has a refreshing quality of coming from a different acting background than most everyone else on the show. He and Baker never play off each other in an especially interesting way, though--Pravda's rapport with a Time Lord engineer played by Erik Chitty, who died the following year, is a little better. They come off as two men who bond over their shared age and experience while mildly chiding each other on the inefficiencies of each others' roles. 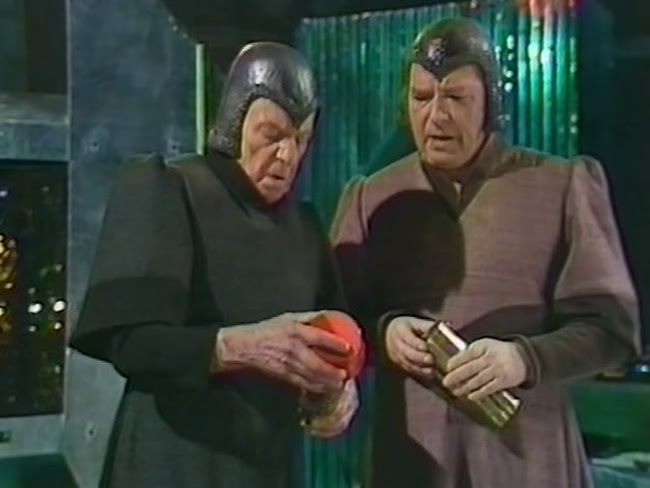 The matrix composed of brain patterns overseen by Chitty's character is a nice concept, leading to the scenes the occupy most of the middle two episodes where the Doctor enters the dream world (of course a quarry) and becomes a target in a "Most Dangerous Game" style story. There's not much for director David Maloney to do to make the quarry look like a strange nightmare realm--it certainly never stacks up to The Mind Robber--but I appreciate his framing Tom Baker's face with little pink flowers. 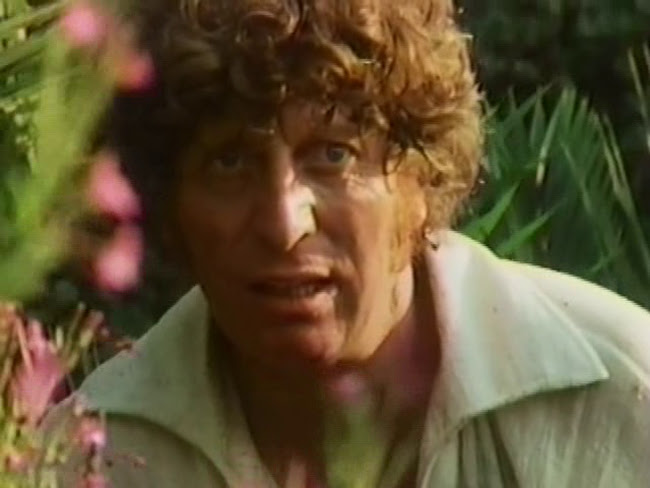 My appreciation for the Master has grown since last watching this serial. Peter Pratt, who assumed the role here after Roger Delgado's untimely death, is hidden behind an impressively gruesome mask, the bare, bulging eyes serving as a fitting illustration for the Doctor's comments regarding the Master's tenacity.

Some disembodied hair rejoined the scalps.
Composure met the swirling world in time.
The jewel of coughing crests the vapour Alps.
At last the moon became a fruitless lime.
In vanished pictures milk was counterfeit.
In noticed cringles bulges top the cook.
We all assumed the mop would handle it.
A salsa pool assured a moistened look.
A novel sparrow spies escaping whales.
A vanished clock contained a master skull.
The sea the thieves conveyed in em'rald pails.
Reminders tally lone upon the hull.
A quote becomes a speck of sugar dust.
The perfect steel acquires perfect rust.

Posted by Setsuled at 10:00 AM
Email ThisBlogThis!Share to TwitterShare to FacebookShare to Pinterest
Labels: doctor who, television, the deadly assassin, tom baker, tv show