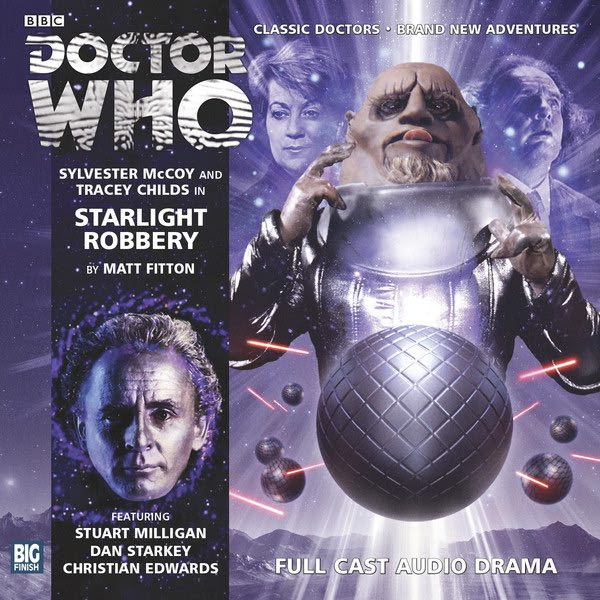 Who would dare rip of the greatest warriors in all of time and space? None other than Grendel from Beowulf in the 2013 Doctor Who audio play Starlight Robbery. Writer Matt Fitton brings back his version of Grendel, or "Garundel", introduced in the audio play he wrote the previous year, Black and White. Maybe he appears in something by another writer but I suspect he's a character only his creator could love (fitting, I suppose) because I was never impressed by how modern and sassy he is--a bit like one of the Pythons doing their gay American impressions (I kept imagining Terry Gilliam saying "Peachy Face"). But the story itself, which continues from Persuasion and features the reincarnated Nazi, Klein, and the UNIT scientific advisor, Will, as companions to the Seventh Doctor, isn't bad.

Garundel (Stuart Milligan) is a little easier to take outside the context of the period setting, too, and I found myself enjoying his scheming along with his blue skinned alien female assistant, Ziv (Jo Woodcock). This pretty young rogue captures the heart of bumbling young Will (Christian Edwards), the relationship between the two mostly evolving nicely over the course of the story with a very effective conclusion that made me want to know if there would be more in future audios.

Klein (Tracey Childs), meanwhile, seems to be channelling her old Nazi self when she starts to build a slow burn, love/hate relationship with one of the Sontarans (Dan Starkey), who are thankfully not played as a joke in this story.

Sylvester McCoy is good as always though the Doctor has kind of a background role for most of the story. He does manage an effectively clever bit of manipulation near the end that has even more effective, unexpected results.