Forbidden Word of the Daleks 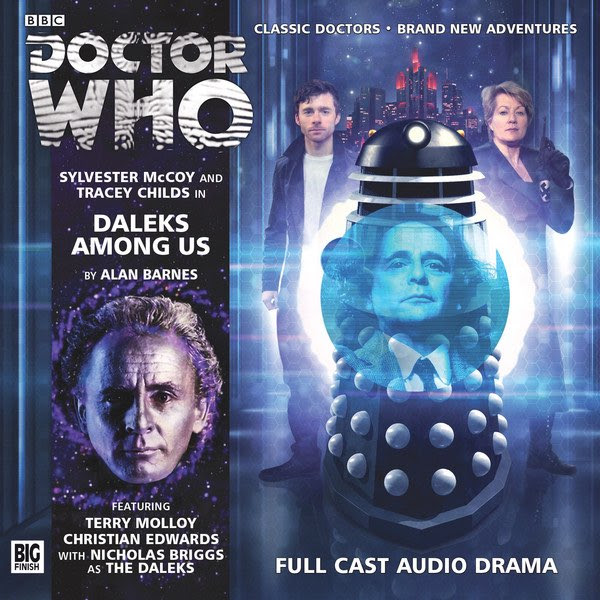 It seems at the beginning of the 2013 Doctor Who audio play Daleks Among Us that it's going to be a nice, paranoid tale about an Orwellian dystopia. The aftermath of the humans winning against the Daleks on Earth eerily has the governing humans enforcing a constant rewriting of history and now Daleks can't even be mentioned. This is justified by the fact that humans turned on each other after the Daleks were supposedly gone over recriminations aimed at Dalek collaborators. But the story ends up going in a far more conventional direction and at best is an echo of Jubilee. But it's always nice to hear Sylvester McCoy as the Seventh Doctor and he does a great job.

Coming after Persuasion and Starlight Robbery, Daleks Among Us forms the final part of a trilogy in which the Seventh Doctor is travelling with the sort of former Nazi, Elizabeth Klein (Tracey Childs), and the new UNIT scientific advisor, Will Arrowsmith. The Daleks are involved now, trying to get their suction cups on the Persuasion Machine introduced in the first story, a device that controls people through powerful hypnotic suggestion. This story goes back to the original concept involving Nazis and makes the not entirely novel thematic connexion between Daleks and Nazis. Yes, they do have a lot in common--belief in themselves as the master race, ideas about eugenics, and so on.

Davros (Terry Molloy), the creator of the Daleks, also features in this story and, as very often seems to happen in the audio plays, is forced to work with the Doctor and his companions after the Daleks have turned on him. But apparently this was the first audio play that paired Davros with the Seventh Doctor--sadly there are no allusions to the great "rice pudding" speech from Remembrance of the Daleks.

The latter half of this audio play features entertaining drama dovetailing confusion about clones with confusion about time travel and writer Alan Barnes comes up with some amusing dialogue. Ace makes a sort of appearance at the beginning in the form of a nude statue of herself with a baseball bat. That's something much easier to get away with in audio format. The word "Liberty" is engraved at the base of the statue on which the Doctor remarks, "A liberty is what she'd have called it."