Following the Dog of the Mind 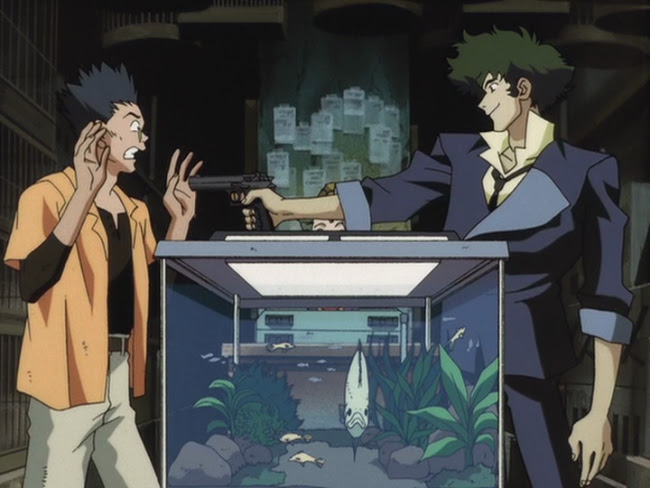 Do you know how important your corgi is? If criminals and scientists are chasing it you should probably take note, a lesson Spike Spiegel ought to have learned in the second episode of Cowboy Bebop. 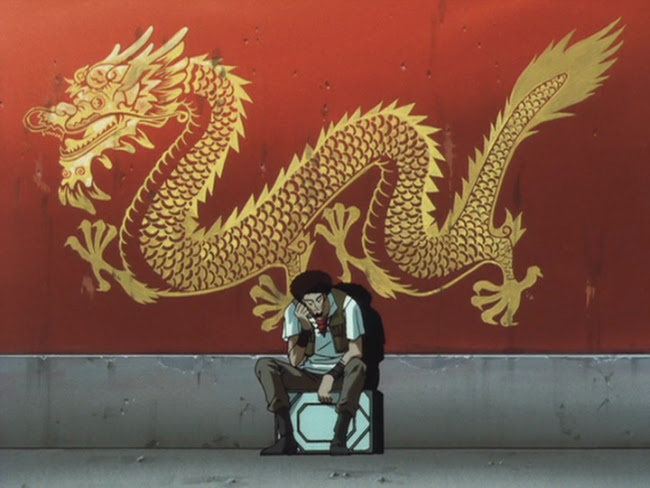 So we move from Western noir to screwball comedy and an undignified chase that introduces us to some bad Martian neighbourhoods. Again, I just have to marvel at how much work went into background details and minor characters. From the kids at the canal to the fortune teller with his bird that picks cards. 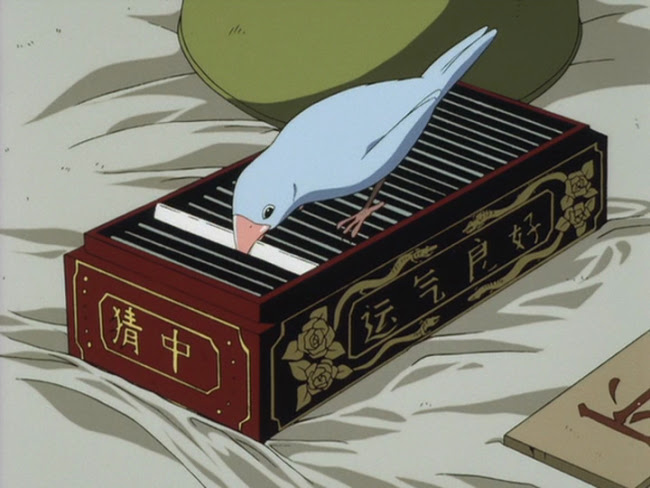 The episode's villain, Abdul Hakim (Ryuzaburo Otomo), even stops to consult the fortune teller when he's frustrated in tracking the animal. Many who have written about this episode have suggested that Abdul is meant to be a homage to Blaxploitation. Maybe. It's a more convoluted issue than it at first seems, probably intentionally so, but it begins with the simple question: is Abdul black? 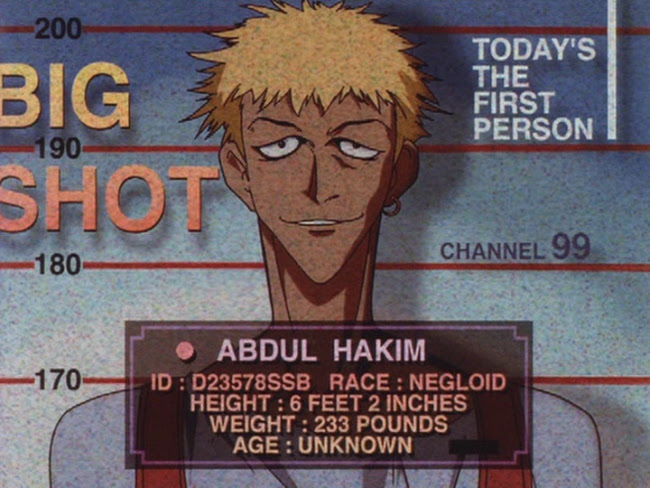 This is his appearance before his latest plastic surgery--it's unclear how many he's had. As you can see, this mugshot identifies his race as "Negloid", a term which, as you might expect, is a big can of worms for people discussing the show in the U.S. to-day. Is it a misspelling of "Negroid" resulting from the Japanese language not distinguishing between the L and R sound? Maybe--and certainly even many of the most prominent anime productions have been guilty of "Engrish" from time to time, though Cowboy Bebop generally seems to have proper English spellings. Everything else seems to be spelled right in that screenshot though the wording of "Today's the first person" is a bit off. If whoever wrote these words didn't know English very well, they might have used a spell-checker, which would again make it unlikely "Negloid" is an unintentional spelling.

The Japanese term for a black person is "黒人" or "kokujin", literally "black person" but according to Japanese Wikipedia, "ネグロイド", "Negroid" is still a politically acceptable term, as it is in many parts of the world--and apparently in some scientific fields in English speaking countries. When I googled the term "Negloid" I found an entry in Urban Dictionary that claims it's a slang term for black people in Japan--and cites Cowboy Bebop as its only source. I'm not inclined to trust this site's insight into Japanese colloquialisms. In a conversation on Reddit, I saw one guy suggesting that the term is an indication of a new recognised race based on a blending of "Negroid" and "Mongoloid". Which I think is a fair guess. Whatever the case, after the first episode's deliberate mixing of familiar cultural and ethnic markers, I think Abdul Hakim is ultimately meant to frustrate familiar categorisation than conform to it. 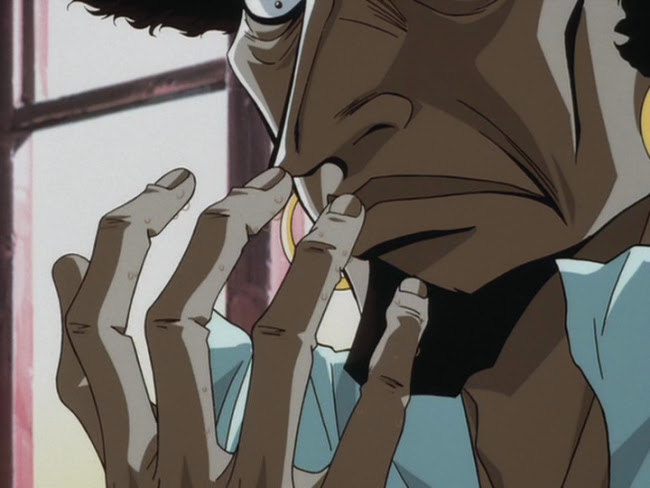 I thought his name was maybe a reference to Kareem Abdul Jabbar. He's certainly tall and the animators do a good job making him seem threatening at the beginning of the episode. Which makes the absurdity of he and Spike (Koichi Yamadera) running after a corgi all the funnier. What a well animated dog, too. 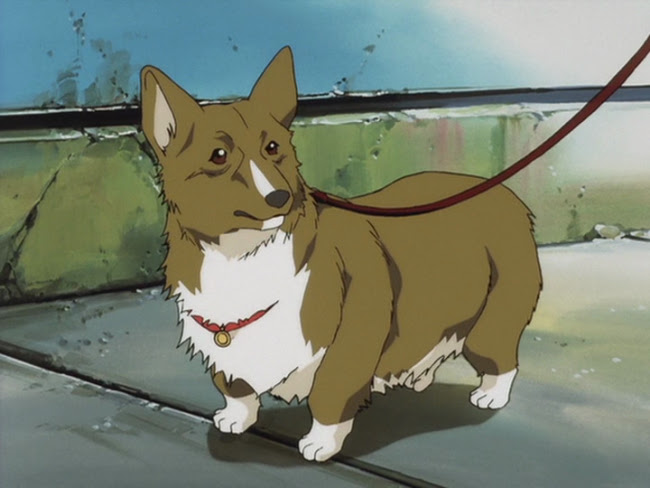 Ein clearly looks like his animators have studied corgi anatomy and movement and on top of that have given him a distinct personality. Usually animals in anime, particularly from the past five or so years, tend to move like people in costumes.

The episode also features a mention of Spike's love for Bruce Lee. Together with the amazing fight sequences in the first episode, it's a harbinger of some great action to follow.

With feather helmets noisy birds arrive.
A battle picked and picking beaks commence.
Flamingos 'gainst the ostriches'll strive.
But wheeling vultures offered no offence.
The evening heat entrapped a candy gem.
A tide belayed a party sitting late.
The candle in its glassy berth was dim.
The wind condemned the island lot to wait.
A crystal found its way to breakfast food.
A lowered grill increased the summer heat.
The metal waves produced a frying mood.
A sitting glory faded with the seat.
A punching thought reserved the apple hat.
Excessive clubs delay the next to bat.