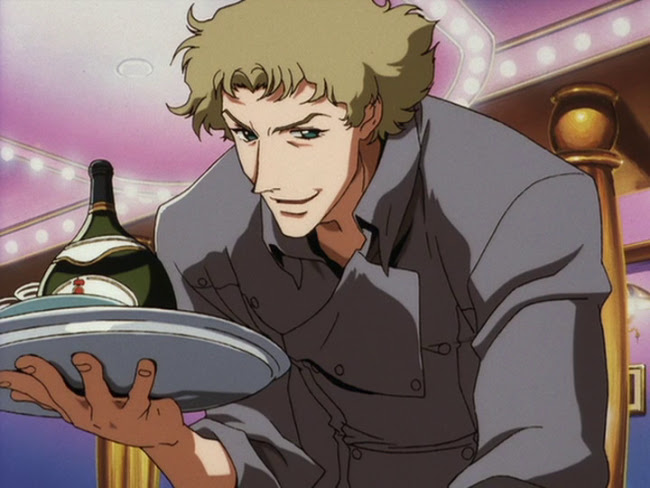 Indulging in some self-parody, Cowboy Bebop introduces a one-off rival for Spike named Andy, a flamboyant bounty hunter who wears the traditionally recognised accoutrements of a cowboy. Faye wryly remarks on how similar the two men actually are but the really interesting thing about this episode is in how different the two are from each other; the variety of ways in which they contrast with each other functioning as self-assessment of the series as a whole and a rejoinder to potential criticisms. 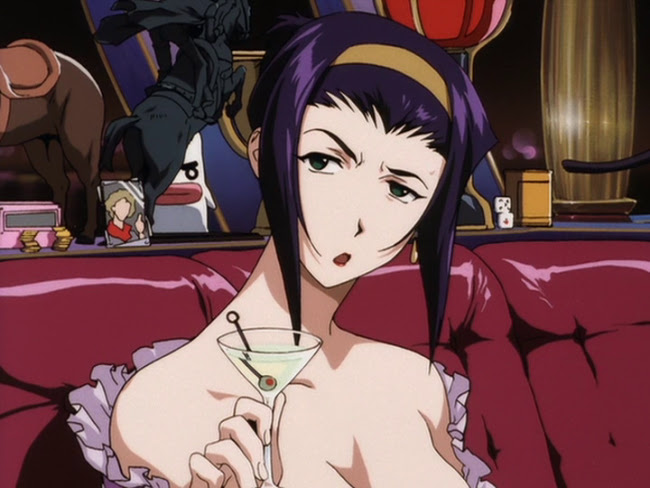 Some have accused Cowboy Bebop of indulging in style over substance. Whether or not you think that's fair it's certainly true of Andy (Masashi Ebara) whose costume and horse are far better suited to show than the practical needs of a bounty hunter. When he appears, he inevitably, through sheer incompetence and lack of focus, foils his and Spike's (Koichi Yamadera) attempts to capture a terrorist who calls himself the "Teddy Bomber" (Takaya Hashi). By the end of the episode, Spike has also lost sight of his goal, he and Andy together becoming completely absorbed in their competition, to the amusing indignation of the terrorist. 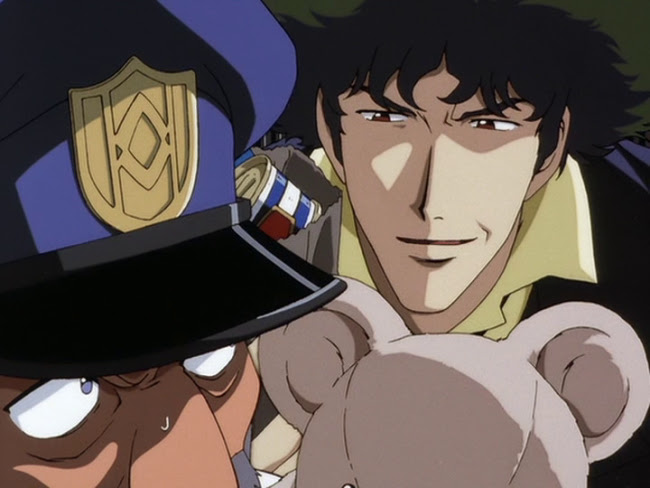 The episode continues the series' rumination on dissociation between signified and signifier--in one of his opening lines, Andy remarks that you can't judge by appearances nowadays. He says this after Spike insists you can tell who the Teddy Bomber is just by looking at him. Andy's simplistic understanding of unreliable signifiers leads him to assume the one who doesn't look like a terrorist must be the terrorist. He has a weak memory, too, and the next time he sees Spike he doesn't recognise him and once again assumes he may be the terrorist. 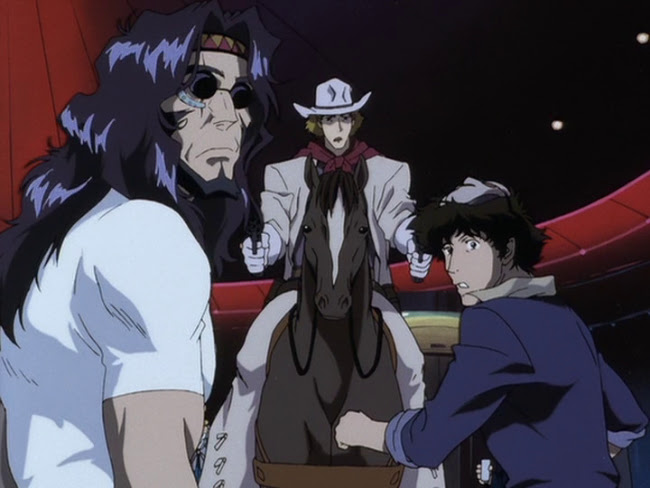 When I started writing about Cowboy Bebop this year, I mentioned how recently some people, particularly on the right, misunderstood "postmodernism" as necessarily referring to a political philosophy or organisation. I recently encountered a leftwing misunderstanding of the term as referring to the denial of all intrinsic meaning in symbols. It may be pointless to say this is wrong, then, but it is--the idea that signifiers are completely arbitrary isn't postmodernism, it's semiology. But you probably couldn't have postmodernism without semiology as postmodernist art requires the viewer or audience to be conscious of the artificiality of the text. Postmodernism is infamously defined primarily as reaction to established ideas rather than a truly coherent philosophy in itself. "Cowboy Funk" is certainly a particularly postmodern episode as it partially consists of a commentary on the series itself. To fully appreciate Andy as a character, you have to be thinking about Cowboy Bebop as a piece of art rather than getting lost in the story itself. You have to be thinking critically about it on at least a very superficial level. Yet the episode's ultimate argument is that the show as a whole is more than this, that Spike is more than Andy. 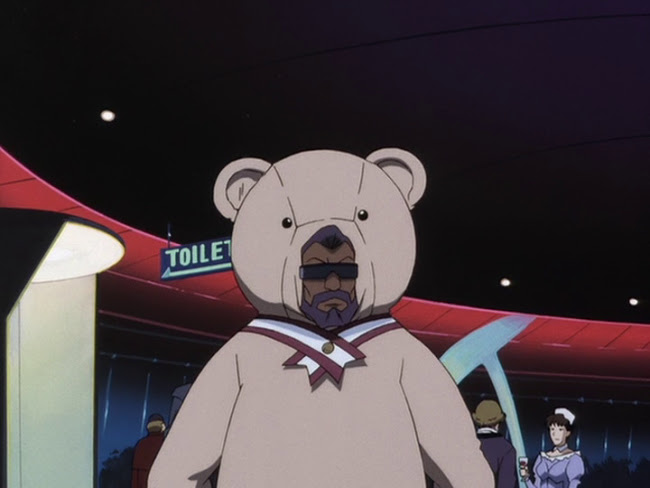 Andy's true opposite is the Teddy Bomber who is so exactly who he appears to be that he shows up to a costume party dressed as a teddy bear. When he asks how Jet (Unsho Ishizuka) and Spike found him, Jet proudly shows off his tracker while Spike dryly remarks he would've known the Teddy Bomber anyway. Just as in the first encounter, Spike makes a remark that he can recognise the Teddy Bomber's true nature by his outward appearance. Certainly a terrorist would be the last person to entertain the idea that symbols are completely arbitrary--a terrorist has to assume his or her actions will have a single, clear, symbolic meaning for people. Yet, as is often the case with real acts of terrorism as much as the Teddy Bomber's, while the acts really do have a profound impact on people, they have very little to do with the effect the terrorist intended. Ironically, when the Teddy Bomber is allowed to speak, finally, at the end of the episode, after he's been captured, he says his intention was to warn people "against all the unnecessary waste created by capitalism lacking philosophy. Planets that needlessly get colonised. Media that needlessly get circulated. And buildings that are needlessly tall to symbolise all of this!" 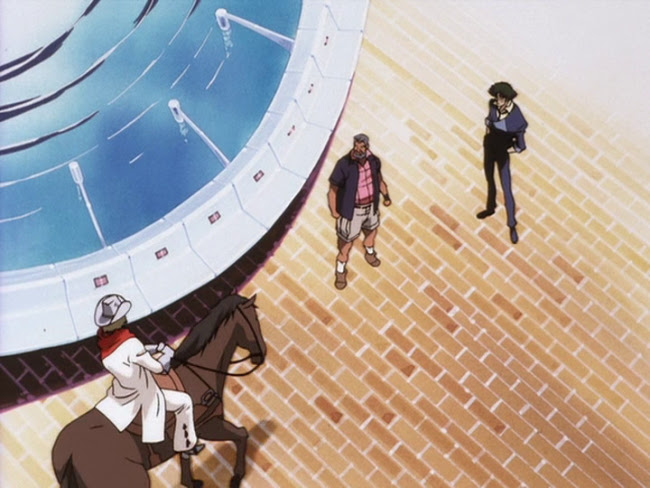 The Teddy Bomber makes a point of not killing people--he only seeks to destroy property, which suggests Cowboy Bebop's director and writer, Shinichiro Watanabe and Keiko Nobumoto, respectively, may not have wanted to present the Teddy Bomber as altogether villainous. But when Andy finally concedes defeat to Spike, it's when Spike accidentally knocks down part of a building when he punches a desk in frustration--the act of violence had a result that was completely unintended or predicted. Andy chose to see a meaning in Spike's act, saw it as a symbol in their fight, that had no real relation to the act itself. As a product of the postmodern future, Andy would never have understood the Teddy Bomber's intent. 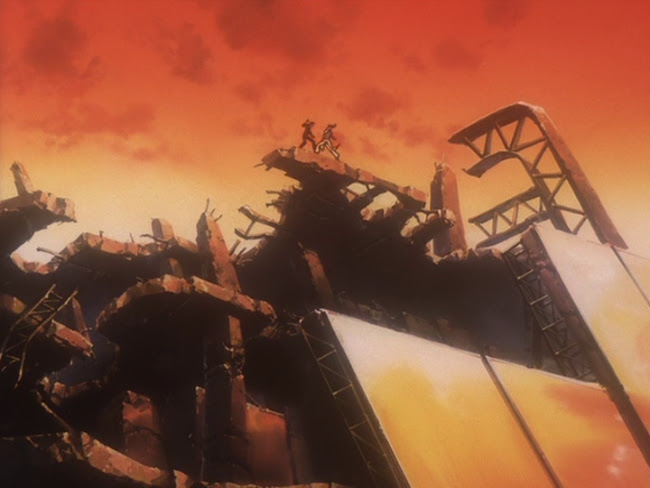 But Cowboy Bebop is a work of what I call "post-postmodernism", a term I apply to several anime series set in the future, particularly cyberpunk. It's a vision of a future where something organic has managed to grow on the infertile soil of postmodernism--the philosophy that can only eat other philosophies. Where Andy presents a shallow, insubstantial collection of symbols--mostly American where Andy himself is clearly not American (he peppers his speech with English words like it's a fetish)--Spike's identity and conception of self are built on real experiences and relationships. Andy's image is so shallow it's a marketing device--when Faye (Megumi Hayashibara) goes home with him, she brings back the next day a supply of Andy's "Son of a Gun Stew". Spike refuses to eat it because at this point in the episode he's losing focus. Jet, the least postmodern character in the group, sees only the practical aspect of it--it's free food, why not eat it? Ed (Aoi Tada), the most postmodern character, happily accepts it--she can accept the symbol without caring about what it does or doesn't mean. 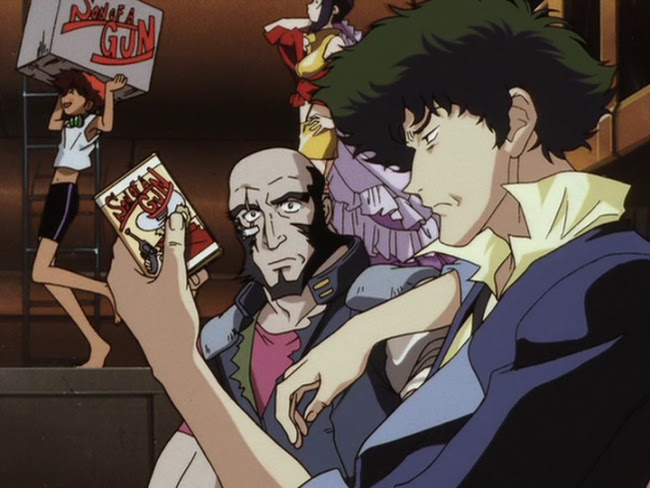 Spike remarks that Andy's time as a bounty hunter was just a rich boy's whim, which is probably true--and incidentally confirms the Teddy Bomber's thesis--while Spike has become who he is partly by necessity. Spike has to eat, Spike has to build real relationships with people where he and the other party agree on the same meaning for symbols. Spike lives in a shared dream, he's not a subversion of it or a parody of it.

Posted by Setsuled at 11:24 AM
Email ThisBlogThis!Share to TwitterShare to FacebookShare to Pinterest
Labels: anime, cowboy bebop, television, tv show