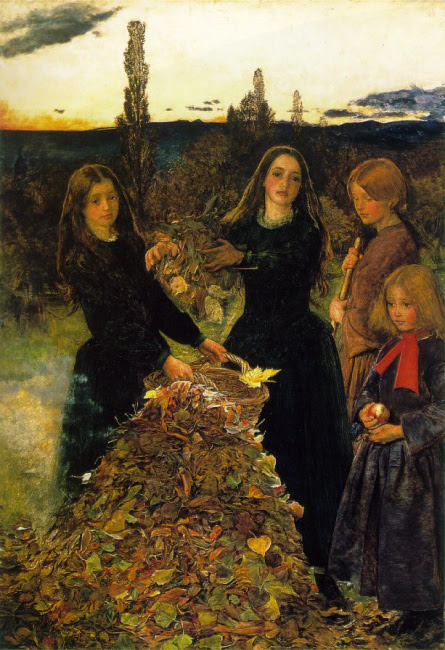 Yesterday I read the new Sirenia Digest which features a very autumnal new Caitlin R. Kiernan story, "Untitled 41". It very appropriately uses the above John Everett Millais image as its cover, the story being filled with descriptions of autumn leaves.

The story's unnamed narrator talks about her dislike of autumn reflecting her perception of it as a time of death, sentiments Caitlin has expressed as her own view in her blog. The story has more to do with death than that, though in ways that aren't quite explicit until the end. Most of the story consists of a dialogue between two people one gets the impression has been compulsively returned to again and again for a very long time. There's also talk of a house in the story and a reference is made to James Whale's The Old Dark House, a movie I only saw as recently as January of this year. The significance of something being symbolic of potentially many things is brought up more than once, which gave me a sense of a frustrated uncertainty keeping the characters from moving forward, pairing well with the static image of a possibly haunted house. I was also reminded of listening to Led Zeppelin's "Stairway to Heaven" recently.

The only birds in "Untitled 41" are crows, though. But this contributes wonderfully to the autumn atmosphere which I enjoyed despite Caitlin's stated dislike for the season.