The Dream of an Itch 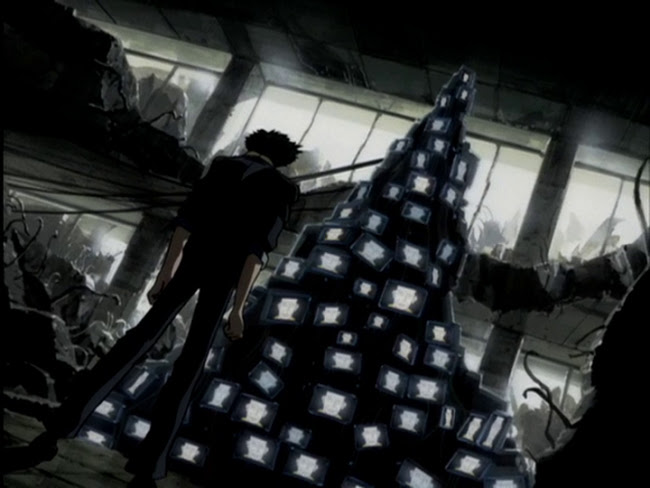 Following an episode that parodied itself as a television series, Cowboy Bebop brings us a more sinister story about television as a medium and the dangers of media in general. Owing a considerable debt to David Cronenberg's Videodrome, this story nonetheless is a crucial point in the overall narrative of the series and its particular statement on art and culture. 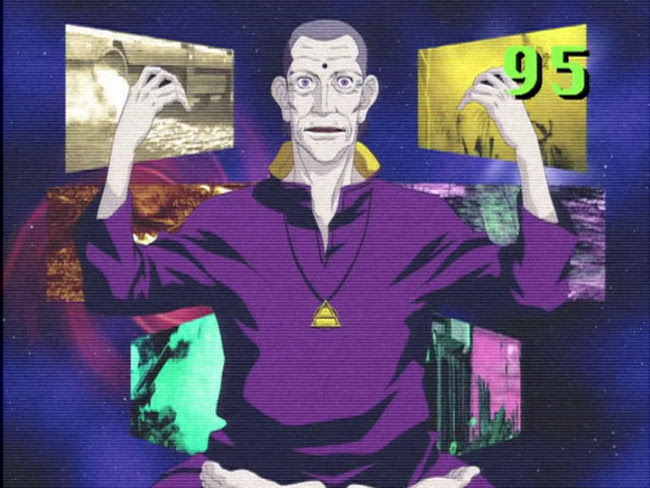 The episode begins with television. We're introduced to Londes (Chikao Ohtsuka), the leader of a cult, "Scratch", via a television being watched aboard the Bebop by Spike (Koichi Yamadera). Londes, with his hypnotic, unblinking stare, promises freedom and purity to the viewer in contrast to the ugliness of the physical body. "What is the body?" he asks. "The body is a mere physical object. It is an existence all too impure to store the gods within us called souls." 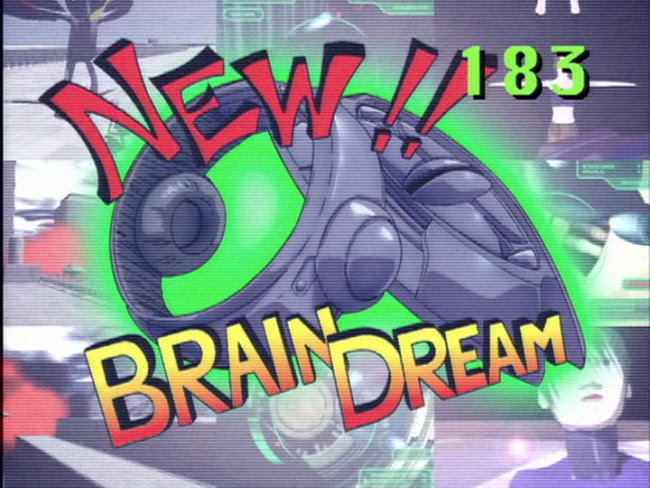 He condemns the entirety of human history and asserts there is no future. He advocates a reality divorced from the physical plane and also exhorts the viewer to abandon all other religions which he recognises as illusion. He's another very potent manifestation of the postmodern--he advocates an existence entirely within media. As we find out by the end of the episode, the concept has a lot in common with Videodrome, David Cronenberg's 1983 Science Fiction film about a professor named Brian O'Blivion, his idea that television has become the essential concourse of human consciousness, and the shadowy political entities that exploit this pathway in the human mind to provoke manipulative hallucinations, eventually using a VR helmet to create assassins. Cronenberg was influenced in part by the writings of Marshall McLuhan. 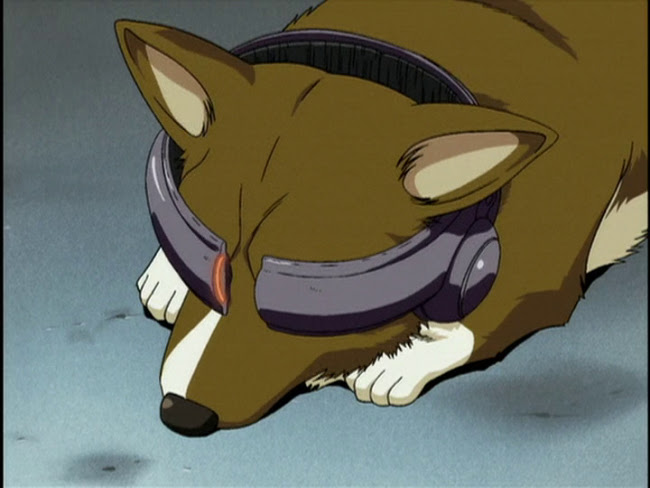 The hero of "Brain Scratch" turns out to be Ein, the dog, who's able to hack into the cult's VR software much faster than Ed (Aoi Tada). This is because Ein, as established back in episode two, is the product of an experiment and is secretly a genius but the fact that it's Ein who cracks Scratch seems more significant because, as an animal, the dog is the perfect opposite of Londes' philosophy. Even more than Jet (Unsho Ishizuka) Ein's nature is defined by physical reality and his pack. Londes, who turns out to be a kid in a coma, selfishly hopes to draw other people into his static world. 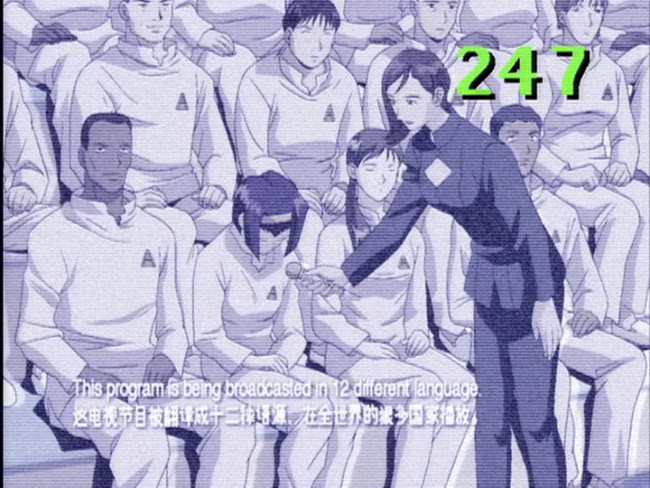 He defeats Faye (Megumi Hayashibara) who'd infiltrated his group and he's about to render Spike helpless, too, before Edward and Jet stop him at the source. Jet and Edward don't have a chance to reveal to Spike what they learned about Londes but Spike has his number anyway--he intuits the cult leader is a kid, and says so, which pisses Londes off. Of course it would--it's not just a reminder of Londes' physical reality, it's a sign that his physical nature can be recognised by an observer without his intent. Internet trolls glory in their anonymity, nothing irritates them more than being pegged. 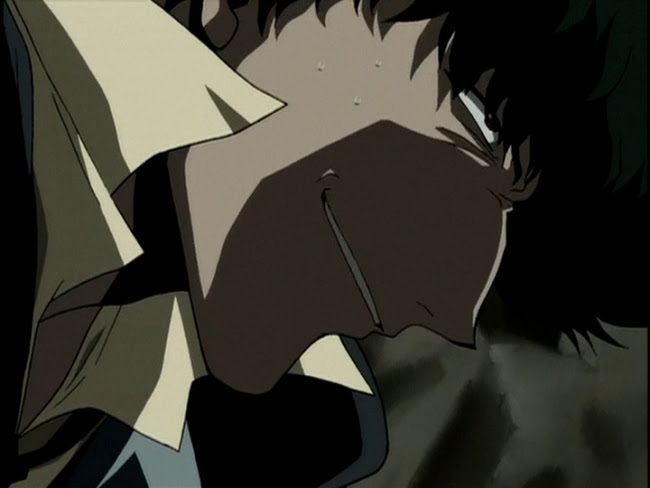 Spike goes further, once again invoking the concept of a dream that recurs with him throughout the series. "If you want to dream," Spike says to Londes, "dream alone." After Londes has given a speech about how people are controlled by television, no longer able to tell fantasy from reality, Spike rightly observes this is more true of Londes than for anyone else and whatever Londes says its not freedom from the physical body that he glories in but the feeling of dominating other people. 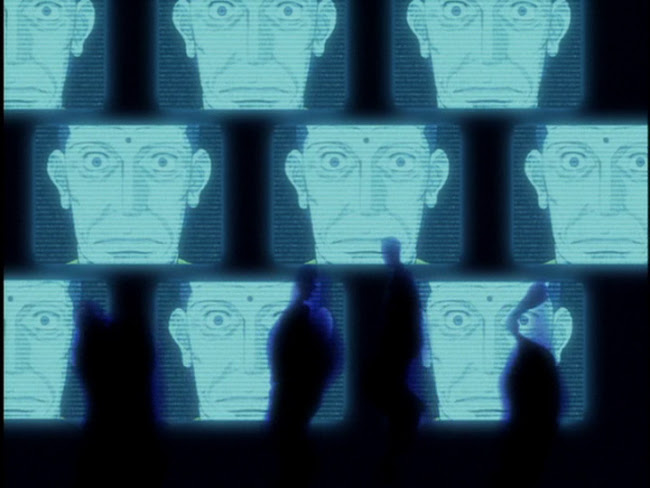 This explains the subtle contrast presented between Londes and Edward. They're both kids, they're both representatives of the postmodern, but Edward is more perfectly detached. When she poses as Jet's daughter, she calls him "Papa" as naturally as she greets her real father in the next episode--in fact, more naturally, as I'll go into further when I talk about Session Twenty-Four. She gives one last look to Londes' hospital room as she and Jet walk away, wishing him better dreams, perhaps hoping he finds the serenity she was born with. 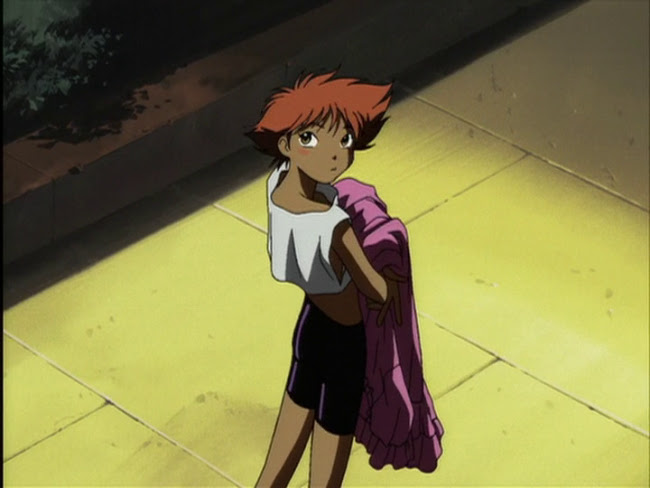 There's an amusing scene in this episode where Spike and Edward are eating while Jet is busy with the computer. Edward pours milk on her bowl of beans, unhesitatingly reconfiguring ingredients outside tradition and seems unperturbed by the result. Spike, following her example, pours beer his meal but when he tastes it he finds it disgusting. But he has to finish it anyway because, after all, he's hungry and it's still food. He needs it. 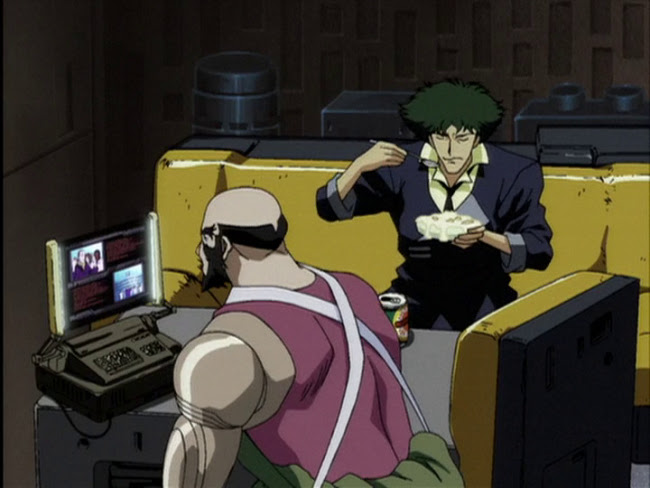