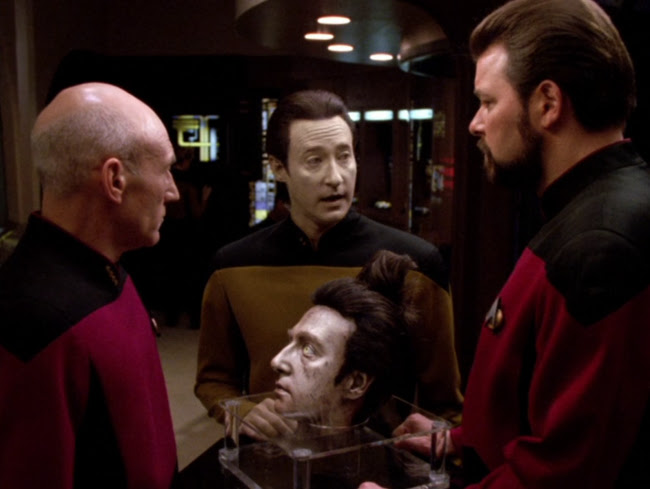 Ah, vintage android heads. In the 1992 Star Trek: The Next Generation two parter, "Time's Arrow", the crew are shocked to learn Data's head has been found in a cavern on Earth, having been there about five hundred years. This kicks off a time travel story at turns eerie, amusing, and mediocre. 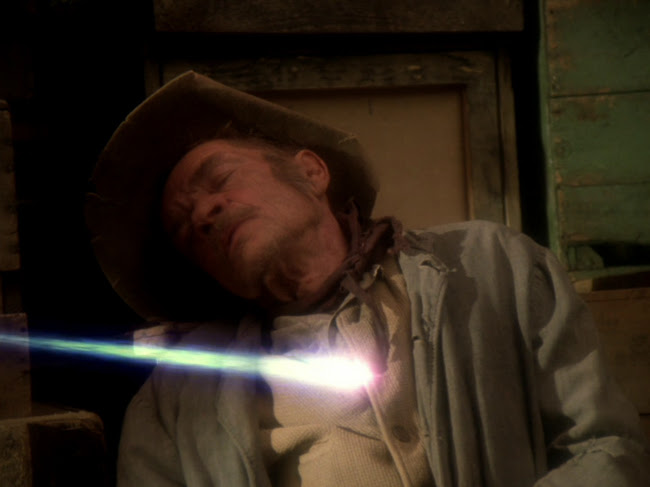 It ends up being connected to a planet light years away where creepy aliens with holes in their foreheads are feeding off the energy of 19th century humans. The first episode of this two parter, with a teleplay from Joe Menosky and Michael Piller (based on Menosky's story), is the stronger of the two and features a nicely creepy scene where Data (Brent Spiner) wanders the cavern, invisible to the rest of the crew, and confirms Troi's (Marina Sirtis) sense that there are hidden beings in the place as he describes the bizarre aliens. The puzzle's not over, though, because Troi had said she'd sensed frightened humans and Data's not seeing any humans. 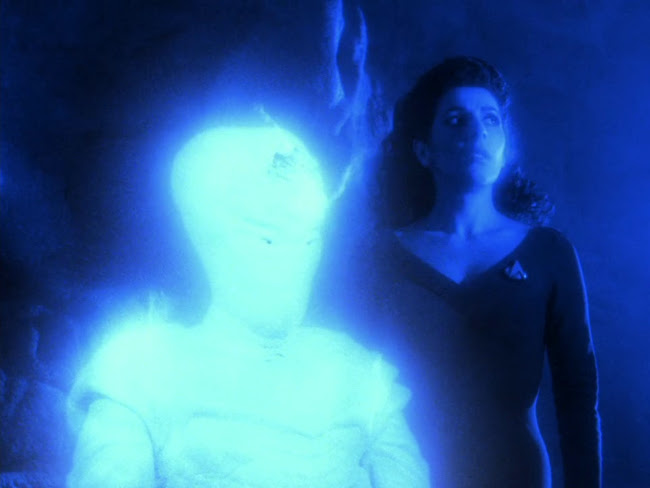 The scene feels a little like the spirits of shoggoths have invaded a seance and it's nice. Things get less creepy when we see the aliens and their deadly snake hand puppet. 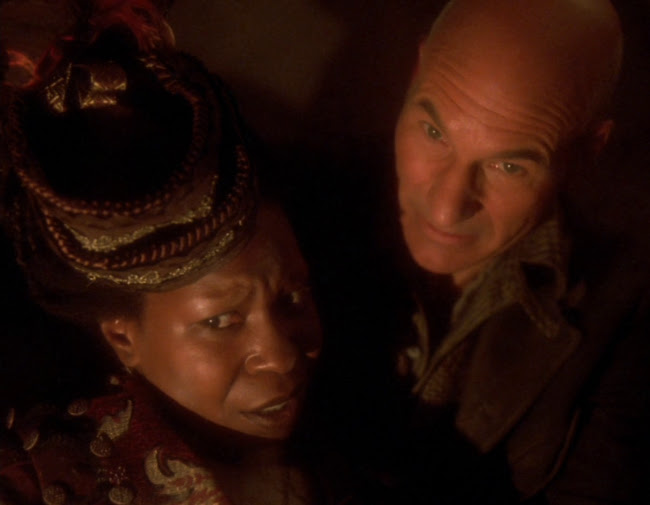 There's also a subplot about Picard (Patrick Stewart) and Guinan (Whoopi Goldberg) and we see how he met her in the past after knowing her for years and then she met him before he knew her. It's not unlike the Doctor and River Song on Doctor Who. It's a nice way of explaining the mysterious references Guinan made to her past with Picard in previous episodes. Sadly, this plot is dragged down by a really cheesy appearance by Mark Twain (Jerry Hardin). 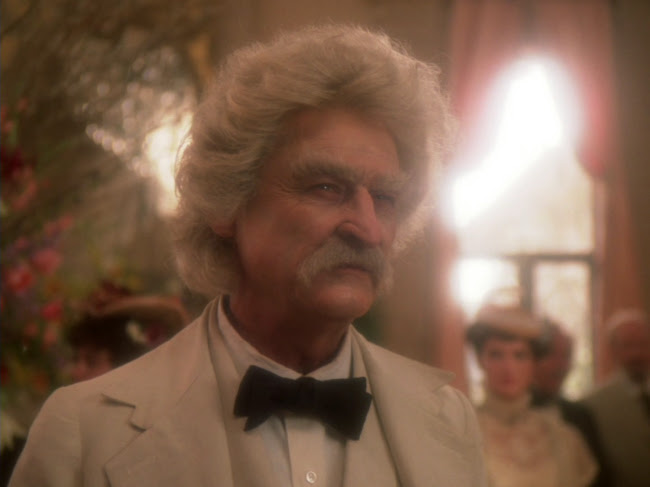 Naturally he ends up on board the Enterprise where Troi, who seems charmed by him, gives him a tour. He seems astounded when she informs him the world no longer has poverty and corruption--it's kind of ironic that Deep Space Nine's pilot was filmed at the same time as "Time's Arrow" because Deep Space Nine would go on to in many ways dismantle Troi's, and Roddenberry's, rosy portrait of the future. Twain makes a point, saying that people who say they've overcome the perennial faults of human nature tend to be conquerors. He concedes the debate a little too easily to Troi, really. 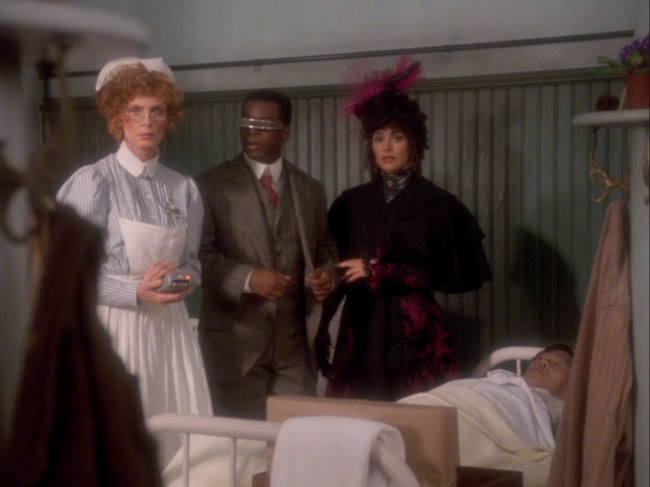 The teleplay for part two was written by Jeri Taylor, who wrote some fine episodes in addition to co-creating Voyager but this was definitely not one of her best works. This episode has a scene I suppose is infamous where, Picard having gotten stuck in the past, Riker (Jonathan Frakes) has called a conference to figure out how to get him back. Dr. Crusher (Gates McFadden) tells him she isn't sure she can modify the phasers to open a portal (clearly a job for the ship's medical doctor?) when Worf (Michael Dorn) says their priority is to obliterate the aliens in order to protect Earth. To which Troi, without hesitation, says, "He's right, Will." At this point, they know nothing about the aliens' motives. Yes, Mr. Clemens, no hypocrisy in this nice happy society . . .

The scene concludes with Riker telling Worf to arm photon torpedoes and . . . let him know when they're ready. Does Worf need to build them from scratch? I'm not impressed by your futuristic weaponry. Of course, it's all a stalling tactic by Taylor so that something can crop up to give Riker an excuse to rescue Picard. I've got to think there are better solutions than this. Maybe just a line about how the torpedoes need to be reconfigured for the peculiar atmosphere? 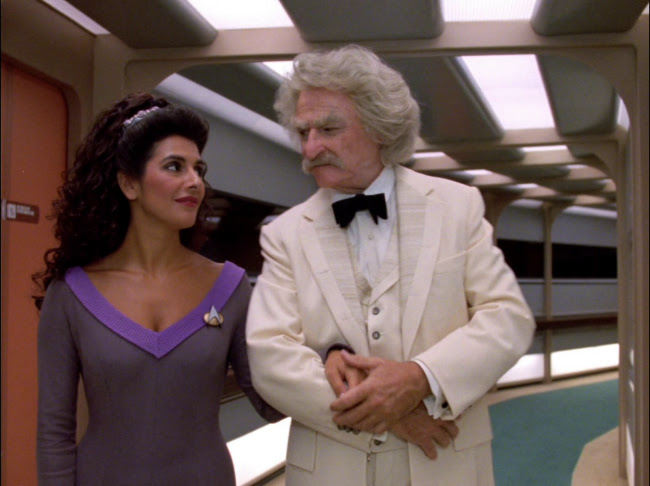 I've been slowly working my way through a re-watch of The Next Generation over the past four years. So far I'm confirmed in my memory that the series peaked in the third season and slowly went downhill afterwards.

A normal suit proceeds across the dust.
A shifting map portrays the shaken land.
A rainy cloud bequeaths to steel some rust.
It's only dice that fits a human hand.
Beneath a woven brim surprise observes.
A button box commands the darkened hold.
The faucet turned as kitchen thought conserves.
A common scam abused the fear of mould.
Strategic pins illume the toy at night.
A grain of salt accounts for fifty hills.
A telling take retold the tally right.
Accords agreed reduced the cloudy bills.
A dollar trio brave the penny house.
An honoured guest accepts the titled mouse.