Witches Tempt a One Time Wizard 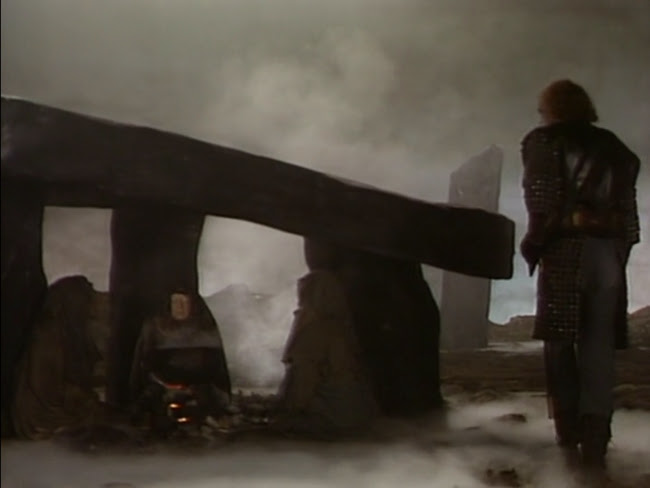 If you're in the mood for Shakespeare on Halloween, the obvious choice is Macbeth. And there's no shortage of screen adaptations; I like Orson Welles' version and Roman Polanski's. The best is probably the one with Ian McKellen and Judi Dench, and it is brilliantly performed, though I dislike the minimalist set and the 20th century clothes. I recently watched the 1983 production for the BBC Television Shakespeare featuring Nicol Williamson in the title role. Williamson is best known now for playing Merlin in John Boorman's Excalibur but he'd been a respected Shakespearean actor since the 60s. I wasn't really pleased with this version of Macbeth at first; it seemed a little flat to me, particularly in Jane Lapotaire's performance as Lady Macbeth which comes off as a simplistic Disney villain. But I warmed to the production as it went on and it seemed to me a version particularly suited for Halloween. 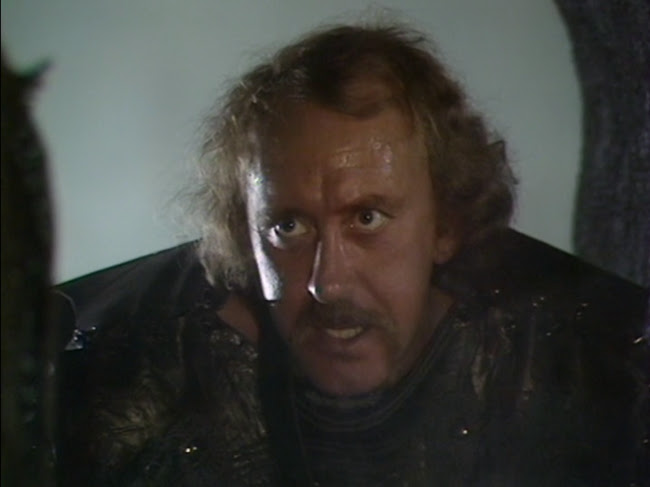 Good things of day begin to droop and drowse,
Whiles night’s black agents to their preys do rouse.

Williamson was an actor whose genius was in the creative vocal choices he made in delivering his lines. Shifting from deep and full to thin and almost raspy he played his vocal chords like a piano, finding weird and, at the best of times, evocative choices for the text. At first he seemed oddly subdued in this production but his performance picks up a lot after the murder of the King, as though he made a choice that it was in this act that Macbeth first comes to life. 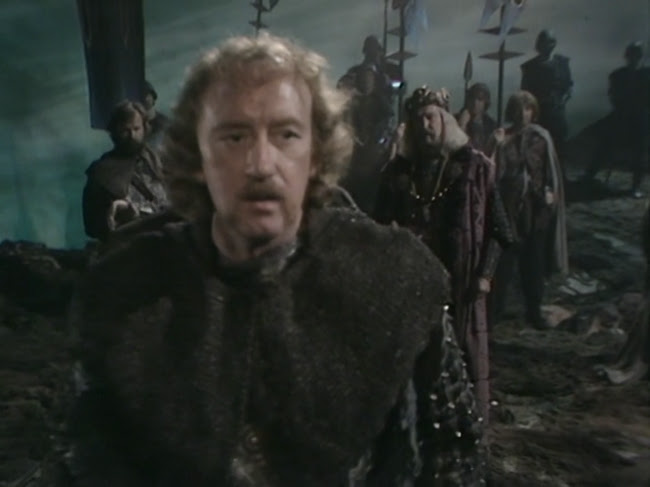 He shifts from quick and perfunctory to broodingly slow and desperate in the middle of lines. His "to-morrow and to-morrow and to-morrow" starts casual, like he would sprint past the news of Lady Macbeth and then becomes fearfully aware of the impact it's having on him as it relates to his future.

It seems like a lot of productions want to go for minimalism. It fits with the psychological position of Macbeth and his wife as their lives seem to become more and more narrowly defined by the witches' prophecy until Macbeth's soliloquies seem largely devoted to parsing their words, even before he realises they're treacherous. 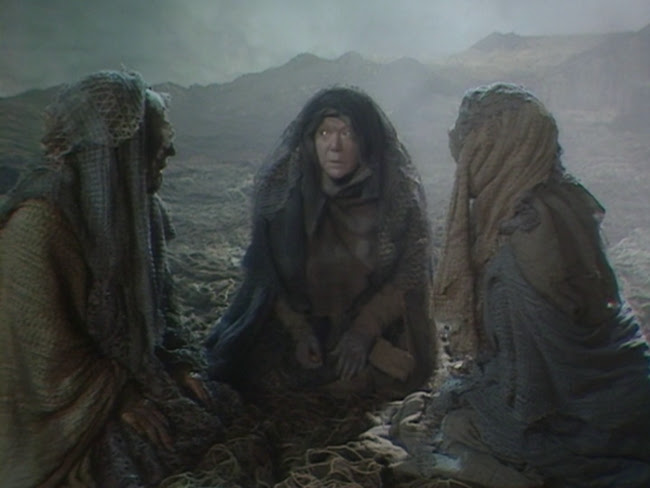 As it looks like we'll be seeing in an upcoming episode of Doctor Who, James I, Shakespeare's sovereign at the time Macbeth premièred, had a particular preoccupation with witches. Shakespeare ably provides a stark example of just why one shouldn't cast their lot entirely with even fair sounding prophecy, though it's worth noting the witches never tell Macbeth to kill anyone. 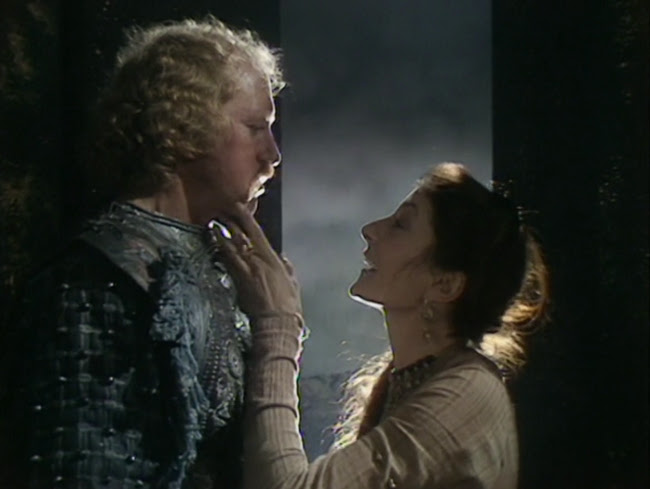 The horror presented in this production has a mildly saturated, painted feel, like a Hammer film, particularly with the indoor set and fog. In this context, a simplistically villainous Lady Macbeth starts to make sense. But Shakespeare has insight into very real horror in this play which inevitably confronts the viewer in Lady Macduff's only scene, played oddly cool by Jill Baker in this production. The horrible weight of truth is still in her lines after she's been warned to flee because men are coming to murder her and her child.

Whither should I fly?
I have done no harm. But I remember now
I am in this earthly world, where, to do harm
Is often laudable, to do good sometime
Accounted dangerous folly; why then, alas!
Do I put up that womanly defence,
To say I have done no harm? 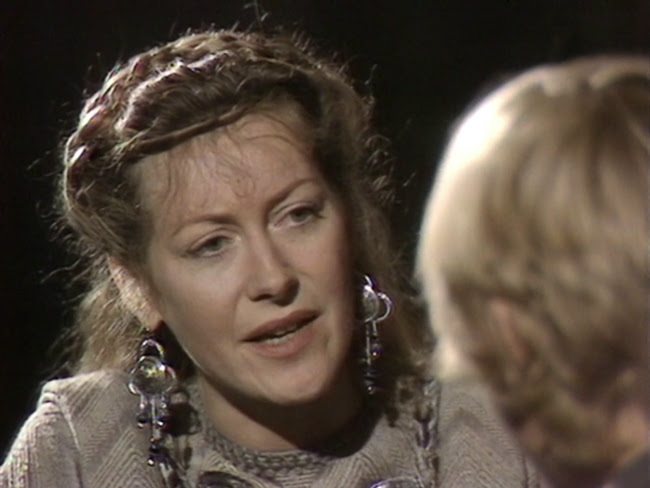 The 1983 production isn't especially minimalist for most of its run time, featuring an impressive 360 degree backdrop indoor set with painted clouds, but the last portion of the play pares things off oddly so Macbeth has his duels with Young Siward and Macduff in complete isolation. Disappointingly, we never see any trees or even branches so when Malcolm tells his allies, "your leafy screens throw down," everyone's awkwardly already empty handed. I don't know why they couldn't at least have some simple branches. Otherwise, this is a really nice looking production and Williamson is magnetic. 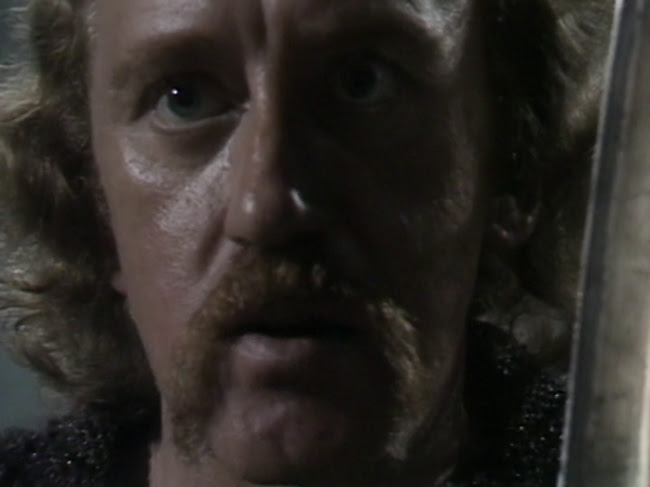