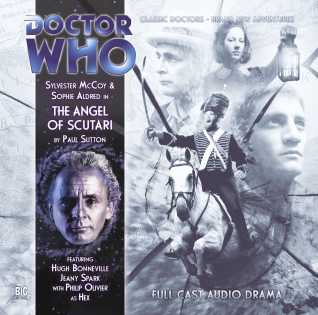 It's a proper adventure when both Florence Nightingale and Leo Tolstoy are involved. And it's the 2009 Doctor Who audio play The Angel of Scutari in which the Seventh Doctor and his companions are mistaken for spies. A complicated spy story of mistaken identity is amusingly layered over a complicated time loop story, the performances of the leads helping greatly to give some heart to the shuffling sea shells of plot.

The Seventh Doctor (Sylvester McCoy) and his companions Ace (Sophie Aldred) and Hex (Philip Olivier) find themselves in the Crimea in 1854, the time and place where Hex's idol, Florence Nightingale (Jeany Spark), achieved immortal fame. Hex is a nurse from, if I remember correctly, slightly in our future. Florence Nightingale may have revolutionised nursing but it's not every nurse, or even many nurses, who'd fall to pieces over the idea of meeting her. It's a nicely subtle weirdness to Hex's character. But while he's busy tending the wounded on the British side, Ace ends up among the Russians in custody of a young soldier who is none other than Leo Tolstoy (John Albasiny). Which is fun, and becomes even more fun as he starts to fall for Ace, though the story never quite makes it clear why this character needed to be Tolstoy and not some other soldier. But maybe that might have made it too much like Ace flirting with the Soviet officer in Curse of Fenric.

And if the show hasn't dropped enough names, the Doctor ends up meeting Tzar Nicholas I (Hugh Bonneville). Something about the Doctor demands the Tzar's personal attention.

The Doctor is startled to find people on the British side recognise him from earlier events he hasn't experienced yet--and because of them he's taken to be a spy--so he's obliged to go back in time to make sure everyone's stories are straight so as not to disrupt the timeline. It's an effective story but for my money the best of this kind is still the Seventh Doctor audio play Flip-Flop which is actually two stories that can be listened to in any order because of the complexity of its time loop plot.