The Baubles and Dreams

Shadows aren't tangible and neither is time and yet both have been a subject of preoccupation for humanity. In Shirley Jackson's 1958 novel The Sundial, members of a wealthy family and their close associates find themselves obsessed with validation through the intangible and the abstract even as these things give the characters warning of a very concrete apocalypse. It's a terrifically funny novel and I mean that literally--there's brilliant terror in how funny it is. 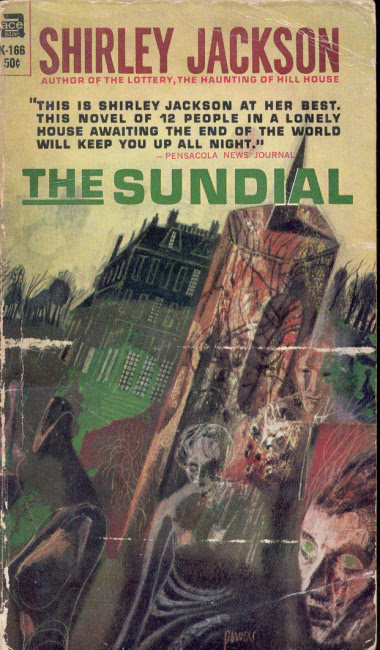 This cover's blurb makes it sound like every minute spent reading the novel is a minute spent in an endlessly traumatic nightmare. But for the most part, the book is a charming depiction of some very credibly loopy people. The novel begins after the funeral of Lionel Halloran, the last competant male heir to the great Halloran estate, a big house on an enormous property surrounded by a wall. The property goes to Mrs. Orianna Halloran, Lionel's mother, who married into the family via Richard Halloran who has extreme dementia and is confined to a wheelchair. He and his sister, referred to as Aunt Fanny for most of the book, are the children of the original patriarch, Mr. Halloran, who ordered the building of the large house and wall. There's a nearby village whose inhabitants were forbidden from visiting the house even as the Halloran children were brought up to have a symbiotic, if emotionally distant, relationship with them. The original Mr. Halloran's idea seems to have been to create something like a mediaeval village overseen by a manor house and its resident bailiff or baron.

The novel features several characters confined together for most of the book but if there's a central conflict in the novel it might be between Orianna and Aunt Fanny. Through thinly veiled dialogue, the two older ladies (Aunt Fanny insists she's only 48) sling barbs at each other from the beginning. Orianna becomes increasingly obsessed with her importance as the legal owner of the estate while Aunt Fanny resents the empowerment of someone she still regards as an outsider. Orianna makes some condescending arrangements for the family and servants and Aunt Fanny doesn't seem to have a leg to stand on until she has a vision of her father, warning her of the end of the world but promising that all who remain in the house will be spared to become the population of a new world.

From this point forward, Aunt Fanny becomes custodian and authority of the spiritual ancestry and essence of the house while Orianna adopts the role of legal ruler.

The Wikipedia entry says there's ambiguity about whether or not the world's really ending in the book, that people have long considered it to be ambiguous, but it's really not. Aunt Fanny's predictions, and those of Gloria, a teenage family member who sees the future in a mirror, are confirmed again and again throughout the book. Readers may consider the reality ambiguous because the original vision seems so conveniently timed to boost Aunt Fanny's importance in the family just as Orianna is poised to completely take over. But this is what's funny and terrifying; nearly everyone in the novel, including Aunt Fanny, is completely obsessed with herself and slightly delusional, and yet the vision is quite true all at the same time. Intangible yet real and important, like shadows on a sundial.

The news reports of catastrophic weather referred to or the floods and breaking statues could be put down to an unreliable narrator, the kind that makes Jackson's We Have Always Lived in the Castle so wonderful. But The Sundial is third person, shifting from the points of view of different characters all the time.

Among the references to other works of fiction, the two most striking that repeat throughout the book are to Robinson Crusoe and Alice's Adventures in Wonderland. The protagonist of Robinson Crusoe going subtly mad alone on his island has obvious relevance as the strange family make preparations for an apocalypse only they believe in. The fantastic proportions of the property juxtaposed with the mental instability of its inhabitants suggests one was a great influence on the other. As the novel progresses, even as the reality of the apocalypse becomes clearer, the introverted madness of the characters seems to become more overt, until Orianna herself compares herself to the Queen of Hearts in Alice in Wonderland. But Orianna's gown and crown are gold. She makes rules for everyone to strictly adhere to in the dawning of the new world, including the importance of ignoring the old calendar and starting from the beginning with the First Day. It's easy to laugh at Orianna's crown or Gloria's assertion that she should force her way into the house even if she wasn't expected but the book doesn't allow the reader perfect distance from them--with the world actually ending, we're inside their reality even as the very bedrock of that reality is in question in the conflict between the two women for the Queenship. Confrontations between the characters are tremendously important even as they're undermined by little reminders of the faultiness of the participates. One of the climactic conversations ends abruptly with one character telling the other that there's not room for her to get by in the doorway to do what the other instructed, something of which the other had seemingly been absent-mindedly unaware.

The novel does have some genuinely effective thriller scenes, one of my favourites being the circumstances of Aunt Fanny's first vision where the older lady is walking the grounds with the ten year old Fancy, the youngest inhabitant of the Halloran house. The vision seems immediately like a hallucination suffered by Fanny when Fancy won't corroborate parts of this story but in a small paragraph between breaks Jackson immediately informs us that Fancy is a liar. Even the youngest is attempting to assert her own version of reality.

The Wikipedia mentions how Jackson was surprised when some interpreted the novel as being about a conflict between Catholicism and Protestantism. A nice aspect of the book is how readily its conflicts can be applied to different interpretations. It certainly seems to relate to how people may want to be ruled, how people may need to rule to have self worth, and the dubious reality in any sense of attaining either of these needs.