The Dumbest Hero in Space 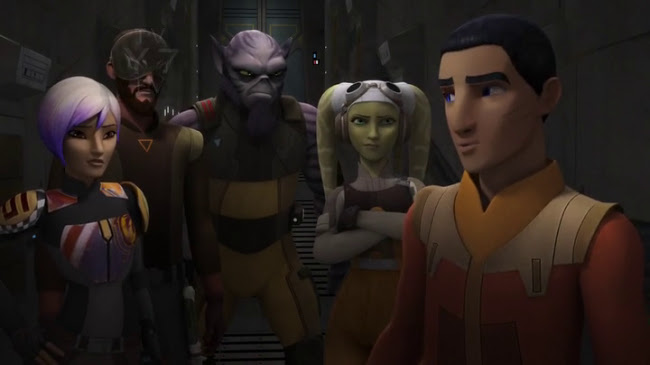 Saturday's new Star Wars: Rebels began with this appropriate group wince. Though it wasn't a bad episode. The second to be written by Gary Whitta, it's not as good as his TIE Fighter homage, "The Antilles Extraction", but it's a nice heist story, particularly since it takes multiple opportunities to show how stupid Ezra is. 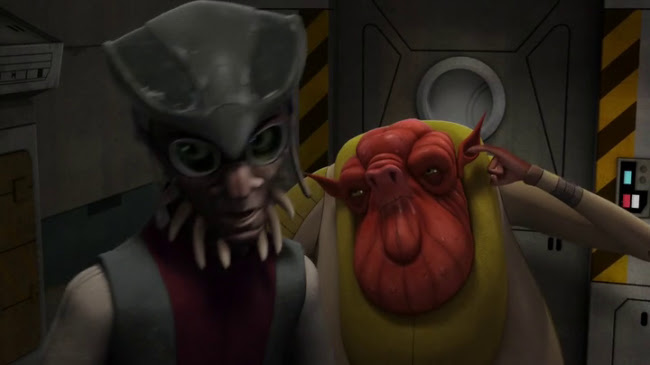 It's time to check in with another Clone Wars character in an effort to keep fans watching so last week saw the return of Hondo, the pirate who occasionally worked with Anakin and Obi-wan and is now an occasional ally of the Ghost crew in this tiny, tiny galaxy. This time he brought along Azmorigan, an egg shaped former crime lord from season one of Rebels. The show is finally able to cannibalise itself. 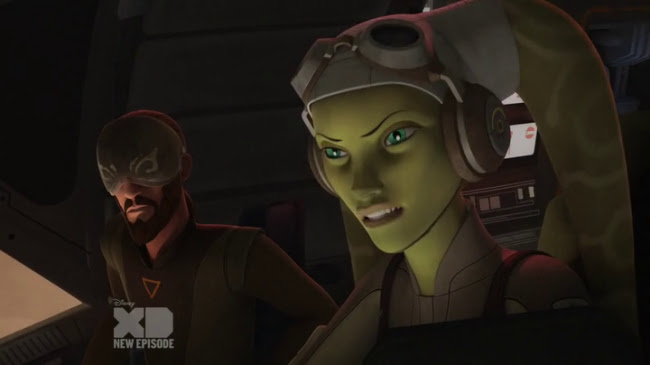 Ezra convinces the group to cooperate with the two criminals on a dangerous salvage operation of an Imperial cargo ship. Because he's a complete moron, Ezra trusts Hondo--because Hera's not a complete moron, she puts Zeb in charge of the mission. Though her experience has given her insight--when Ezra tells her to take it easy, she replies, "Easy? This sack of bantha fodder tried to buy me from that slimo Calrissian and make me his servant." I don't think "servant" is the word you're looking for, Hera. Are they not allowed to say "slave" on Rebels? In any case, not only does this make Ezra seem stupid, it makes me think he's edging back toward the Dark Side. 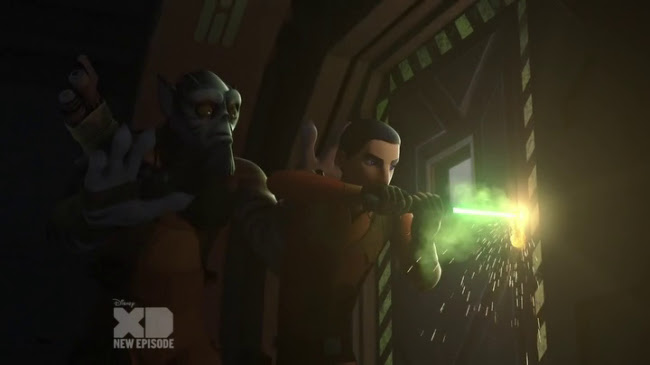 But mainly the takeaway from the episode is that Ezra is stupid. Like when he chose to burn open a door on the cargo ship with his lightsabre an instant before Chopper restored power and opened the door. I certainly sympathised with Zeb's frustration. Oh, if he could just clock that kid on the head and be done with it.

Hondo and Azmorigan squabbling was fun and there was a slight Treasure of Sierra Madre vibe to the episode.

Red ribbons held a giving world between.
The vaunted tables newly hacked're flat.
Tremendous douses killed the dullest sheen.
With questions eyes will seek the maddened cat.
Tobacco leads'll sort the painless farm.
In pipes protruding cross the fallow field.
No leaf or paper roll will come to harm.
The way the dust in piles thick was tilled.
The ransom fell to numbers in the night.
The independent burns of stars resume.
Some blinders robbed the pinning tail of sight.
The only worm in town'd sing "consume".
Obeying by-law rail brigs, ankles clonk.
A tonne reclaims torpedo drills for wonk.