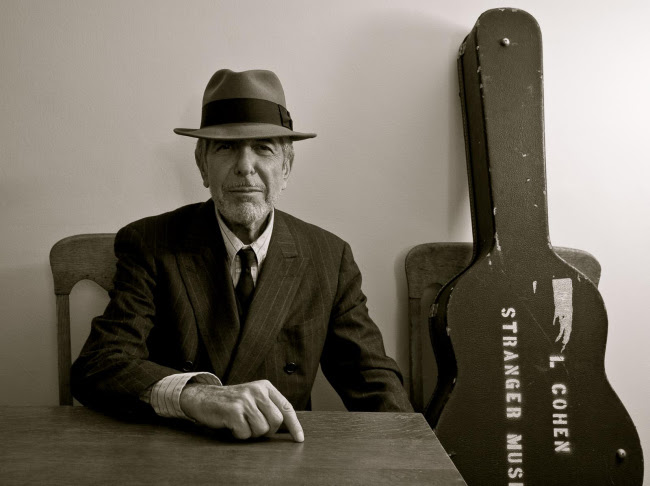 When I was in high school, I mostly listened to movie soundtracks. So I discovered Leonard Cohen through the Natural Born Killers soundtrack, a movie about America's obsession with tabloid celebrity turning into reverence for criminality. It's not a perfect movie but that idea certainly remains relevant.

Since then, I've gotten several Leonard Cohen albums and become a fan of this extraordinarily talented and prolific poet and musician who died a few days ago. From the gentle, plaintive melancholy of his earlier, folkish music to his later jazzier, stranger ruminations on sex, beauty, and slow burn despair.

I was surprised to learn he had such a long and established career before his voice became that striking, deep growl I first heard in Natural Born Killers. I knew "Famous Blue Raincoat" from the cover by Tori Amos--and, like Tom Waits, Cohen is a frequently covered artist whose songs sometimes become much better known through their covers.

There are a lot of ways Cohen is appropriate for these days after the U.S. election. Not only for the eloquence with which he expressed helplessness and sorrow but for his true and unwavering faith in beauty and (often physical) love. It is important to remember now how these two perspectives can coexist in one mind.

When I first began to realise Trump's win was going to happen late Tuesday night, early Wednesday morning, I think I shut down emotionally a little bit. The implications are so horrible they can't be taken in one moment or maybe even one day. Some internal mechanism has shut a valve and opens and closes as it cautiously lets one feeling in after another.

The clip I want to leave you with to-day has nothing to do with Leonard Cohen, but something I think of when I think about how to confront this kind of despair. This is from Akira Kurosawa's Ikiru:


Birthday Scene from Ikiru by setsuled

The smells of streets emerge from curtained plays.
A metal wheel is digging through the earth.
The buried temple holds our restless days.
A deal imposed on shades devalues worth.
A purple cord connects the moon to scars.
On every side, the sand is slipping souls.
Too quick, the thoughts resolve to hush the tars.
The deck is slick and hid by smoke from coals.
As plain as rings engraved on masts by blade.
As stars like slugs arrange the moving sky.
A copy sun removes the body's shade.
A horseshoe sets the terms our luck can try.
A bowl prevents the fish from swimming straight.
The vista turns a scalding, pressing hate.

Posted by Setsuled at 1:51 PM
Email ThisBlogThis!Share to TwitterShare to FacebookShare to Pinterest