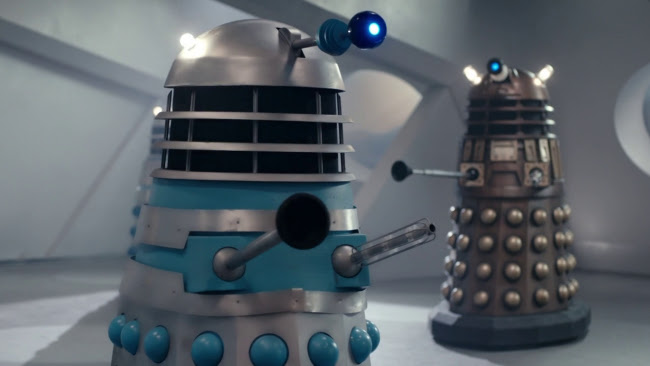 As we learned in last season's episode "The Witch's Familiar", the Daleks aren't on intimate terms with the concept of mercy. This was covered in the 2009 Seventh Doctor audio play Enemy of the Daleks, a nice Dalek story. Not among the best but far from the worst.

The Doctor (Sylvester McCoy) and his companions Ace (Sophie Aldred) and Hex (Philip Olivier) arrive on a world where a small research station is hosting a military force who were on the run from the Daleks. The station has a lab where a scientist named Toshio Shimura (Eiji Kusuhara) is developing something that will have far reaching consequences in this particular Dalek war. This is the first Japanese character I can remember on Doctor Who, television or audio (not counting spin-offs), and his name seems to be a reference to Takashi Shimura. The actor associated with some of Kurosawa's best films, I wonder if the reference here is actually to the character Shimura played in Ishiro Honda's Gojira/Godzilla.

This is one of those cases where the Doctor seems to know a lot more than he's letting on to the audience and his companions. He even tells his companions to stay in the TARDIS for once, though of course they don't. He tells them they've arrived at the time and place of one of the war's greatest atrocities and he can't prevent it.

The story deals with the nature of mercy and the potential benefits of granting it or withholding it. One scene has a formerly uncompromising military commander contemplate granting mercy to a wounded Dalek with the ironic fact that she doesn't know the Dalek actually wants to be killed. This is clever though it sidetracks the story a little from actually exploring mercy as a virtue in a substantial way. Though, anyway, this is ground thoroughly covered lately on the television series.