Negan is Always So Happy 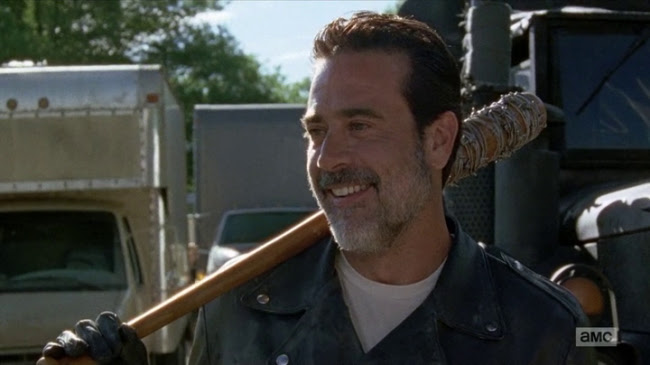 The story of the world's luckiest villain continued in last night's new episode of The Walking Dead. The episode relies on many improbable turns of events but is mostly dragged down by Jeffrey Dean Morgan's shit eating grin. Still, it's not hard to empathise now with the heroes having to deal with a despicable leader who's accepted and beloved by many (thousands?) for no apparent rational reason. The episode also gave Rick some genuinely credible psychological motives while undercutting the logic of the whole Negan storyline yet again. 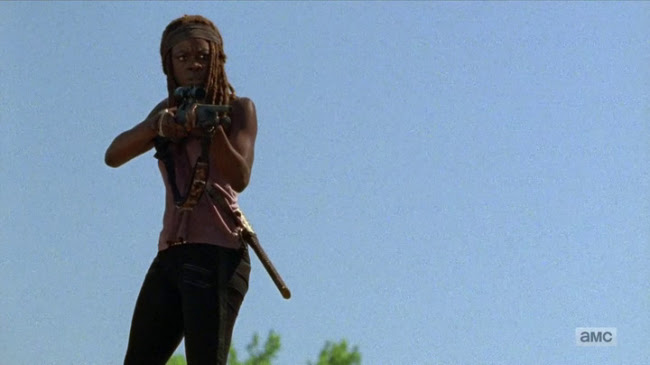 The episode begins with Michonne (Danai Gurira) sneaking out of bed to do some target practice which apparently she really needs judging from how many times she fails to hit that Walker. Maybe the idea is to show that she's really worked up though, really, there's no reason Michonne should be a crack shot, considering she was . . . was it a lawyer? You know, of all the characters I think it's Michonne whose former occupation is referenced the least. Well, not counting Negan (Jeffrey Dean Morgan). I wonder what he'll turn out to've been. Maybe a pizza delivery guy to make him a dark mirror of Glenn? 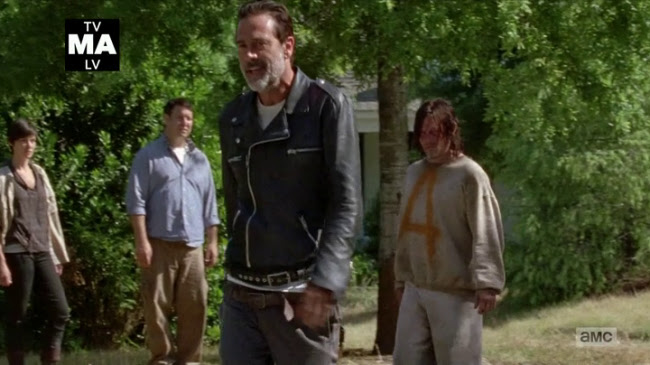 Strolling around unarmed amongst a bunch of people who'd like to see him dead before it occurs to him to take away all their guns, Negan also finally realises it's probably not a good idea to leave the widow, Maggie (Lauren Cohan), of the guy he murdered roaming free, spoiling for revenge. Luckily Gabriel (Seth Gilliam) has dug an empty grave and tells him Maggie's dead. This was apparently the only preparation anyone in town did for Negan's arrival. Negan has arrived earlier than the one week he promised he'd give them so maybe everyone figured they could sleep in. 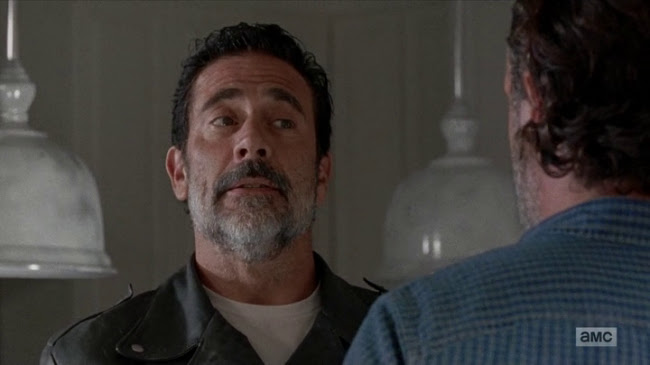 Although he asks about Maggie and he seems to be a real stickler for the gun inventory, he seems to have completely forgotten about Sasha (Sonequa Martin-Green). But why should he sweat the details when he doesn't seem to worry about anything else? 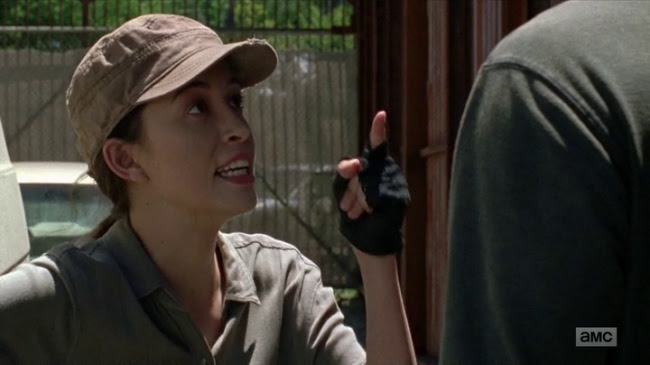 I'm not entirely sure why Rosita (Christian Serratos) bothered to come back to Alexandria unless it's loyalty to her friends. Mostly the episode focused on her deep hatred for Negan, something she shares with several other characters, none of whom set up with a sniper rifle in town to pick off Negan while he was busy swaggering outside the wall. Rick (Andrew Lincoln) seemed like he was concerned about the number of people Negan had but it looked like he came to Alexandria with only two carloads of people. I guess the people of Alexandria figure a deal's a deal? 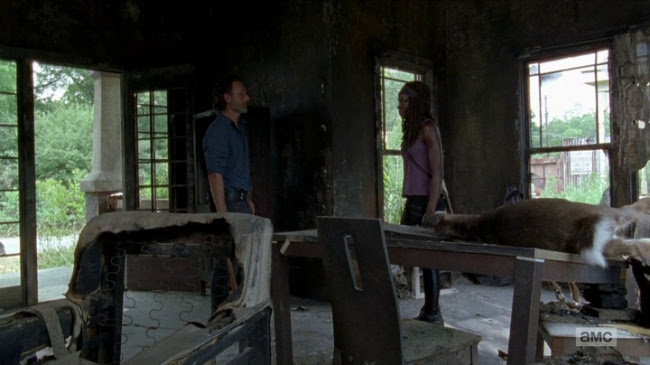 After Michonne for some reason gives away her position outside as Negan is leaving, Rick tells her about Shane and how he knows Shane is Judith's biological father. This is a nice moment because it explains why Rick is so focused on keeping the peace and it shows his noble nurturing instinct. And once again, Negan, who didn't know about Judith, lucked out because the implication seems to be that if it weren't for Judith Rick would be fighting Negan to the bitter end.

Although it would be nice to have a plausible villian, I will say that, combined with Dean Morgan's lousy performance, Negan's lucky streak is going to make it really satisfying to see him fall. In that sense, I guess I am invested in the story.

Disorder wears a system's veil for years.
The time in bread to mould advanced the curse.
A trade of turtle shells presents like tears.
In glass, the sorrow's change in smothered purse.
A termite's name erased from minds emerged.
Dissevered lists arrive on greying shores.
Horizon lines behind the clouds converged.
A million hands look like a pair of doors.
Defining spines reorder shelves of books.
A sudden ghost is drifting caught in glass.
In amber vintage strength is caught by looks.
In stone, the kings have warned us off the pass.
Refracted streams convey a runner froze.
To lakes beyond the falls the boatman rows.