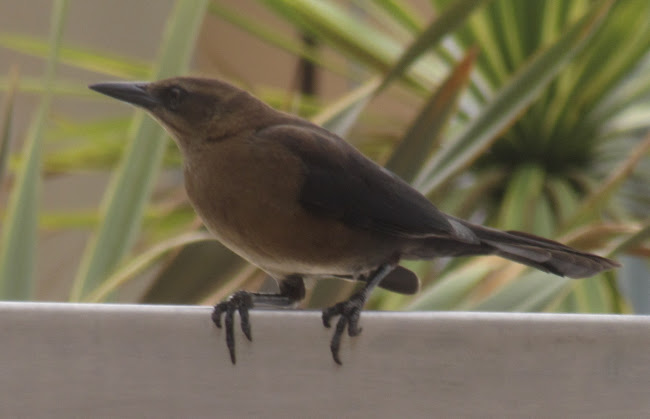 Fashion Valley shopping mall seems to've become the It spot for a variety of birds I don't know the names of. This fellow perched quite coolly on a chair by me last week while I was there for lunch. They're all over the food court all the time, the larger ones seem to live in the palm trees and I could hear one on a table getting responses to his calls from an unseen one in the palm fronds. 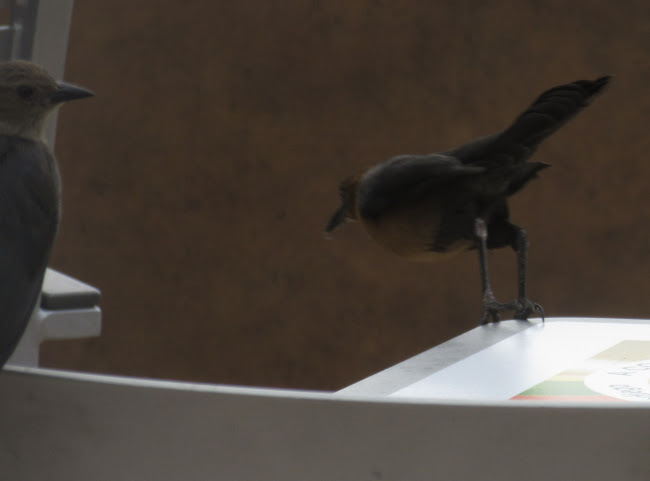 Not far away a few days before I saw a crow vainly trying to pick a fight with a hawk who just kept circling serenely. This is the best picture I got: I suppose it would've been better on a cloudy day for scale. We've been getting clouds here in San Diego now and then. One nice thing about Halloween is temperatures got down to 71 Fahrenheit. I was able to wear my black frock coat. Well, it was still a bit warm for it, maybe, but to-day we're back to summer weather, it was almost 90 on my way home from the trolley station. We San Diegans have to take what we can.

I got no trick or treaters on Monday so now I do got lots of miniature Snickers, Twixts, M&Ms and Kit Kats, all of which I'm happy about, but more than anything I have Starbursts which I was hoping to get rid of. It's not too late, by the way, if you want to trick or treat still, I'll make it worth your while to come to my apartment. At least if you like Starbursts.

The blackened shapes of trees can see a rook.
A ghost commits to mem'ry things he guards.
Collisions sound on pressured hulls to look.
A human soul consigned to numbered cards.
A straw unbent delivers Seven Up.
A caper culminates in callous crepes.
All the doughnuts melt into the cup.
The only song was caught between the tapes.
A foot declines a hansom cab for pies.
Absolved of salt a sample weakens coal.
No cape concerned the necks of sluggish guys.
In flight, the grace of gods begins to bowl.
Rectangular trees o'erlooked the pool.
The fish in squadrons never keep their cool.

Posted by Setsuled at 8:09 PM
Email ThisBlogThis!Share to TwitterShare to FacebookShare to Pinterest