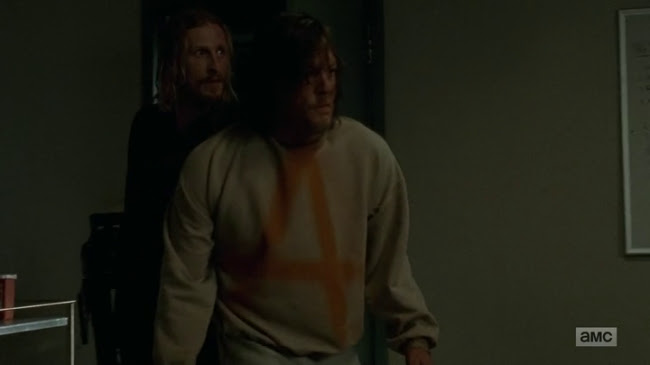 So on top of everything else, Daryl Dixon is an adulterer! On last night's new episode of The Walking Dead, Negan and his men sought to expose the sinful young man to be shamed by one and all by marking him with the symbol of his sinful deed! Well, not really, the A refers to something else, but last night's Walking Dead did feature Negan's attempt to humble Daryl through physical and psychological torture in another forty two minute episode with about as much story as would properly fill a twenty minute episode. It had its good points, but Negan becomes an even weaker character and plot device the more time we spend with him.

The episode begins with a pretty good looking sandwich. The montage showing how each ingredient was taken from people Negan's bullied into working for him was a nice way of showing the way the system works under him. 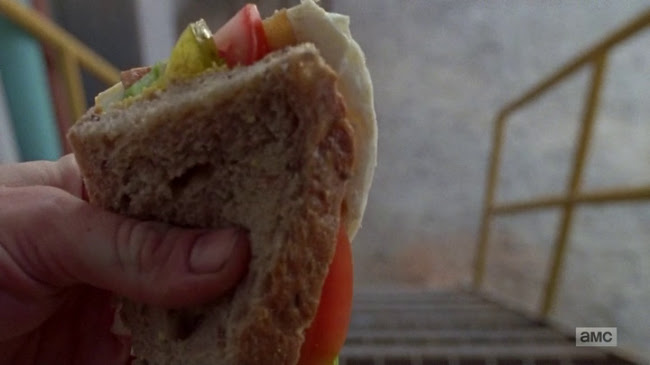 Still, it could use some cheese. Where are the cows, have they all become zombie food? Is everyone calcium deficient? How is Daryl maintaining his muscle mass? Well, I guess there are some questions we're not meant to ask. Like, why do people really seem to like Negan? 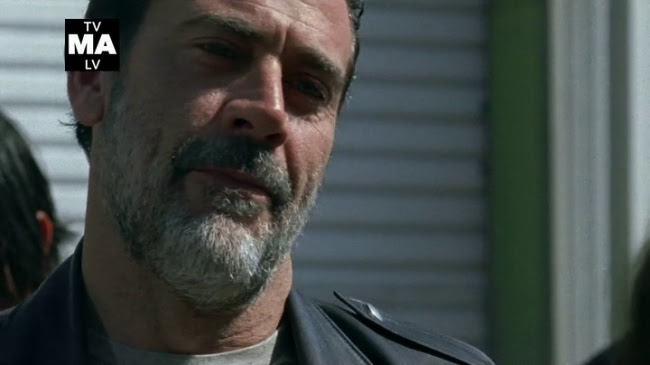 How has this swaggering asshole with a baseball bat not been shot by one of his own men? The episode reveals how Dwight has essentially been extorted into serving Negan but the show has yet to establish why other characters seem to worship him so much. It could simply be that Jeffrey Dean Morgan's charm is lost on me. I can't forget seeing him on the Watchmen panel at Comic Con and hearing him joke about the rape scene in that movie, but whatever kind of guy he may be in his personal life, I find his mugging and scenery chewing pretty broad and unimpressive. I suppose a parallel could be drawn to Donald Trump whose success also doesn't make much sense. I have to admit, though, despite the fact that Trump continually says stupid things, clearly has no idea how to do the job he's running for, and rashly sews hatred, he does have that plain speaking, common fellow appeal. That's how he gets away with blatantly lying constantly, how he can say he never called climate change a hoax and even though people instantly show evidence he did, no-one is swayed. Trump gives the impression of being this guy who pulls you into the back room of a casino to share this secret with just you about how he's rigged all the games. Negan's manner doesn't invite any kind of rapport. No-one seems to be friendly with him. This is one of the ways the Governor was actually a more effective villain. Though he went over the top before long, the show at least spent time early on to show how David Morrissey with his goofy Elvis Presley accent was a buddy patriarch.

Norman Reedus, though, proves again how much he can do with very little. The new episode more or less revolves around him and Dwight and yet Daryl says almost nothing, communicating much with his silence and facial expressions. Though I wished he'd started hallucinating like he did in season two and maybe we'd get a cameo by Michael Rooker taunting him as Merle. It's been too long since Daryl made a necklace of ears. 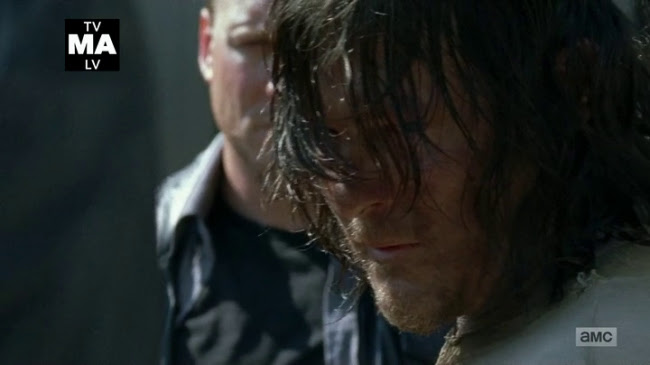 The cloying loud music Daryl's forced to listen to every day, the Roy Orbison song notwithstanding, gives a pretty good idea of how horrible it is to be in his place. Still, the episode doesn't quite stack up to the Star Trek: The Next Generation episode "Chain of Command" to show how a torturer might reorganise a victim's psychology.

Posted by Setsuled at 12:59 PM
Email ThisBlogThis!Share to TwitterShare to FacebookShare to Pinterest