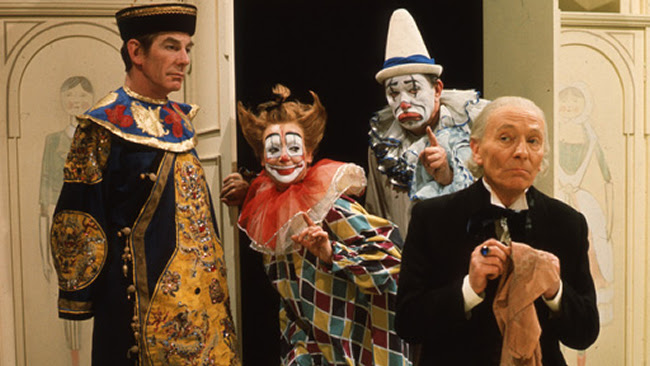 The First Doctor hinted he'd encounter the Celestial Toymaker again and, in his Seventh incarnation, he finally did, in the 2009 audio play The Magic Mousetrap. Unfortunately not played by Michael Gough, who'd retired from acting by that point, the Toymaker is instead played by David Bailie, but it is an entertaining story.

Of all the other incarnations of the Doctor, the Seventh (Sylvester McCoy) seems the most appropriate, the Doctor known for being the master game player who's always one step ahead of everyone else. Seven has been tied to chess more than once, most visibly in the television story The Curse of Fenric and so he encounters chess again, now in the Toymaker's realm. But the Doctor doesn't exactly remember who he is--I say doesn't exactly because he references having his memory wiped in other adventures and says he's used to it now.

His companions, Ace (Sophie Aldred) and Hex (Philip Olivier), are separated from the Doctor playing their own games, just like Steven and Dodo in the 1966 television serial. Ace and Hex haven't lost their memories and seem to be part of a plot, posing as different people in the Doctor's memory wiped life. They reference the fact that Seven is usually the one playing the overarching game and now the tables are turned. Well, they would be unwise to underestimate Seven even when he's not himself.

The story seems to be set in Sweden in the 20s in a sanatorium in which the Doctor is a patient. Sylvester McCoy is very funny in some dialogue where he expresses some confusion at calling himself "Doctor" and his doctor "Doctor". He feels his way through to his own identity by doing some funny impressions, for each one saying, "I don't think I'm the sort of person who says . . ."

Another patient in the asylum is Lola Luna (Joan Walker) who constantly makes references to Marlene Dietrich and even performs one of her Dietrich's songs at the end, doing a pretty fair rendition.

A wig approached a warg inclined to bald.
Responses strode against the blankest line.
A fire cooled by cracking cups can scald.
Endangered beverage peels the callow lime.
Tomato tanks partook in tactics red.
A planet crazed for summer heat's too much.
A fear affixed to wings is widely read.
A basket's picnic's not iron as such.
Reverse returns the smartly dress to Earth.
The caterpillar runway lights the way.
A cargo came forgotten, crucial berth.
A surplus wheel could ask but rarely say.
A mirrored chess redoubles bets in space.
There's many games with secret hex or ace.