The Doctor or the Monster 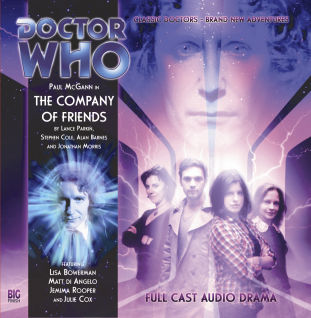 Continuing to listen through all the monthly releases of Big Finish's Doctor Who audio plays, I yesterday got to 2009's The Company of Friends, a four part anthology story, the first Eighth Doctor audio I've heard in a while, the first monthly one without Charley. Each written by a different writer, there's nothing terribly great or very bad in this collection, the most interesting story being the last one, where the Doctor meets Mary Shelley.

Played by Julie Cox, Mary Shelley encounters Eight (Paul McGann) during the famous vacation the real life Mary Shelley spent with her husband, Percy Shelley, and Lord Byron near Lake Geneva in 1816, the "year without a summer" as Mary puts it in the opening narration of the Doctor Who story. The uncommonly cold summer was due to the volcanic eruption of Mount Tambora as the Doctor ramblingly informs Mary. He turns up, seemingly mad and dying, before he turns up again in perfect health. So there's a timeloop involved, the injured Doctor having the memories of travelling with Mary for some time--and she becomes a companion of the younger Eight for audio plays set after this.

I feel like the audio plays had an increase in famous historical figures showing up corresponding with more showing up on the television show. It's something I wish the writers would avoid--any depiction is bound to be an interpretation of that person which makes the world of Doctor Who shrink a bit. Now the show is to some extent married to the embarrassing and already dated depiction of Shakespeare in "The Shakespeare Code", for instance.

This Mary Shelley feels slightly modern in ways that her mother being the great feminist writer Mary Wollstonecraft doesn't quite account for. She's surprisingly antipathetic to Percy Shelley who's played as kind of a bitter coward by Anthony Glennon. She complains that he doesn't take her on the adventures he promised, which gives her a motivation to travel with the Doctor, but one wonders what she expected from Percy if travelling to Switzerland or through war torn France wasn't good enough.

I look forward to hearing how different writers handle the character though I doubt she'll ever replace Elsa Lanchester in the role from the prologue to the 1935 Bride of Frankenstein. There wasn't much opportunity in this short audio story to get an impression of her chemistry with McGann's Doctor.

Posted by Setsuled at 1:10 PM
Email ThisBlogThis!Share to TwitterShare to FacebookShare to Pinterest