Cleaning Half the House 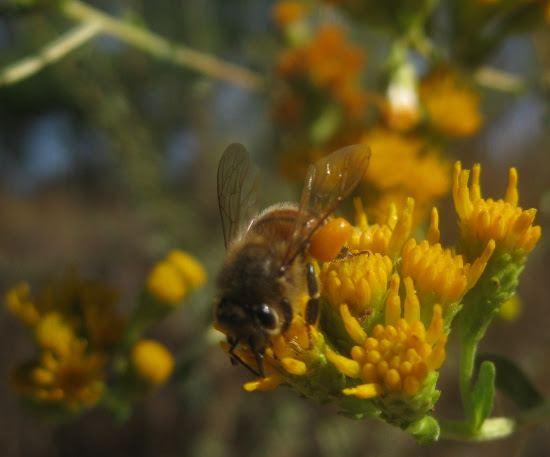 Plenty of pollen out there now so if you were thinking of just staying inside the hive, it's not the day for it.

I wanted to address a few things to-day. First of all, I know I've said this at least twice before, but I think it bears repeating--if you send something to my hotmail e-mail address, there's a very good chance I won't see it. This is why you see my yahoo address (setsuled at yahoo dot com) linked to everywhere instead. I still look at my hotmail because that's where my Live Journal notifications go, among other things. But last week when Tim sent something to my hotmail I thought for sure it hadn't gotten through until I realised hotmail hides its junk mail folder under a tab. So while I normally think I have no junk mail, I usually have around twenty items of junk mail, some of which are inevitably not junk mail, but hotmail deletes it after a day just the same. So if you've sent something to my hotmail and didn't receive a reply, don't take it personally. Just be sure to e-mail my yahoo address in the future.

I realised after yesterday's post that the previous Doctor Who episode written by Toby Whithouse, "Vampires of Venice", had also reminded me of Curse of Fenric for having aquatic alien vampires. I guess he really likes that serial?

I read Caitlin's first story and Sonya's poem in the latest Sirenia Digest. The story was more about its language than its plot, often the case with Digest stories these days. The fun is in ruminating on how bits of the dialect of the characters in the future setting evolved from our current English dialect. Sonya's poem wasn't bad, kind of default, though one could say eXistenz is sort of a default David Cronenberg film, and that doesn't mean it's bad.

I read the Digest kind of reluctantly this month, I admit. A mutual friend of Caitlin's and mine had posted about having done an H.P. Lovecraft parody years ago, and a short while after this post Caitlin had written a long rant in her blog about how Lovecraft parodies are always terrible and shouldn't be done. This had seemed rather pointlessly cruel to me for a lot of reasons--the mutual friend doesn't post very often anymore, and the post about the Lovecraft parody had seemed to me her attempt at drumming up confidence for herself to post more, or just trying to reflect on something positive she had accomplished. I thought about how much she seems to adore Caitlin and it all left a sour taste in my mouth. It occurred to me Caitlin's post was probably just a coincidence--it is the hazard of writing a blog of your not necessarily thought out opinions, I can certainly attest to, that you'll sooner or later hurt people's feelings without realising it. Caitlin's certainly not the sort to examine her vitriol before spewing it. She's been raging against electronic publishing for weeks while continuing to ask people to pay ten dollars for a pdf file of two or three short stories. Though I think most subscribers understand this money is really more like donations to make up for a career that really doesn't pay as much as it ought to. I'm sure if Caitlin didn't need the money she wouldn't ask for it.

I've always felt like the people who are often intentionally caustic are just the sorts who most need people not to give up on them. So I make an effort to take a broader, more complex view of things. It's not always easy, though, I have to say. Though I think it's easier than most people think.