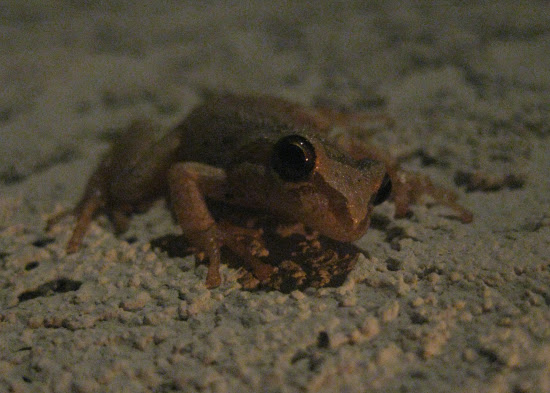 This tiny frog was waiting for me on the wall next to the front door when I got back from what seemed a particularly tiring night at school.

I was disgusted but not surprised to-day when I watched the video of the Tea Party crowd at the GOP debate cheering at the idea of letting someone die who doesn't have health insurance. One reason it didn't surprise me was that I'd heard the sentiment expressed in my history class yesterday.

It's a U.S. history class, and we've just gotten to the Industrial Revolution and are talking about rampant capitalism creating enormously powerful businessmen like Rockefeller, Vanderbilt, and Carnegie and how society began concocting the philosophy of Social Darwinism. This being a philosophy designed to make it seem good and natural that a small percentage of the country enjoyed great wealth while a far greater percentage lived in poverty and worked in hazardous conditions.

The teacher asked the class for opinions about how much of a role the government should play, and inevitably there were several guys who felt the government shouldn't help the poor at all, that everyone ought to pull themselves up with their own bootstraps or perish. "Maybe it's not fair," said one guy. "But life's not fair."

There were people who pointed out that, in America, not everyone has the same opportunities, some people have to put their dreams aside to take care of their families, some people grow up in areas with low quality education. But enough people were unabashedly putting forward the most brain dead, callous Tea Bagger arguments I finally had to speak up despite the fact that I hate class participation, particularly when it means arguing with people who are obviously immune to rational argument.

Hands went up all over the room and I received one angry counterargument after another; "Who's to say it's right to tax people to keep other people alive?" "In countries, like England, with socialised healthcare, there are long waiting lists and people die because of them." "People think the U.S. government was created to take care of them, but it wasn't at all."

And, of course, since these are all old arguments no-one with intelligence seriously puts forward in ideologically mixed company, I easily handled them all; "Who's to say anything's right? Who's to say it's right for people to die because others weren't taxed? Even assuming this would require increased taxes. As for England's healthcare, whatever problems they might have with waiting lists, their healthcare system is still ranked well above the U.S. healthcare system and people are healthier in England than in the U.S. And as for whether the U.S. government was created with universal healthcare in mind, that's simply not an argument. The Constitution has been amended many times. There's nothing wrong with changing the government if it means better serving the people."

After this, the only reply I got, and I think it was because the class was running out of time, was from a guy in the front row who, I swear, sounded exactly like Christian Bale in American Psycho; "The human race is, what, three thousand years old?"

The class laughed and the teacher replied a little dryly, "I think it's a little older than that."

But the guy completely missed the teacher's tone and seemed not to understand the class's laughter and said, "Whatever, it's something crazy long like that. And there wasn't government back then and the human race survived, so I think the human race will survive."

This is why I didn't want to participate to begin with. What does one say to something like that? I thought about, "I'm sure the guy dying of bubonic plague in the fourteenth century would be thoroughly comforted to know a percentage of the human race would certainly survive." It hardly seems constructive. But could I possibly keep from sounding sarcastic and condescending when I explained we might want to set the bar slightly higher than ensuring the survival of some humans?

Like I said, these were arguments no smart right winger tries to make anymore unless he's in a friendly environment like Rush Limbaugh's or Michael Savage's shows. The fact that these ideas proliferate, despite having been decisively repudiated, is maybe the scariest thing.

Ron Paul and Rick Perry both expressed disapproval for the cheers at the GOP debate, but these rich, comfortable guys are really far away from their ideological base, not really grasping the implications of much of what they say. Ron Paul vaguely suggested that the Church care for those who weren't covered by health insurance. And how exactly is the Church going to get funding for that, Paul? Taxes? 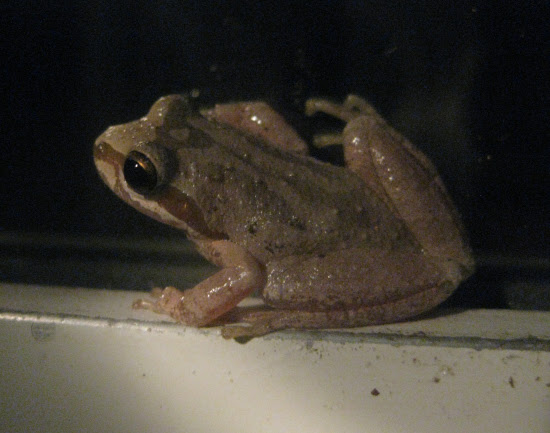 Posted by Setsuled at 5:26 PM
Email ThisBlogThis!Share to TwitterShare to FacebookShare to Pinterest