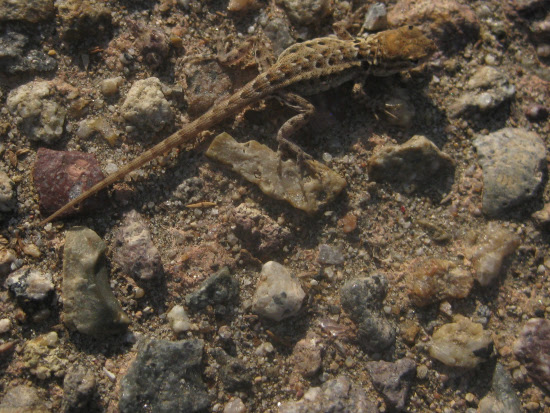 A very tiny baby lizard from a few days ago.

One of the things I watched last week but didn't have time to talk about was the 2008 production of King Lear with Ian McKellen as Lear. And McKellen was good, though somehow not the revelation he was as Macbeth. In fact, by far the best part of this King Lear was Sylvester McCoy as the Fool. He plays him almost exactly how he played the Doctor, and yet I like it. He even plays the spoons. I put him with John Hurt and Peter as my favourite Fools.

Which makes it all the more disappointing that this production chose to add a scene of the Fool being hanged to explain the often commented on unexplained disappearance of the Fool halfway through the play. I know Lear has a line near the end where he seems to refer to the Fool's hanging, but in this case I prefer to think of the Fool actually slipping off at some point to a blue police box.

The actresses playing Goneril and Regan were good. Romola Garai as Cordelia chose to portray her as more reckless and brash than other interpretations I've seen, which made sense to me--just because she has better character than Goneril and Regan doesn't mean she's perfect. Philip Winchester as Edmund was maybe the biggest disappointment, portraying him as a two dimensional villain, though the crap lighting runs a close second in terms of disappointment. I had to squint to see some of these performances.

Winchester's an American actor, I see, though he chose to use an English accent despite the costumes suggesting the play has been moved to nineteenth century Russia. Which says . . . well, nothing, as usual when Shakespeare productions do this sort of thing. And in this case nothing really did come from nothing. Which reminds me of one of my favourite Onion articles; "Unconventional Director Sets Shakespeare Play In Time, Place Shakespeare Intended".
Posted by Setsuled at 1:59 PM
Email ThisBlogThis!Share to TwitterShare to FacebookShare to Pinterest