We've got fruit flies here again. I didn't think I could find white wine to be more disgusting, yet the fact that it's an effective fruit fly trap actually seems to make it seem moreso. I read online about a trap people made by taking one litre plastic soda bottles, cutting off the top at around where it begins to taper, and turning it inwards to make a funnel. You put the white wine or other sweet liquid at the bottom of the bottle and the flies that fly in are unlikely to fly out, due to the funnel shape of the opening. I guess it kind of works like arrow slits in castles. Or it's supposed to--the flies didn't seem interested in going into the bottle at all, though maybe that's because there was a small, open dish of white wine next to it, the kind we've used in previous years to drown the bastards.

They seem to be worst in the middle of the day, so I've been going out to lunch for about a week. Which has cost me more money than I probably ought to be spending so I hope these things die out soon.

Last night for history class I read about the U.S. meat packing industry in the late nineteenth/early twentieth century and Theodore Roosevelt's crusade to introduce tougher government regulations for the industry. Sounds like it was long overdue, as Roosevelt was motivated partially by having witnessed firsthand during his military service soldiers dying from eating poisoned meat. Apparently rats and rat poison often got mixed in with the meat. Apparently in some cases people, due to factory accidents, got mixed in with the meat.

Roosevelt successfully got tougher, but considerably watered down from what he wanted, regulations passed through Congress. The chapter concludes by saying, "Not until 1968 did another generation of reformers, spurred by Ralph Nader, find it necessary to launch a new campaign to strengthen the inspection system. And in the twenty-first century, the health of the nation's meat remains a widespread concern."

Oh, great--The End, question mark. It's one of those times I'm very glad to be a vegetarian.

The last time I talked about PETA here, it was to talk about their attempt to end the Punxsutawny Phil Groundhog Day ritual. And I remarked how PETA really needs to learn how to pick their battles. I mean, let's try and end institutionalised animal torture before we go to work on widely beloved traditions. 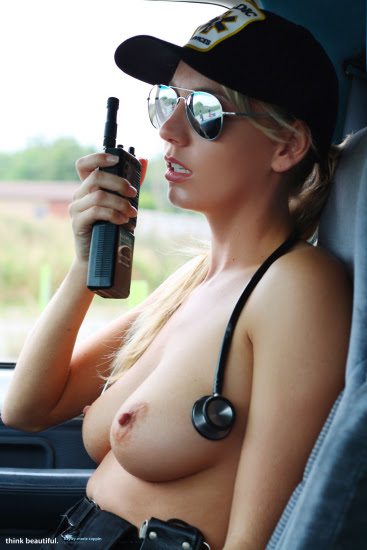 The connections between health and female beauty are many: from ancient fertility goddesses to the modern theory of genetic health. If this connection is real, it would follow that any healthy society should revere female beauty. It should also worry us that there are no such societies today. This is one of the reasons we created Body in Mind. We wanted to show what such a society might look like, a sort of blueprint, or inspiration for a healthier tomorrow. We know female beauty can motivate us towards our values, including health. It inspires us, it uplifts our souls, and this positive mental state has been shown to directly influence physical health. A topless paramedic might not be the most practical solution, but it's way more practical than trying to live without positive images of female beauty. Let Hayley-Marie jump start your heart.
Posted by Setsuled at 2:14 PM
Email ThisBlogThis!Share to TwitterShare to FacebookShare to Pinterest