What They Don't Guess About Peter Parker 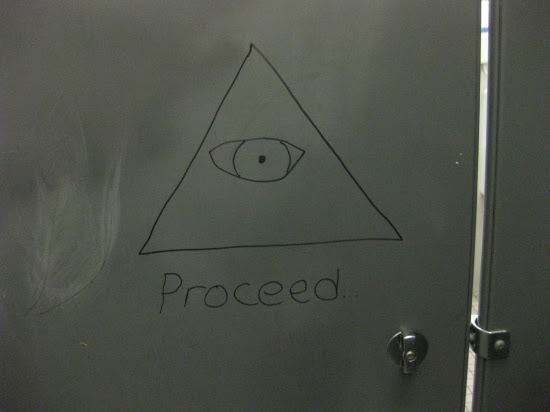 This was inside a bathroom stall at school last night. It's the theatre/art section of the school where my Communication class is for some reason.

All of my classes got out early yesterday for different reasons, so I spent a lot of time loitering around campus. My first two classes are normally forty-five minutes apart so yesterday I had an almost two hour gap. I considered going to a nearby Starbucks or something, except I keep hoping to run into a girl who talked to me while I was taking pictures of a tree a few weeks ago. She told me she wanted to applaud me for wearing a "real fedora and not a trilby like everyone else."

"Isn't a trilby just what they called fedoras in the U.K.?" I asked.

"No," she said and explained a trilby had a much smaller brim.

She went on to tell me that she was an apprentice hatter so I said, "I bow to your superior knowledge."

She told me she normally wears a bowler, though she wasn't wearing one that day for reasons she didn't explain. Then she walked away saying she'd just wanted to compliment me on my hat. It was only later I reflected that I ought to have tried to keep the conversation going--she spoke with the same vocal inflections as me, I wonder if we grew up watching the same movies and reading the same books. Of course, it's possible that if I do run into her again I'll find out she's hugely into Twilight or something. But it's proving a lot more difficult to run into her again than I'd thought--I figured she probably walked past that same spot every day at around the same time going between classes and it would be easy to spot a girl in a bowler. But who knows why she wasn't wearing a hat that first time and maybe she's continued refraining from wearing it for the same reason. And although I remember her being cute, she was holding a thermos in front of her face to block the sun and she was wearing the same black tank top and jeans a million other girls wear. It's entirely probable she's seen me plenty of times since, but I have no way of picking her out. So unless I start going up to every slender blonde girl and asking, "Are you the apprentice hatter?" I basically have to rely on the impossible--that a girl would approach a guy cold twice. It's clearly my turn and I might have walked past her a dozen times now without saying anything. Que mala suerte. I have a million natural conversation starters, too--"Where were you an apprentice hatter?" "Have you been to the Village Hat Shop downtown?" "Share your views on hats in the media." While she, meanwhile, can't have much more than, "I see you're still wearing a hat! Kudos!"

So instead I mostly sat around reading Spider-Man comics. I've been reading the original issues of Amazing Spider-Man again. Every time, I think how no adaptation for film or television has really captured the flavour of those comics. I mean, how much better would Spider-Man 3 have been if it had ended like this: 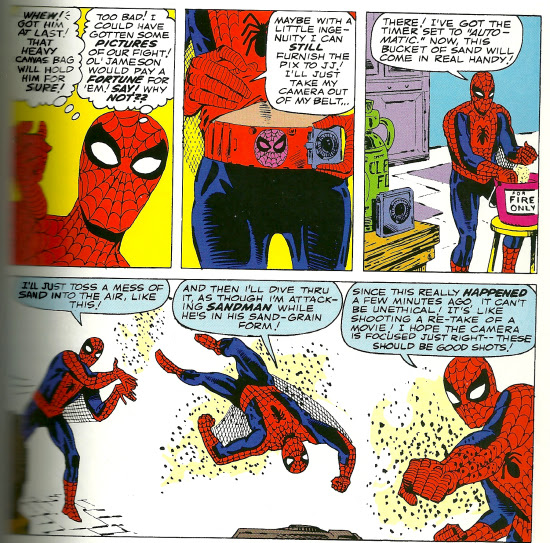 I don't think we'll be seeing any of this in the new movie either. It's hard to step away from the emotion massage for Spidey to throw sand in the air while he jumps around.
Posted by Setsuled at 5:00 PM
Email ThisBlogThis!Share to TwitterShare to FacebookShare to Pinterest