The first essay for my English class is a movie review and I decided to write about When a Woman Ascends the Stairs. He's having us do endless outlines and preparatory topic sentences--the sorts of things I hate doing. It reminds me of my high school art class when the teacher had us all do thumbnail sketches for every assignment, even if we were just copying another picture. I remember once we were supposed to copy a painting of a snowy landscape with a red barn at the horizon. I can't remember if it was me or Tim who drew the required three thumbnails as putting the horizon really high in one, really low in another, and tilted in the third.

Now for this essay, I came up with an outline that bears no resemblance to my first draft, though I honestly didn't do it on purpose.

But I considered it a good enough reason to rewatch some of Mikio Naruse's other films. Last night I watched Ukigumo again which, despite being one of his most popular films, I think may be my least favourite of the Naruse movies I've seen. It has in short supply the qualities I think make his other films great--instead of subtle storytelling and nuanced performances, it's a broad melodrama. It didn't surprise me it was one of star Hideko Takamine's favourite movies with Naruse, as the whole thing is kind of about Takamine the martyr--the good girl who has every bad thing happen to her and people don't realise how much she means to them until it's too late.

Yet, looking at my post from the first time I watched it, I talked myself into liking it a bit more.

In Indochina, Tomioka's attitude was cool towards Yukiko. He spoke casually insultingly to her, making her tell her age in front of strangers, telling her she looked older. There's an ingrained assumption of his superiority to her. In Japan, after the war, they both go through a complicated series of humiliations as their roles are broken down by circumstances in their world. While their relationship was hardly equitable by objective standards before, at least they had the comfort of knowing what was expected of them. But in post-war Japan, where Yukiko is forced to become a prostitute and eventually finds herself financially far better off than Tomioka, nothing seems to work right. The two love each other, and are irresistibly drawn back into each other's company, even as they find themselves bitter towards one another and completely at a loss as to how to interact. Yukiko's forced to realise she's smarter and better equipped to survive than Tomioka, and that she resents his endless string of superficial affairs with other women. He's in the uncomfortable position of depending on Yukiko more than he feels he has a right to, and knowing that she's a smarter, more able person that he is. It's painful and humiliating for them both, but they can't escape because they love each other.

Well . . . when you put it that way, me, I guess you have a point. It's really weird how I can't remember this impression, I genuinely feel like I'm reading someone else's blog. 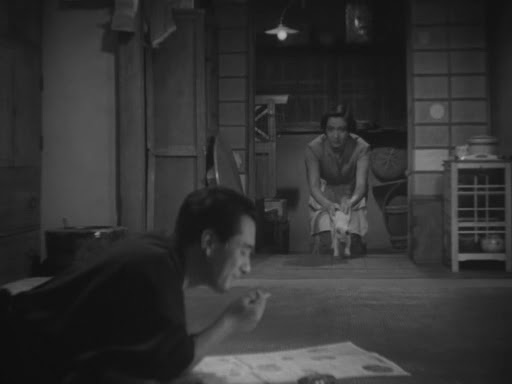 Last week, I watched Naruse's earlier film, Meshi, which I liked a lot more. It's a much more understated tale and I was particularly impressed by Setsuko Hara's performance this time having seen her in such a diversity of roles since the first time I watched Meshi--from the innocent girl in No Regrets for Our Youth to the damaged vamp in The Idiot.

In Meshi she plays a housewife who finds her relationship with her husband growing stale. The whole movie's about that relationship, and yet, fascinatingly, not once in the movie do husband and wife explicitly acknowledge the problem to each other. Watch this scene of Hara's character with a group of friends she hasn't seen in a long time and notice how subtly we're told that her marriage is in trouble;

A lot of it is Setsuko Hara's performance. We can read a lot in her face for our knowledge of the problem, and yet we can also believe her friends might not be picking up on it. That sort of thing can really connect an audience to a character. Naruse's tendency to use only one camera, too, makes us focus on people. Every cut makes the next shot seem really important somehow.

I was rather charmed by this clip I just came across of Hara from the filming of No Regrets for Our Youth;