A Day Not in the Life 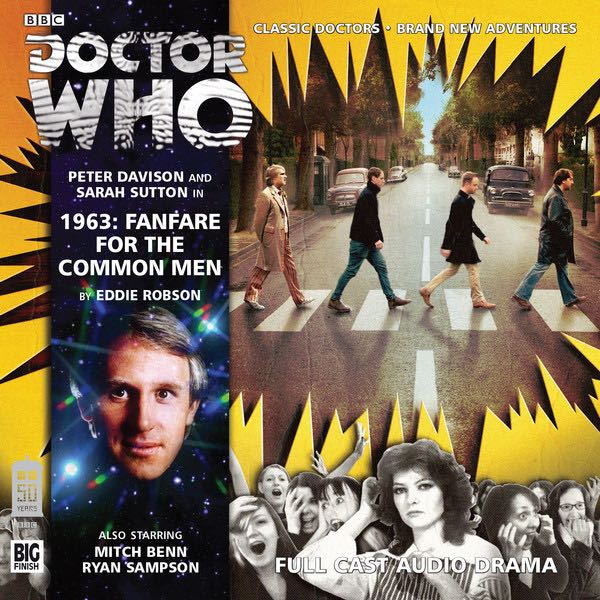 Could The Beatles be swapped out in history for another band from Liverpool? Of course not and writer Eddie Robson has a lot of fun arguing that point with his 2013 Doctor Who audio play, Fanfare for the Common Men. Part of a series of audios recorded for Doctor Who's fiftieth anniversary, this one features the Fifth Doctor (Peter Davison) and his companion, Nyssa (Sarah Sutton), travelling to 1963--the year Doctor Who premiered--to see The Beatles only to be disappointed when a trio called The Common Men emerge from the plane to thousands of screaming fans.

Robson is clearly a Beatles fan and well versed in Beatles trivia and he cleverly weaves the biographies of John, Paul, George, and Ringo into the lives of Mark (Mitch Benn), James (Andrew Knott), and Korky (David Dobson). Parts of the story are framed by interviews with The Common Men in later years in which they have conflicting memories of the Doctor or Nyssa turning up at clubs in Liverpool or Hamburg or stopping a strange armed man at the airport.

Several Beatles-ish songs are heard in the audio play and the Doctor wonders why whatever sinister force that took the Beatles out of the picture didn't bother to steal their great songs in the process. Harnessing the psychic power of a rabid fanbase seems to be part of the plan and the story ultimately makes the point that there's no substitute for the songs written with the real genius of The Beatles. Though the Doctor concedes The Common Men aren't bad.

The band were first mentioned in the first Doctor Who serial, An Unearthly Child. Susan, the Doctor's granddaughter, had been a fan. In Fanfare for the Common Men the Doctor remarks he never understood their appeal. The audio is filled with Beatles quotes but here Dobson allows the Doctor an appropriate Bob Dylan quote when he adds, "But I was so much older then."

Posted by Setsuled at 7:26 AM
Email ThisBlogThis!Share to TwitterShare to FacebookShare to Pinterest
Labels: audio play, big finish, doctor who, fanfare for the common men, peter davison, sarah sutton