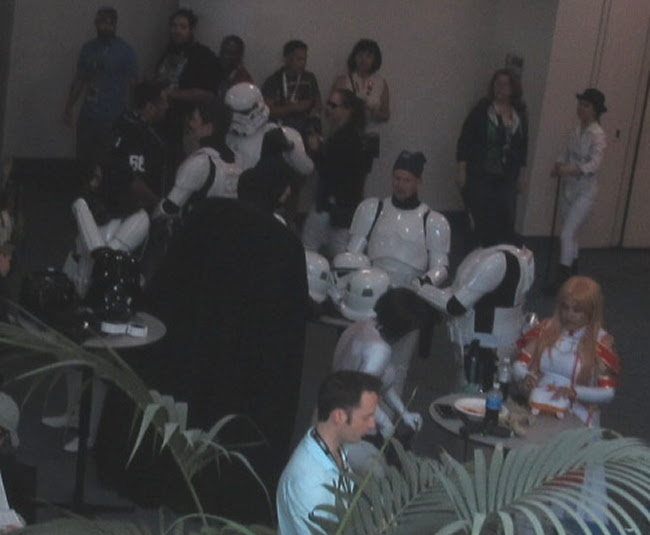 I didn't notice the gender swapped Alex DeLarge when I took this photo by the expensive pizza cafe at Comic Con but I applaud her now, wherever she is.

I don't know if I've ever mentioned how much I love the door staff at Comic Con, the people who stand by the badge detectors or just hold the doors. Many of them have no clue about geek culture but are unselfconsciously vocal and seem to have a great time. On Sunday a middle aged black woman stationed at one of the doors was loudly and enthusiastically misidentifying costumes. She gave a shout out to "Gladys Knight!"--a Princess Leia. When a woman walked by dressed as Captain Marvel the door lady yelled, "Mockingjay Lady! I see you, Mockingjay Lady!" Captain Marvel gave her a strained smile. When I walked by I was greeted as, "Laurence Fishburne! Hey, Laurence Fishburne, I see you!" I'm white, by the way. I was tempted to stop and ask her just who she thought Laurence Fishburne was.

I was wearing a brown fedora, long sleeved grey button down shirt, brown denim trousers, and carrying a brown messenger bag. Maybe she thought I was Cowboy Curtis, Fishburne's character from Pee-Wee's Playhouse. That was on Sunday--most days at the Con I was wearing a sport coat and bow tie along with a fedora which usually gets people to ask me, "Are you Indiana Jones or Doctor Who?" That's an ambiguity I'm comfortable with but on Sunday I was coming from the Maritime Museum where the work I do, particularly in this recent heatwave, can be strenuous and dirty so my normal attire is fedora, shirt, and trousers. I knew I'd get pegged as an Indiana Jones cosplayer, which wouldn't bother me except I know the hat is wrong, the shirt is the wrong colour, the bag is wrong, etc. If I'm going to cosplay as Indiana Jones, I want to do it right, not get the pitying acknowledgement of a bare minimum effort. I tried to head it off by wearing a grey shirt and I'd recently added a chinstrap to the hat (this is required for volunteers on the ships) but no such luck. Several people kindly complimented my effort to look like Indiana Jones, I even received a courteous nod and smile from a guy who was wearing a just about perfect Raiders replica outfit. Oh, well. At least one person thought I was Laurence Fishburne. 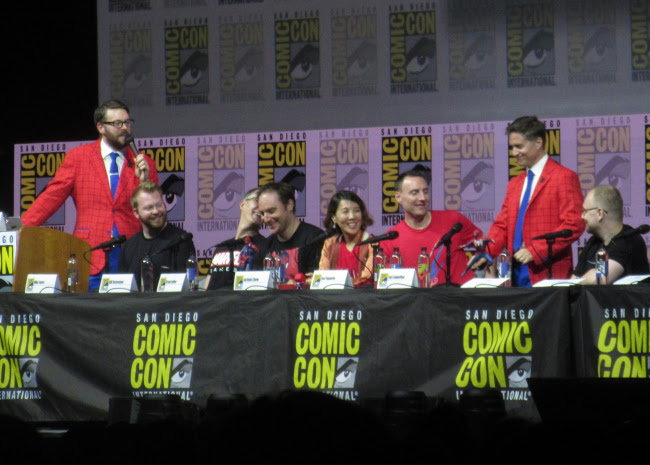 The highlight of the Marvel Games panel, which I saw on Thursday in Hall H, was that the moderator, Greg Miller, and Yuri Lowenthal, who voices Spider-Man in the upcoming game called Spider-Man unexpectedly found themselves wearing exactly the same outfit.

I don't play a lot of video games nowadays, when I do I usually just replay Skyrim. But Spider-Man looked like a fun game though the gameplay looked precisely like Arkham Asylum.

The Marvel Games panel was one of two I sat through in Hall H between Doctor Who and Better Call Saul, the other being Dragon Ball Super, an upcoming movie in the Dragon Ball franchise. 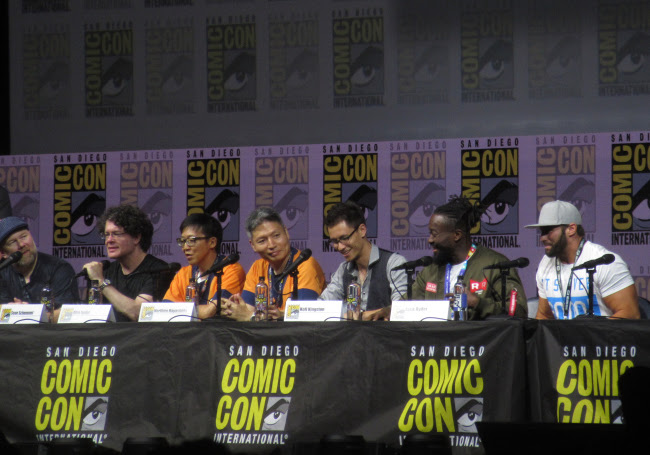 The panel featured English dub voice actors Sean Schemmel (Goku) and Christopher Sabat (Vegeta), who seemed to be well known to fans of the franchise. I wouldn't know, as much as I love anime, with a special fondness for 80s anime, I've never gotten Dragon Ball. Usually with things I don't like I can at least sort of understand why it appeals to other people but Dragon Ball is like a dog whistle to me, it's a sound I just can't hear. There were two surprise panellists, famous pro-wrestlers named Kofi Kingston and Zack Ryder--Kingston tried to describe what he loved about the franchise. He talked about the pleasure of pushing oneself to a "limit" or past a "limit". I feel like there are plenty of movies and shows with that concept, though, without featuring big weird lumps of muscle. I guess you need to really love muscle to appreciate it. Anyway, if you want to see the panel, don't let me discourage you, the whole thing's on YouTube here. 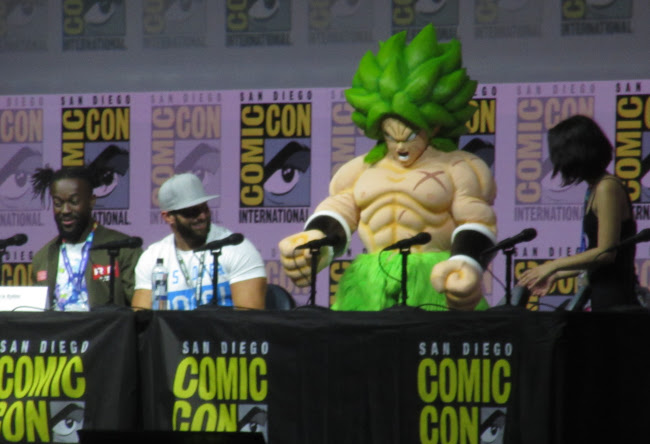