Return of the Dog 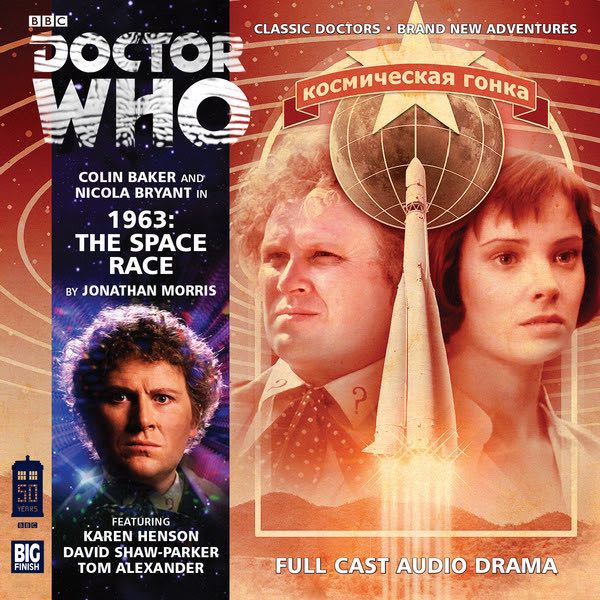 There's always a chance the oppressed will become the oppressors. The Soviets would've done well to remember that when they sent dogs into space in the 2013 Doctor Who audio play 1963: The Space Race. This slightly more amusing, more Cold War oriented, version of Planet of the Apes concept is also one of the gorier audio plays, making it perhaps appropriate that it is a Sixth Doctor story.

The Space Race is based on the true story of Laika, the stray dog sent by the Soviets to space in 1957. The real Laika died in the rocket but in this audio she returns six years later having somehow gained the power of speech and human intelligence. Voiced by Samantha Beart, she's at first mistaken for a missing cosmonaut by the Doctor (Colin Baker) and the staff of the Soviet space programme when they hear her voice transmitting from a rocket that had been stuck on the dark side of the moon. Laika only seems to want water and freedom until Peri (Nicola Bryant) helps her at which point Laika's motives become decidedly less sympathetic.

But, perhaps in reference to the Cold War setting, the Doctor and Peri are never quite sure who to trust. They themselves are posing as spies posing as scientists, an extra layer of subterfuge added to the Power of the Daleks concept. But the bloody and inhumane methods apparently involved in giving animals the ability to talk ethically simplifies things quite a bit.

The Six Doctor's run on television was distinguished by some exceptionally grim stories, most notably the proto-Hunger Games story Vengeance On Varos. Though Six is also an appropriate Doctor for this story because it was in the Sixth and Second Doctor story, The Two Doctors, where the Doctor became a vegetarian courtesy of writer Robert Holmes (who was himself a vegetarian). The Ninth Doctor would later be seen eating meat in the television story "Boom Town"; there's apparently no canon account of when or why the Doctor decided to start eating meat again (though apparently there was a Sixth Doctor comic that addressed the subject). The events of The Two Doctors are never mentioned in Space Race though vegetarianism does come up, understandably. Though, considering how much meat winds up being involved in this story, I'm not sure Robert Holmes would approve.

The writer of The Space Race, Jonathan Morris, has a lot of fun turning the rhetoric of uprising and revolution against the Soviets as Laika begins to organise her comrades. There's a minor romance subplot between Peri and a Soviet military sergeant (Stuart Denman) that reminded me of the flirtation between Ace and the Soviet officer in Curse of Fenric. It was an interesting contrast between how the Soviets were portrayed on Doctor Who in the 80s and how they were portrayed in 2013. The Eleventh Doctor story "Cold War" aired that same year but in the general rush of the one hour episode there's not as much time for conceptual contemplation. The Curse of Fenric, like The Happiness Patrol, might have been part of a general anti-Margaret Thatcher feeling in expressing sympathy for Communists. But it always struck me more as part of a recurring message in fiction of the 80s--not unlike Star Trek VI--to promote the idea of the shared humanity (or let's say sentience) between the parties of opposing sides. I might have liked a little more of that in The Space Race but it's an enjoyable audio play.