The Cat After the End 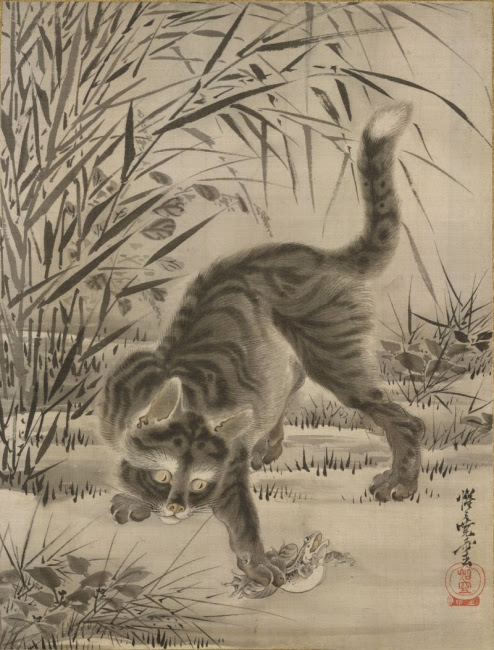 The new Sirenia Digest has a wonderfully weird new story from Caitlin R. Kiernan called "A CHANCE OF FROGS ON WEDNESDAY". It's a bit more surreal than usual for Kiernan or the Digest. A first person narrative that feels a bit like Robert Browning's "Childe Roland to the Dark Tower Came" it's set in a post-apocalyptic world where the structure of reality has broken down along with everything else.

The unnamed protagonist encounters one strange person after another in his journey to a tower and a "Pale Lady". The people he meets sometimes shift into other people or just have abrupt emotional shifts. The protagonist is carrying a jar in a paper bag, the contents of which, hinted at, I'm tempted to interpret as cruelly suppressed, instinctual need, if not sexuality. The protagonist mentions having been an astronomer before the apocalypse, the fact that he was a scientist highlighting for me the distress in a world dominated by weirdness and chaos. I was a little reminded of "The Inner Light", the Star Trek: The Next Generation episode, probably only because I happened to have watched it last night. But the story added a new level of dread and sadness to my recent memory of watching Picard observing troubling signs through his telescope, not knowing he's trapped in a dream of a world that already died a thousand years ago.

The new Sirenia Digest also includes some of Caitlin's thoughts on Harlan Ellison, who was a friend of hers. The issue is well worth reading.

Posted by Setsuled at 11:07 AM
Email ThisBlogThis!Share to TwitterShare to FacebookShare to Pinterest
Labels: a chance of frogs on wednesday, caitlin r kiernan, dream, horror, science fiction, sirenia digest, surreal