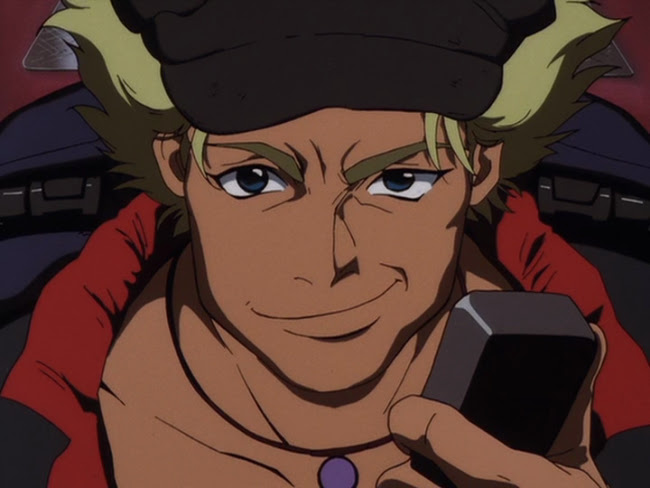 Anime is a genre known for formula--even some of the best anime series employ stock characters and plots. Which is one of the things that makes Cowboy Bebop so special and in this series of abnormalities the seventh episode is one of the most unusual. 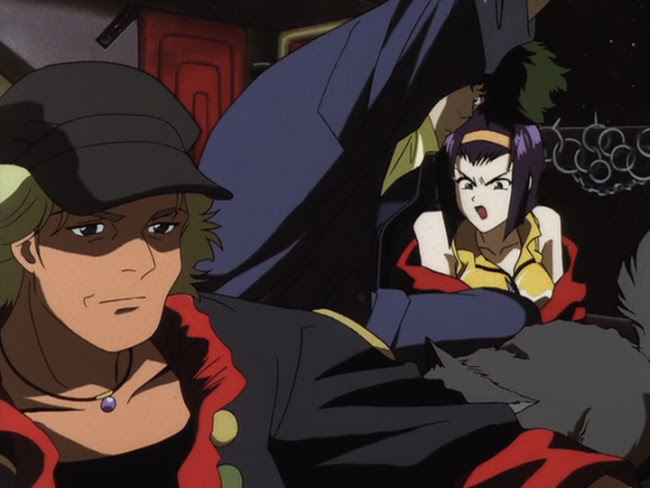 How many anime series have an episode that pays homage to the American trucker craze of the 70s? How many anime series would, without a trace of irony, have as its one off truck driver protagonist a butch middle aged woman? I'm pretty sure Cowboy Bebop is the only series to tick any of those boxes, let alone all of them. 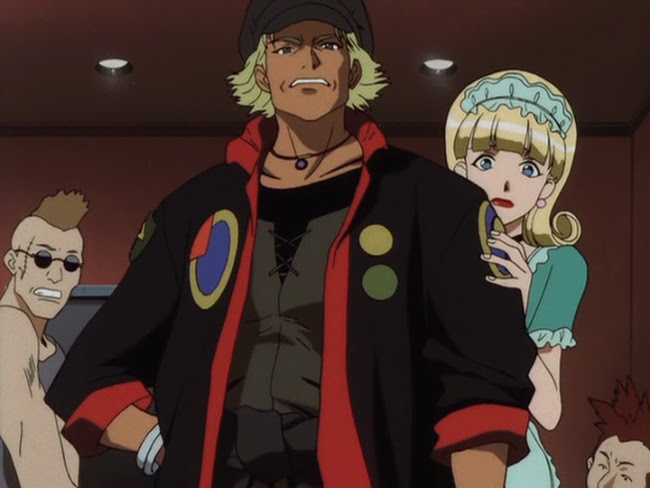 V.T. (Tomie Kataoka) fits into the series' larger thematic framework in that she presents a different standard for gender signifiers. She doesn't seem to care for makeup and her clothes are more traditionally masculine. Her cat is also another example of a peculiarly intelligent animal--anyone who's spent any amount of time with a cat would raise their eyebrows at how easily V.T. can get the animal to follow her and obey commands. 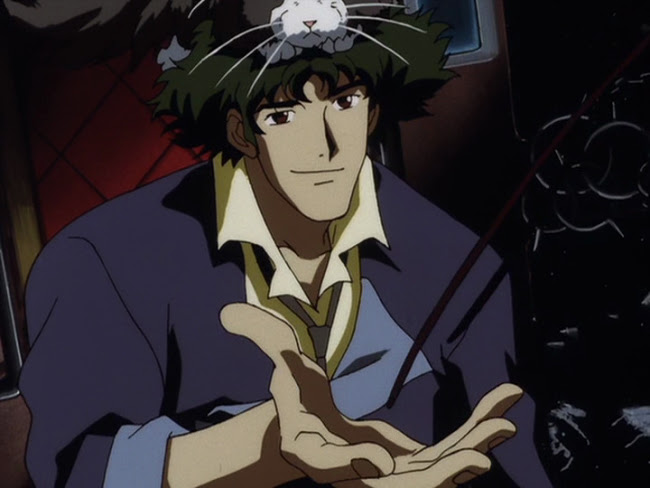 But the cat does indulge in a well-worn plot device when it takes a liking to Spike (Koichi Yamadera) despite V.T.'s evident dislike for him. This isn't the most dignified episode for Spike whom we first see with his pants down sitting on a toilet. 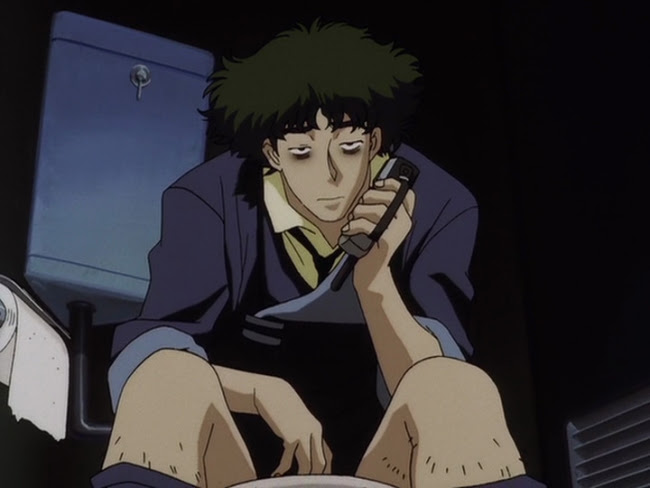 Before the episode is over, we'll see him with egg yolk on his lap and later sitting in his underwear impatiently next to a dryer. Even his beloved ship is vandalised. Why does this episode go to such pains to humiliate him? Maybe to indicate again that the world is trying to make him a beast. Maybe to emphasise V.T.'s stability. Once again, the show directly references music, in this case V.T.'s love for heavy metal--another new cocktail. 70s truck drivers aren't typically associated with metal anymore than cowboys are with bebop. 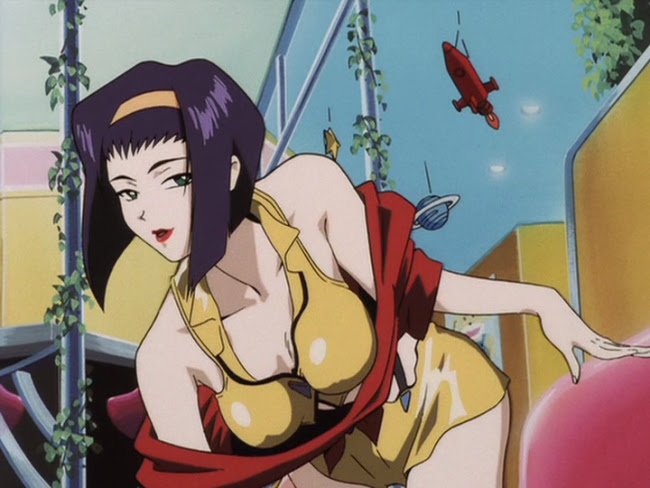 Although her ship is damaged, Faye (Megumi Hayashibara) fares a lot better than Spike in this episode. For once, she's never tied up though she does misidentify their bounty. She uses her charms on the big muscle guy when she should have been looking at the Woody Allen guy. 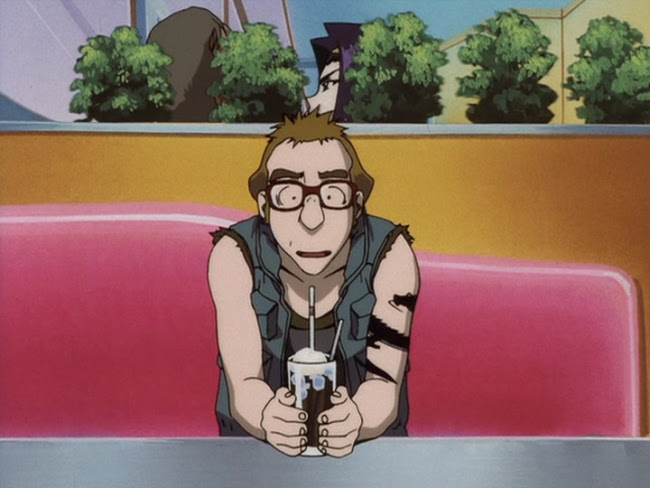 Why the show's creators chose to poke fun at Woody Allen here--tellingly found in a children's restaurant called "Woody's"--I have no idea. So far I don't think anyone's made allegations about Woody Allen smuggling truckloads of liquid explosives. 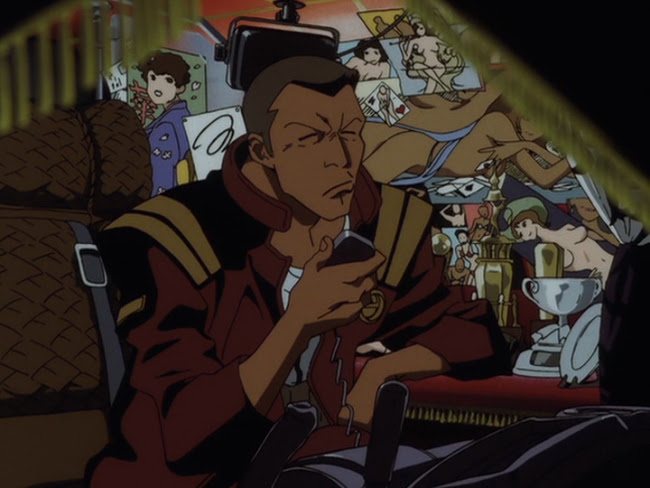 I love the personalised details on the trucks of the other drivers when V.T. enlists their aid in tracking down the target. It's such a 70s trucker movie. It's like something from Convoy or Smokey and the Bandit. How many viewers in Japan even got these references? 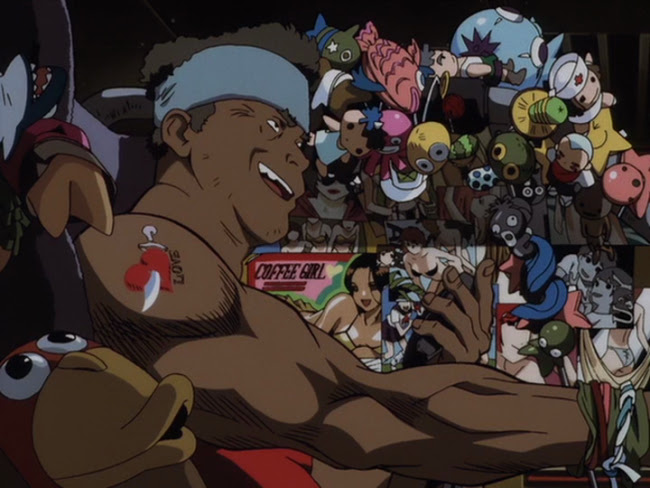 The episode ends with Spike winning a game that had apparently gone on for some time--people betting dollars they can guess what "V.T." stands for. The moment continues the conversation about symbols and what they mean or don't mean--in this case, V.T.'s name, which ends up meaning quite a lot. When Spike doesn't take all the money that has amassed from other people playing the game, it's the reversal on the humiliations he'd suffered throughout out the episode. He gets his cool back. He still has his sense of honour and fair play, the slapstick hasn't changed him.