The Guardians of the Comic Con 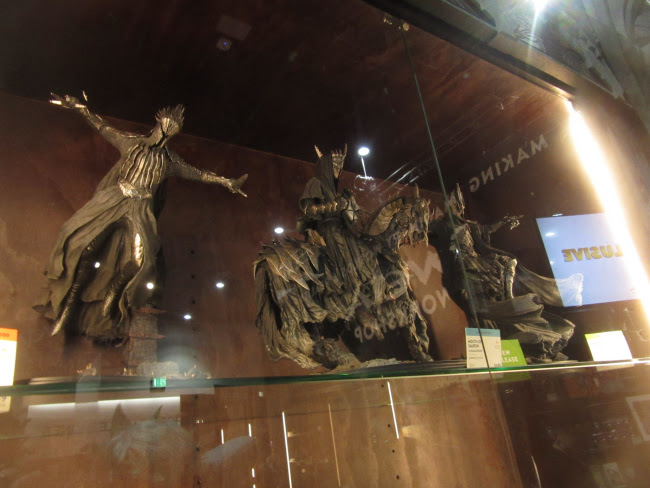 Oh, what happy Nazgul. How often can you say that? That photo's from yesterday at the Weta booth at Comic Con. I was at Comic Con all day yesterday and didn't hear the news about James Gunn getting fired by Disney until I got home. He's been fired after a pro-Trump web site drudged up ten year old tweets in which Gunn joked about paedophilia. This marks a new line in how speech is handled in the media. Unlike Roseanne Barr's tweet, Gunn's were clearly meant ironically, at least they look that way to me. The fact that they're so old and that Gunn has become such a different person is also a startling aspect to his firing and makes it ironic that he has been one of the most vocal supporters of a low tolerance for offensive language. His endorsement of Roseanne Barr's firing was expressed not as a recognition of the racism that motived her tweet but by the fact that "her words are considered abhorrent." With the emphasis on how words are perceived more than on how they were intended a very broad spectrum of people are logically fair game for the axe.

I know several people who've exhibited this perplexingly short-sighted zeal. One person in particular I remember being quite casual with transphobic humour now demands blood from anyone who makes a vague comment that could possibly be taken as a offensive by someone somewhere. I often think, "Don't these people remember who they were?" Of course, they probably do, maybe only on a repressed level, and self-loathing is probably a big component of what we're seeing.

It was at Comic Con ten years ago that I first heard of James Gunn. It was for a panel for XBox live about a series of comedy/horror short films. James Wan and David Slade were there--James Gunn was supposed to be there but he couldn't make it for some reason and his brother Sean Gunn was there instead, amusingly pretending to be James with a flawless deadpan. I recognised Sean Gunn from his role on Gilmore Girls and I later learned his presence on the show was taken as one of Amy Sherman Palladino's hints that she wasn't writing from the place of the nice friendly family show Gilmore Girls was typically presumed to be. The material I saw on that XBox panel certainly wouldn't have led me to think James Gunn would be working for Disney one day but, then again, it was already basically an old career model at that point. Peter Jackson and Sam Raimi had both made reputations for themselves making over the top horror films in deliberately bad taste before they became known for making family friendly blockbusters. But back then, there used to be more demarcations, there used to be media everyone assumed only adults were exposed to and other media that wasn't. Now people assume children could be watching at any time, I guess, and if they aren't, the outrage machine will make sure everyone knows about the damning bits. Naturally if Gunn's old tweets weren't now plastered all over the place 99% of people would never have heard about them.

I remember hearing Gilbert Gottfried on The Howard Stern Show doing his racist Dracula impression and Howard Stern laughing in consternation that Disney still employs him. Of course, this contradiction did finally catch up with Gottfried and outside of the Kingdom Hearts games I don't see any Disney credits on his imdb from the past four years. That kind of humour, where the comedian deliberately embodies an offensive perspective, goes back to Lenny Bruce, the innovative comedian who likely wouldn't have gotten a career in these times. Which is too bad, we need someone like him. There's a kind of exorcism that happens with that kind of humour and without it demons only fester.

A lengthened bird ascends the wooden house.
Repeated beaks release the bouncing tweets.
Enormous arms distort the tiny mouse.
Excessive grass consumed the feeble cleats.
A northern island ends with tripled eyes.
A mouldered plate awaits behind the stays.
To choose a lack of shoes denotes disguise.
A foot could feel the many varied ways.
An ageing war returned in plastic dreams.
The zombies left the floor to shuffling shoes.
A bus of bad souffles has broke the seams.
In slumbers lean the baku sings the blues.
A razor wire grid disrupts the song.
For mem'ries short the sword is very long.