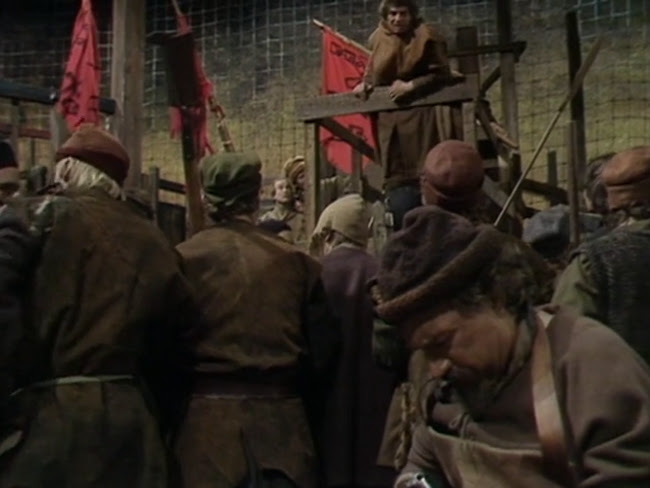 A rough man with a crude sense of humour stands before a restless mob. He says to them;

Be brave, then; for your captain is brave, and vows
reformation. There shall be in England seven
halfpenny loaves sold for a penny: the three-hooped
pot; shall have ten hoops and I will make it felony
to drink small beer: all the realm shall be in
common; and in Cheapside shall my palfrey go to
grass: and when I am king, as king I will be . . .
. . . there shall be no money;
all shall eat and drink on my score; and I will
apparel them all in one livery, that they may agree
like brothers and worship me their lord.

These proto-Communist sentiments with healthy doses of distinctly Fascist notes are spoken by the rebel leader Jack Cade in William Shakespeare's Henry VI Part 2. A brave captain he certainly is which must be a refreshing contrast to the pious and gentle but weak and ineffectual Henry VI. Cade doesn't appear until Act Four of the play and before his appearance Henry's weak will has permitted the contending ambitions of noblemen to play out on the stage in increasingly ruthless and violent ways. 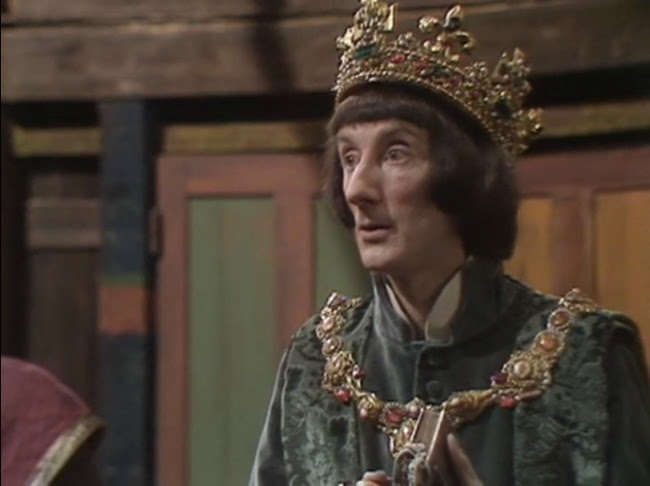 Believed to be one of Shakespeare's earliest plays--confusingly, it's generally believed to have been written and performed long before Part 1--Henry VI Part 2 is a nightmarish and effective portrait of chaos consuming high and low. I watched Jane Howell's BBC production from the 80s last night, which continues from her production of Part 1, which I reviewed a few weeks ago. Her Part 2 continues to use the same minimalist playground set with realistic, period costume and carries over the same actors in the same roles. 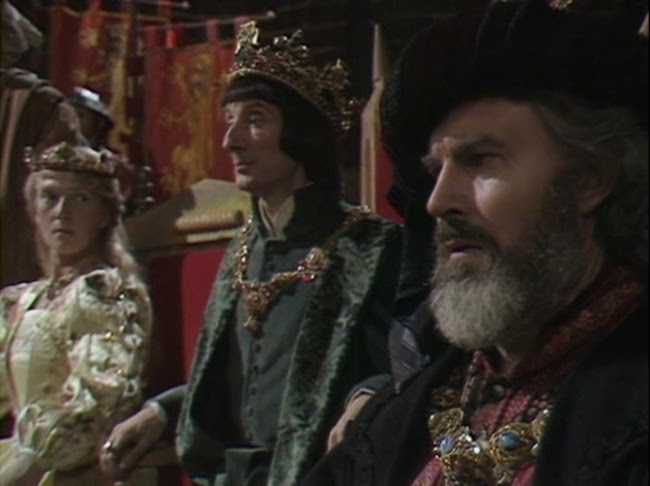 David Burke as Gloucester had seemed underused in the first part but now here his casting makes sense as he becomes the only decent and courageous person left among Henry's (Peter Benson) advisers. Henry's new wife, Queen Margaret (Julia Foster), has blossomed from the demure French woman captured by an enraptured Suffolk (Paul Chapman) into a fierce and ambitious plotter. 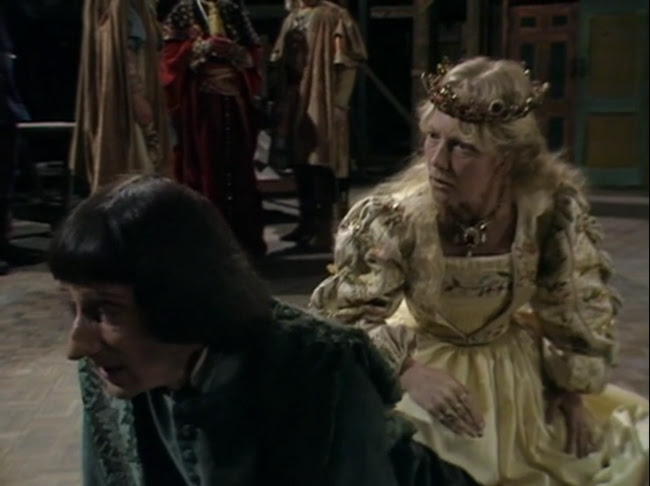 At times I wasn't sure if I felt Foster's performance wasn't over the top. When Gloucester's death is discovered, she immediately lays into the weeping Henry, shouting at him about how he should be concerned about her reputation if she's blamed for the murder. The text would support a more seemingly grieved performance from her:

. . . So shall my name with slander's tongue be wounded,
And princes' courts be fill'd with my reproach.
This get I by his death: ay me, unhappy!
To be a queen, and crown'd with infamy!

Ah, woe is me for Gloucester, wretched man!

Be woe for me, more wretched than he is.
What, dost thou turn away and hide thy face?
I am no loathsome leper; look on me.
What! art thou, like the adder, waxen deaf?
Be poisonous too and kill thy forlorn queen.
Is all thy comfort shut in Gloucester's tomb?

Obviously she is emotionally bullying and manipulating Henry and the point of the play is that he's weak willed but that's all the more reason I think her performance should be a little subtler. But Foster is effective later cradling the head of the recently decapitated Suffolk like an infant. 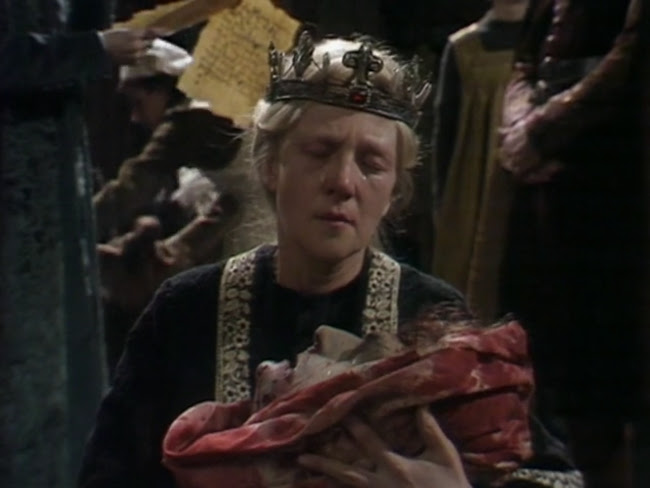 This moment is pretty hideously foreshadowed earlier when she and Suffolk are together.

If I depart from thee, I cannot live;
And in thy sight to die, what were it else
But like a pleasant slumber in thy lap?
Here could I breathe my soul into the air,
As mild and gentle as the cradle-babe
Dying with mother's dug between its lips:
Where, from thy sight, I should be raging mad,
And cry out for thee to close up mine eyes,
To have thee with thy lips to stop my mouth; 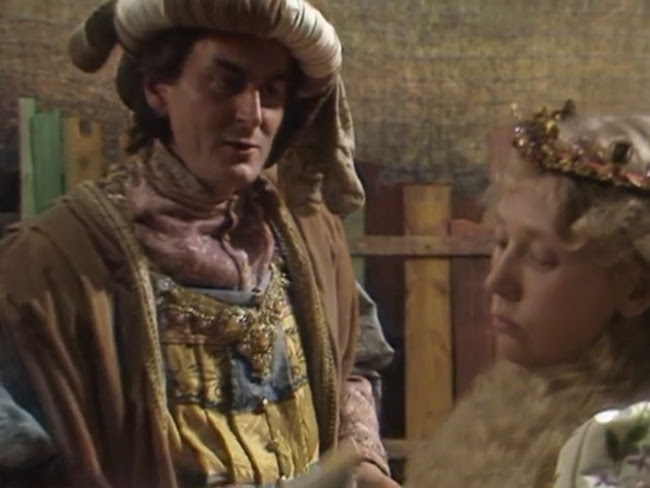 It's a group of lowly pirates that supplies Suffolk's doom, a scene immediately followed by the one introducing Jack Cade, played in Howell's production by Trevor Peacock, a striking choice given that he played the emblem of English virtue, Talbot, in Part 1. 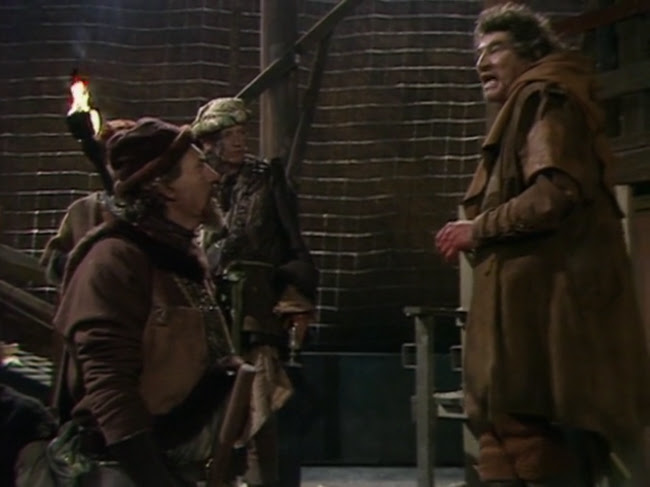 What is Howell trying to say with this casting choice? Perhaps it's a point about how a country's purest sentiments can so easily be turned back on it. Peacock does a great job, in any case. His impression of roughness and plainness is key to both roles but in Cade he invests more charisma and coarseness. David Burke, in addition to playing Gloucester, also plays the Butcher here, one of the more vocal members of Cade's mob. Howell has Burke address the screen with his humorous asides that mock Cade's speech. The moment is funny in itself but in the broader context of the play it's an ominous, dark bit of insightful writing that the Butcher is quite willing to kill and overthrow a kingdom for a man he clearly thinks is a fraud and a fool.

My mother a Plantagenet,--

[Aside] I knew her well; she was a midwife.

My wife descended of the Lacies,--

[Aside] She was, indeed, a pedler's daughter, and
sold many laces. 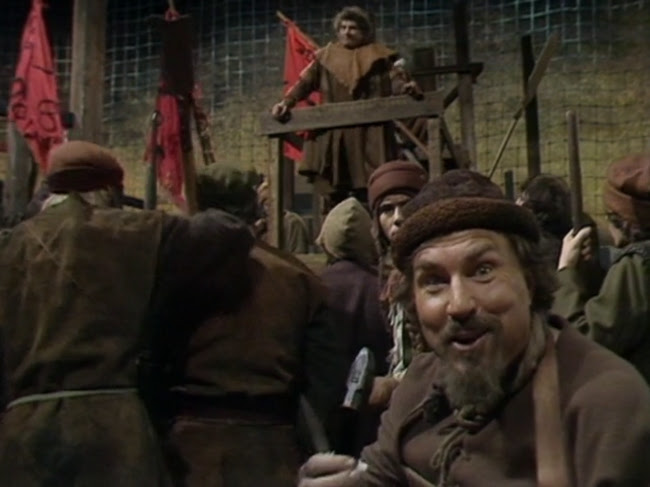 There's certainly a lot of decapitations in this play, none more gruesome than Lord Say (Derek Farr) and his son's head on pikes being made to kiss each other by Cade's mob. 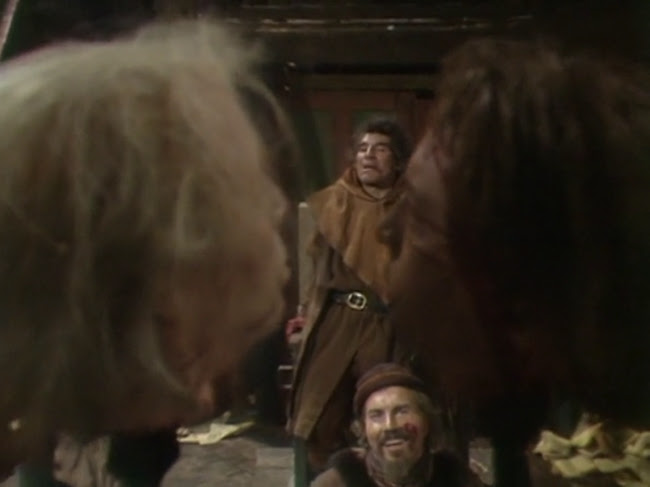 How does the would-be sovereign Cade justify this--aside from indulging the mob's natural sadism, that is? Say's crimes include speaking "with the tongue of the enemy" (knowing French), being educated, trembling, and, finally, defending himself too well.

Tell me wherein have I offended most?
Have I affected wealth or honour? speak.
Are my chests fill'd up with extorted gold?
Is my apparel sumptuous to behold?
Whom have I injured, that ye seek my death?
These hands are free from guiltless bloodshedding,
This breast from harbouring foul deceitful thoughts.
O, let me live!

[Aside] I feel remorse in myself with his words;
but I'll bridle it: he shall die, an it be but for
pleading so well for his life. 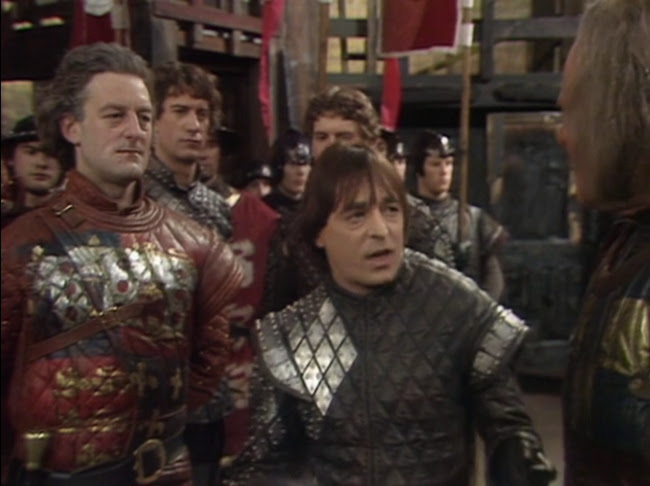 The play ends with bloody battle after York (Bernard Hill) returns from Ireland with an army. Also with York is his son, Richard (Ron Cook), a clever young man with a hunchback who shows himself a skilled swordsman. I feel like he probably wouldn't adjust well to peace time.

A pager blinks impertinent to life.
The copper phone intrudes at Sprocket's lunch.
Electric pins have scorched the wooden fife.
The mice embark upon a cheesy hunch.
The red approaches first as azure drank.
The semblance of a cloud dispersed aloft.
In slowly filling sinks we swiftly sank.
A magic floating rope discreetly coughed.
A glossy eye rebounds from racket mesh.
To stretch across the court a hanger cuts.
A lettuce palm conceals the sun afresh.
But glowing people bide in golden huts.
A crown submerged in gentle hairy clay.
The dive dispersed infects the warring day.