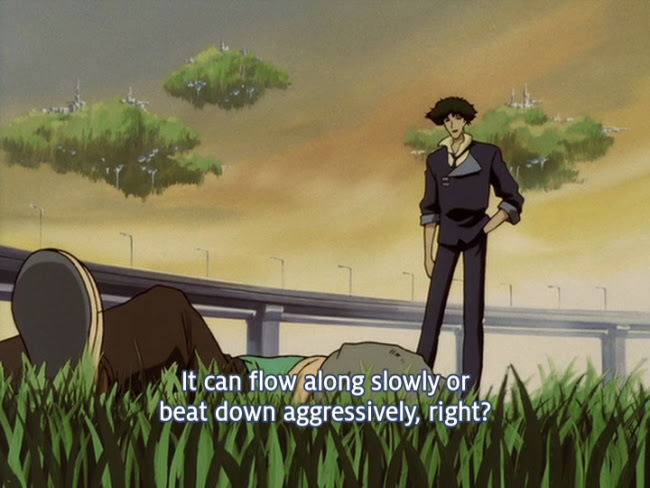 The eighth episode of Cowboy Bebop focuses on Spike Spiegel's martial arts style. In so doing it offers a broader comment on how he survives and fits into a world based on seemingly constant, seemingly chaotic change: Spike becomes like water. 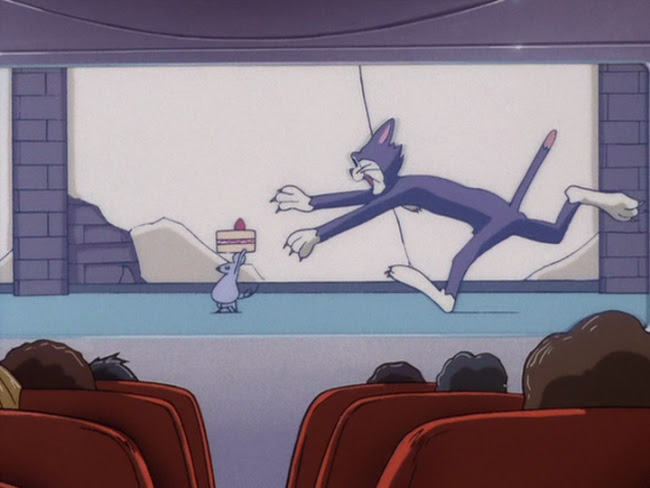 The first scene is an amusing and exciting vignette that showcases again Cowboy Bebop's creative and complex background details. On a passenger ship, a brief shot shows a Tom and Jerry knock-off cartoon and then other brief shots show assortments of passengers, including a woman holding a baby up to a window. 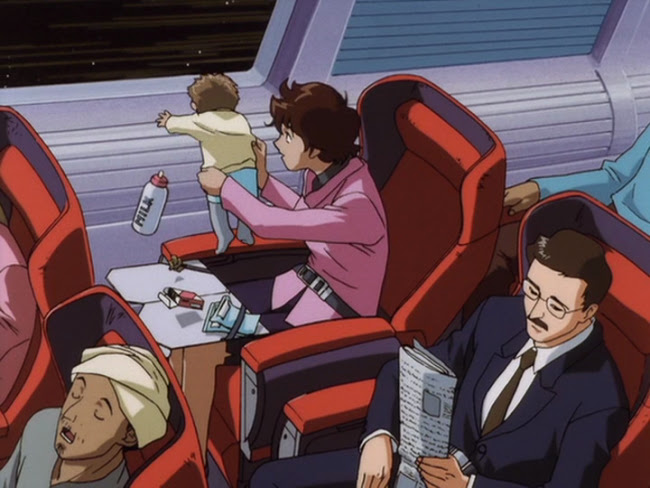 Then a hijacking occurs. We never learn the hijackers' objective, whether they were terrorists or sought to ransom the passengers for profit. They never get the chance to make their demands before they're spectacularly thwarted by Spike (Koichi Yamadera) and Faye (Megumi Hayashibara). Spike absurdly manages to beat two of them by pretending to be a sleepy, disoriented passenger whose every stretch and scratch of the head just happens to inflict a devastating blow. 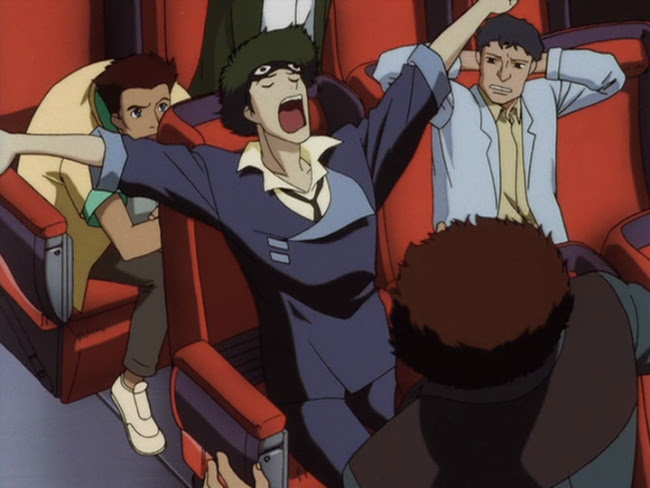 It's an extreme example of the oddly relaxed martial arts style Spike has already exhibited throughout the series. In the process he earns the admiration of a desperate young man, Rocco (Takamura Nakao), who also happens to be aboard the ship. When he finally convinces Spike to give him some tips later, Spike gives Rocco a speech that closely paraphrases a famous interview with Bruce Lee. 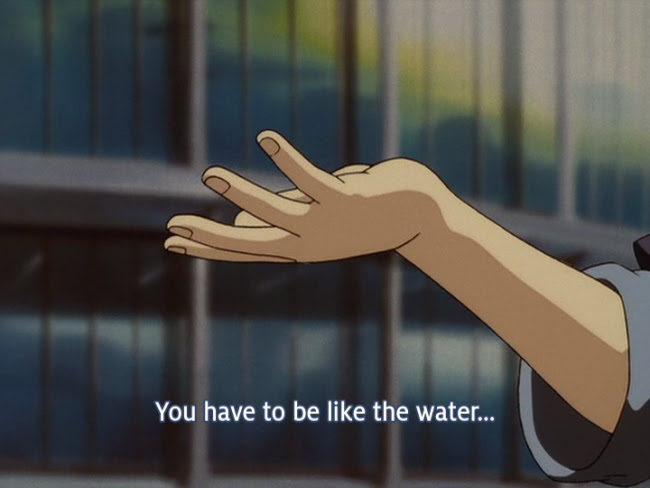 But it reminds me of something else, too, a popular quote from Salmon Rushdie often invoked by people discussing post-modernism.

He looked into the water and saw that it was made up of a thousand thousand thousand and one different currents, each one a different color, weaving in and out of one another like a liquid tapestry of breathtaking complexity; and Iff explained that these were the Streams of Story, that each colored strand represented and contained a single tale. Different parts of the Ocean contained different sorts of stories, and as all the stories that had ever been told and many that were still in the process of being invented could be found here, the Ocean of the Streams of Story was in fact the biggest library in the universe. And because the stories were held here in fluid form, they retained the ability to change, to become new versions of themselves, to join up with other stories and so become yet other stories; so that unlike a library of books, the Ocean of the Streams of Story was much more than a storeroom of yarns. It was not dead but alive.

This comes from Rushdie's 1990 book Haroun and the Sea of Stories (a larger excerpt containing the quote can be found here). As the previous seven episodes have rigorously shown us, the future solar system depicted by Cowboy Bebop is one where stories and identity have become almost unrecognisably mixed in the wake of an accident that alters the appearance of the Earth itself. Spike's philosophy seems well suited to the situation, allowing him to adapt to whatever comes, though perhaps it's this prioritising flexibility over assertiveness that prompted Vicious to label him a beast. 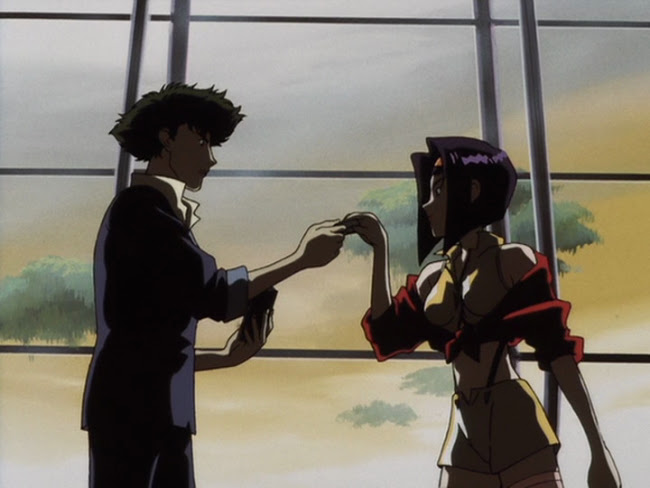 Being a bounty hunter, as a profession, is certainly a much more flexible one than Spike's previous career with a syndicate. We never find out what the hijackers want and Spike probably never does, either. His job isn't motivated by ideology or loyalty, only money, but we see again and again that his sense of honour does influence his actions, as it does in this episode. 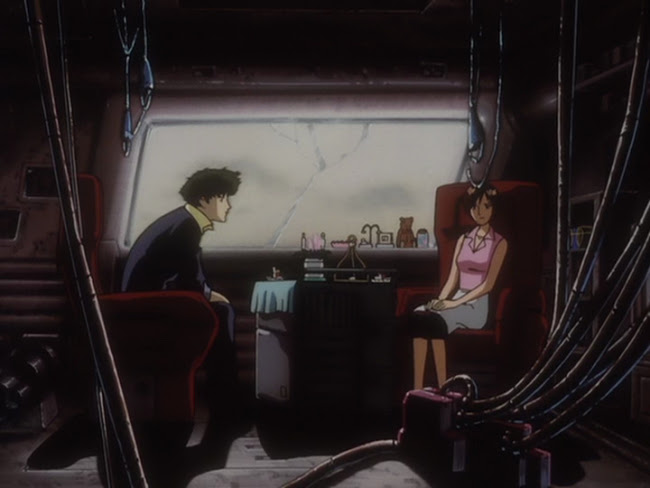 It turns out Rocco has a bounty on his head but when Spike finds out the guy has stolen an incredibly rare plant with the objective of healing his sister's blindness he seems to feel no hesitation when deciding to help Rocco instead of turning him in. 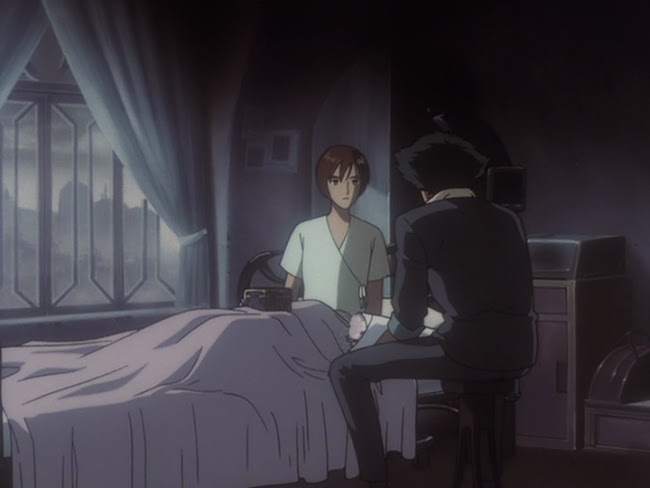 A story where a man gets himself in trouble by trying to cure the blindness of a woman he cares about is a well-worn device. It's not unlike the plot of Magnificent Obsession which I reviewed last week (in fact, thinking about how it's used in Cowboy Bebop has led me to reconsider its implications in Magnificent Obsession). In this case, it's also significant because it follows the hints from a couple episodes earlier that Spike has an artificial eye. Once again, we have the idea of someone's perceptions being changed by the world--Rocco's sister is blinded by some airborne phenomenon on terraformed Venus to which most people are immune. The young woman could not adapt the way most people could and this is partly why she seems so innocent. 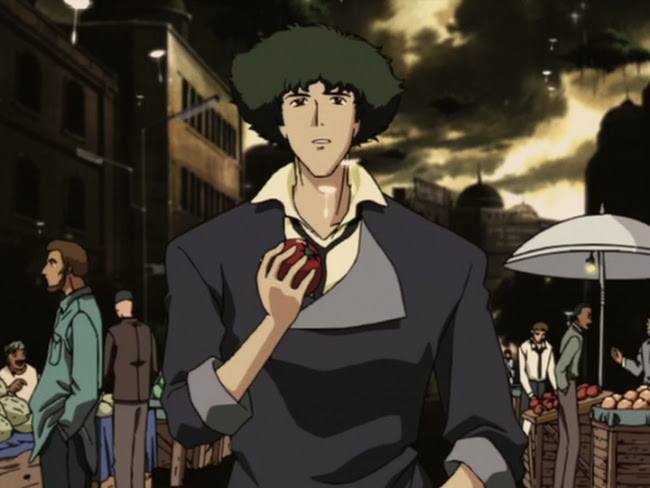 So it's appropriate that the episode ends with that ever potent symbol of sin--Spike eating an apple--as he watches spores floating down from the sky. Spike has adapted--consumed, even--this world and so he thrives. The young woman's blindness, we're told, is cured through the use of that plant, perhaps her own version of the apple.

This entry is part of a series of entries I'm writing on Cowboy Bebop for its 20th anniversary. I'm reviewing each episode individually. My previous episode reviews can be found here: