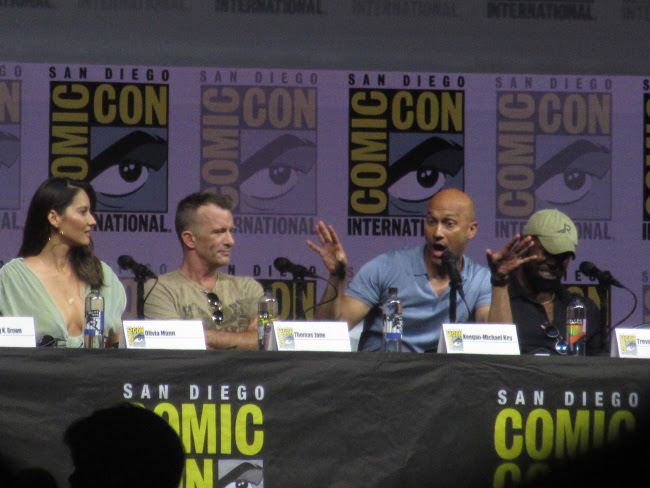 The first panel I saw in Hall H yesterday was for Shane Black's upcoming Predator movie, which distinguishes itself with the word "the" at the beginning. I had zero interest in the movie before yesterday but after the panel I kind of want to see it. Looks like the panel as a promotional tactic paid off this time. Primarily it's because of the cast--something the trailers never gave me a sense of in quite the way I got yesterday from one of the clips and from the chemistry of the actors just bantering on the panel. I'm barely acquainted with the work of most of these performers. I've always been kind of lukewarm on Olivia Munn, I loved Thomas Jane on The Expanse, and Keegan Michael Key I tend to enjoy about 15% of the time. He has a tendency to make a funny joke and then carry the premise very quickly past the breaking point. But all together, this group had a real chemistry with an honesty about it that made their individual faults likeable. Black talked about the fact that he had the actors rehearse a lot before filming, implying this was an unusual practice, but maybe it shouldn't be if it's responsible for the real sense of camaraderie I saw. Black said he was inspired by the ensemble chemistry in the original Predator.

The only awkward moment was when Olivia Munn called it a "micro-aggression" that women in movies generally didn't know how to use guns. So she said she insisted her character, a biologist, should at least have a basic idea of what to do when picking one up. The word "micro-aggression" always reminds me of Micro Machines. But otherwise everyone seemed to have a good time busting each others' chops. Sterling K. Brown and Keegan Michael Kay joked about trying to get Blaxploitation references into the film and Thomas Jane came off kind like Ringo Starr in A Hard Day's Night, the oddly glum member just slightly on a different wavelength from everyone else. Brown insisted Jane show the crowd his feet which Jane did, revealing he was barefoot. Apparently this is a lifestyle choice of Jane's. "It sounds like a joke but it's not," Brown explained to the laughing audience. Jane said with absolutely flawless glum sincerity, "I like to touch things with my feet." He apparently once belonged to a Barefoot Society but got kicked out. Munn said she didn't want him to be in this society which I guess doesn't count as a micro-aggression.

The moderator, Grae Drake from Rotten Tomatoes, wasn't bad though not the best I've seen. She took a selfie with the cast at the end and joked, "Someone's grabbing my ass!" but then seemed to remember the political pall currently cast over the industry and awkwardly added, "It's great!" Everyone in the audience received a Predator gift bag which included a card with concept art and, bizarrely, hand sanitizer. The whole panel's on YouTube here: